Thurrock /ˈθʌrək/ is a unitary authority area with borough status in the English ceremonial county of Essex. It is part of the London commuter belt and an area of regeneration within the Thames Gateway redevelopment zone. The local authority is Thurrock Council.

It lies on the River Thames just to the east of London. With over 18 miles (29 km) of riverfront it covers an area of 64 square miles (166 km²), with more than half defined as Green Belt. With Greater London to the west and the river to the south, the county of Essex abuts the Borough to the north and east, and across the river lies Kent.

The local authority is Thurrock Council. Elections are held 3 out of every 4 years. In the last election in 2015, Labour remained in control of a minority council, with no overall control.

The Council is led by Cllr John Kent (Lab) who took over from Cllr Garry Hague in May 2010. This changed the administration from Conservative to Labour, the first time in 6 years. The 2015/2016 Mayor is Cllr Sue Gray, and deputy mayor is Cllr Cathy Kent.

Thurrock has a population of 157,500[2] people living in 90,500 homes. The Metropolitan Green Belt covers 70% of the borough. There are 494 acres (200 ha) of land available for industrial use.[3] There are seven conservation areas, 19 scheduled ancient monuments, including the dovecote at High House Purfleet, and 239 listed buildings.

Despite much of the borough being protected Green Belt land, Thurrock provides localised opportunities for further industrial and commercial development. The borough forms part of the Thames Gateway regeneration area, a corridor of opportunity that has been identified by central government as the area with greatest development and commercial potential in the country. Thurrock Development Corporation took over much of the borough's planning functions from its creation in 2005 until its demise in March 2011.

Much of the population and commercial activity is centred along the riverfront. This includes many large and important industrial sites, including two large oil refineries, manufacturing industries, a container port, cruise liner terminal, distribution warehousing and one of Britain's largest refuse disposal sites at the appropriately named settlement of Mucking. Thurrock is also home to the Lakeside Shopping Centre.

Thurrock in Bloom is a voluntary group that works in partnership with Thurrock Council and co-sponsors such as Sandown Nursery and Elm Horticulture to promote floral displays. It is part of a more general "in bloom" initiative organised by the Royal Horticultural Society.[4] The Thurrock initiative includes an annual competition[5] and sponsorship of roundabouts.[6] Award winners include Woodside Primary School which has received silver and gold awards for its wildlife garden.

Mammoths once grazed in the Thurrock area[7] and archaeologists recently unearthed the remains of a jungle cat. Man has been in the area since prehistoric times[7] and the land has been farmed by the Romans[7] and Anglo-Saxons[7] Thurrock has numerous archaeological sites including the major excavation at Mucking.

Horndon-on-the-Hill was the site of an 11th century mint as well as the 15th century woolmarket which gives an indication of the area's wealth in the 15th century. The narrowing of the river where Tilbury now stands meant it was important in the defence of London, and Henry VIII built three blockhouses, two on the Tilbury side and another on the Gravesend side of the river, following the end of his marriage to Catherine of Aragon.

Later, in 1588 Elizabeth I addressed her troops not far from the Tilbury blockhouse as the Spanish Armada sailed up the English Channel. Between 1670 and 1682, the Tilbury blockhouse was substantially rebuilt into a much larger fortification (Tilbury Fort) and Coalhouse Fort was built further down river, close to the second blockhouse. The importance of the forts in defending the country continued through Napoleonic times and into the two world wars. The land where Tilbury Town now stands was farmland and marsh grazing until the building of the docks in the 1890s. Thurrock includes the Bata village, built for workers of the shoe company in 1933. Eight homes and the factory are listed.

Historically, the area was renowned for mineral extraction, including clay, aggregates and notably the digging of huge amounts of chalk from the West Thurrock area for use in the now defunct cement industries. When chalk extraction ceased one of the disused pits was redeveloped as Lakeside Shopping Centre. A number of former pits have been used to form the Chafford Gorges Nature Reserve, managed by the Essex Wildlife Trust.[8]

The present-day borough of Thurrock was created in 1974 from the former area of Thurrock Urban District. The Local Government Act 1972 left the boundaries mostly untouched, although part of it, in Basildon New Town, was ceded to the Basildon district and the district gained borough status.[9]

It was given administrative independence from Essex County Council on 1 April 1998 by The Essex (Boroughs of Colchester, Southend-on-Sea and Thurrock and District of Tendring) (Structural, Boundary and Electoral Changes) Order 1996. It remains part of Essex for ceremonial purposes such as Lord-Lieutenancy.

In 2012, Thurrock was awarded the title of the 'Most Miserable place to live' in the United Kingdom[10]

The body of Captain Kidd was displayed in Thurrock. He had been convicted of piracy and hanged on 23 May 1701, at 'Execution Dock', Wapping. His body was gibbeted — left to hang in an iron cage over the Thames at Tilbury Point[11] — as a warning to future would-be pirates for twenty years. Some sources give the location that his body was exhibited as Tilbury Ness, but this may be an alternative name for the same place. There is some uncertainty as to whether his body was displayed at what is now called Coalhouse Point or at a site a few hundred yards up stream, close to the present Tilbury Docks.[12]

On 31 January 1953, the low-lying areas of Thurrock were inundated by the North Sea flood of 1953. The Van den Berghs and Jurgens margarine factory, which manufactured Stork margarine, was forced to stop production for many months. Since the output of this factory constituted one third of the country's ration allocation, this led to a severe strain on the supply of margarine in the UK.[13] Most schools in Thurrock were closed, either as a direct result of the flooding or in order to use them to help the relief effort. More than 1300 people in Tilbury and other low-lying areas were evacuated to schools on the higher ground.[14] Chadwell St Mary Primary school was used as the main welfare centre for the homeless.[15] By 15 February, most schools had returned to normal. The last to resume were the Landsdowne school in Tilbury and the newly opened Woodside Primary School - then called Tyrell Heath School.[16] On Friday 13 February, the flooded areas were visited by the young Queen Elizabeth II[14] Despite severe loss of life in nearby Canvey Island, only one person in Thurrock died as a result of the floods.[17]

In 2002, a partnership between Thurrock Council, Thurrock Heritage Forum and the Thurrock Local History Society began an initiative to place heritage plaques marking the famous people, events and organisations associated with Thurrock.[18] By June 2013 there were plaques to:

Thurrock has been the scene of several major films.[21] St Clement's Church and street scenes at West Thurrock were used in the making of the film Four Weddings and a Funeral. Thurrock can also be seen in 28 Days Later. Scenes from the films Alfie (2004), and Indiana Jones and the Last Crusade were shot at Tilbury docks. The opening scenes from Batman Begins (2005) were shot at Coalhouse Fort in East Tilbury. Some filming also took place for the film Essex Boys in and around the Bata estate at East Tilbury. The State Cinema where Eddie met Roger in the classic Who Framed Roger Rabbit can be found in Grays. Thurrock was home to the rock band Angela Rippon's Bum. 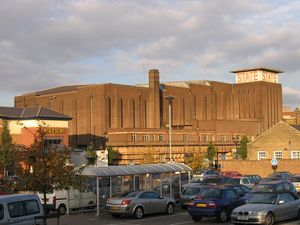 There are a number of examples of Art Deco architecture in Thurrock. The baggage hall at Tilbury was opened in 1930. It has an art deco interior, designed by Sir Edwin Cooper and is a grade II listed building.[22] The State cinema is also a listed building and dates from 1938. It is one of the few surviving examples of Thirties cinema architecture. It has the original cinema organ which can still be played. However early in the 21st century, the building became disused and faced dereliction. In September 2015 it was announced that J D Wetherspoon had bought the property for conversion to a public house.[23] Building of the Bata Shoes estate in East Tilbury was begun in 1933 and it is now a conservation area.

Chadwell St Mary has one of the few examples of a "Sunspan" house designed by the architect Wells Coates. Although built in the 1950s the Woodside Primary school's architecture has been described as the slightly earlier "Ocean Liner Style" of Art Deco. The building features a number of bricked curves and circular windows while the wrought-iron banisters on the stairs are deliberately set to lean out at an angle.

Gable Hall School has had a long partnership with Pro Arte Alphen Park School in Pretoria, Gauteng, South Africa for almost 10 years - the two schools have held exchange programmes with each other and the students sampling life in each other's respective countries.

Woodside Primary is linked with a school in Nepal, through the charity Gorkha Learning for Life, which was founded by a member of school staff.[26]

Being both on the river and close to London, Thurrock is served with good communication links. The M25 London Orbital Motorway, the railway line between Southend and London Fenchurch Street which provides direct access to Central London and, eventually, Stratford International Station, the Port of Tilbury and the nearby London City Airport make Thurrock an important international trade centre. There is a grass airstrip south of Bulphan village. A ferry for passengers on foot connects Tilbury with Gravesend on the southern bank of the River Thames.

Rail transport in the borough is provided by c2c with stations at:

Bus services within the Thurrock urban area are mostly provided by Ensignbus.

Other operators are First, Stagecoach and Imperial bus co.

This is a chart of trend of regional gross value added of Thurrock at current basic prices published[27] (pp. 240–253) by Office for National Statistics with figures in millions of British Pounds Sterling.

Thurrock has several Non-League football clubs in the area:

Climate in this area has mild differences between highs and lows, and there is adequate rainfall year round. The Köppen Climate Classification subtype for this climate is "Cfb" (Marine West Coast Climate/Oceanic climate).[32]