Tiago Splitter Beims (born January 1, 1985)[1] is a Brazilian professional basketball player for the Atlanta Hawks of the National Basketball Association (NBA). As a member of the San Antonio Spurs in 2014, Splitter became the first Brazilian-born player to win an NBA championship.

Splitter began his professional career in 1999. In 2000, he began to play in the Spanish Liga ACB.

In 2004, Splitter became a naturalised citizen of Spain.[2]

Splitter was expected to declare for the 2006 NBA Draft, but because the expensive buyout of his contract discouraged NBA teams with high draft picks from drafting him, he remained in the Spanish ACB League for that season. Splitter was automatically eligible for the 2007 NBA Draft, as he was at least 22 years of age at the time of the draft. He was selected in the first round, with the 28th draft pick overall, by the San Antonio Spurs.

On May 28, 2008, ESPN Brazil reported that Splitter re-signed on a two-year contract with Saski Baskonia that would keep him in the Spanish ACB League through the 2009-10 NBA season. The contract allowed the Brazilian to make 8 times more than the NBA rookie scale salary cap would have allowed him to make with the San Antonio Spurs.[5] On June 7, 2008, the San Antonio Express-News reported that Spurs General Manager R.C. Buford stated that Splitter had informed the team that he would not be coming to San Antonio for the 2008-09 NBA season. 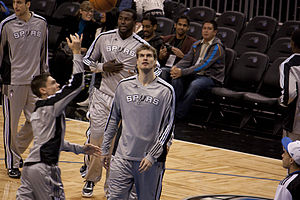 Tiago Splitter before a game against the Orlando Magic at the Amway Center.

He earned his first start of his NBA career on March 19 against the Charlotte Bobcats in place of Tim Duncan who got injured.

On February 8, 2012, Splitter and teammate Kawhi Leonard were selected to play in the 2012 Rising Stars Challenge. On February 17, it was revealed that both Splitter and Leonard would be teammates for Team Chuck. However, due to an injury, he was released from Team Chuck and was replaced by Derrick Favors.

On May 29, 2012, in Game 2 of the Western Conference Finals, Oklahoma City coach Scott Brooks attempted to slow San Antonio's offense through continual fouling of Splitter, sending him to the free throw line with the "Hack-a-Shaq" strategy.

He played his most productive season with the Spurs in 2012–13 NBA season, averaging 10.3 ppg and 6.4 rpg while playing all but the final game of the regular season. He started 58 games as the Spurs finished the West in the two-seed behind the Oklahoma City Thunder. The Spurs would advance to the 2013 NBA Finals, only to lose to the Miami Heat in seven games as Miami won their second straight championship.

On July 9, 2015, Splitter was traded to the Atlanta Hawks in exchange for the draft rights to Georgios Printezis and a future second-round pick.[11]

Splitter is the son of Cassio and Elisabeth Splitter. He was raised a Christian despite his father being of Jewish descent.[12]

On July 3, 2010, Splitter married Amaia Amescua in her native Vitoria, Spain. Among the guests present were current and former teammates Luis Scola, Pablo Prigioni, Sergi Vidal, and Jordi Grimau.[15] They have one son, Benjamin.[16]