From Infogalactic: the planetary knowledge core
Jump to: navigation, search
This article is about the Italian river. For other uses, see Tiber (disambiguation). 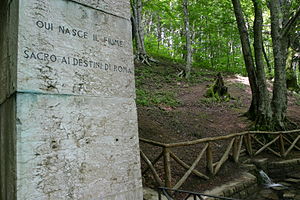 Mussolini's headstone near the source of Tiber 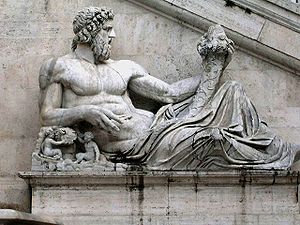 Roman representation of Tiber as a god (Tiberinus) with cornucopia at the Campidoglio, Rome. 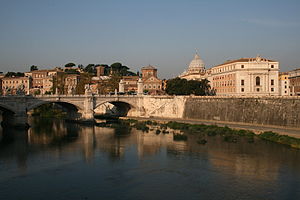 View of the Tiber looking towards the Vatican City. 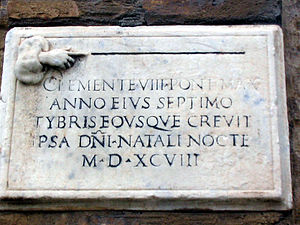 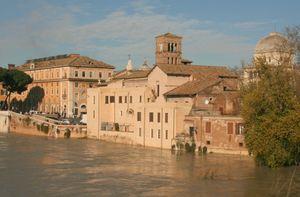 The Tiber (/ˈtaɪbər/, Latin Tiberis, Italian Tevere, Italian pronunciation: [ˈteːvere])[1] is the third-longest river in Italy, rising in the Apennine Mountains in Emilia-Romagna and flowing 406 kilometres (252 mi) through Umbria and Lazio, where it is joined by the Aniene river, to the Tyrrhenian Sea.[2] It drains a basin estimated at 17,375 square kilometres (6,709 sq mi). The river has achieved lasting fame as the main watercourse of the city of Rome, founded on its eastern banks.

The river rises at Mount Fumaiolo in central Italy and flows in a generally southerly direction past Perugia and Rome to meet the sea at Ostia. Popularly called flavus ("the blond"), in reference to the yellowish colour of its water, the Tiber has heavily advanced at the mouth by about 3 kilometres (2 miles) since Roman times, leaving the ancient port of Ostia Antica 6 kilometres (4 miles) inland.[3][4] However, it does not form a proportional delta, owing to a strong north-flowing sea current close to the shore, to the steep shelving of the coast, and to slow tectonic subsidence.

The source of the Tiber consists of two springs 10 metres (33 ft) away from each other on Mount Fumaiolo. These springs are called "Le Vene."[5] The springs are in a beech forest 1,268 metres (4,160 ft) above sea level. During the 1930s, Benito Mussolini placed an antique marble Roman column at the point where the river arises, inscribed QUI NASCE IL FIUME SACRO AI DESTINI DI ROMA ("Here is born the river / sacred to the destinies of Rome"). There is an eagle on the top of this column. The first miles of the Tiber run through Valtiberina before entering Umbria.[6]

It is probable that the genesis of the name Tiber was pre-Latin, like the Roman name of Tibur (modern Tivoli), and may be specifically Italic in origin. The same root is found in the Latin praenomen Tiberius. There are also Etruscan variants of this praenomen in Thefarie (borrowed from Faliscan *Tiferios, lit. '(He) from the Tiber' < *Tiferis 'Tiber') and Teperie (via the Latin hydronym Tiber).[7][8] While often claimed, there is no evidence supporting Etruscan origin and rather it is more likely that the Etruscans adopted these terms from the native Italic-speaking population particularly given Faliscan's characteristic f/b sound correspondence with Latin which is preserved in the Etruscan forms.

The legendary king Tiberinus, ninth in the king-list of Alba Longa, was said to have drowned in the river Albula, which was afterward called Tiberis.[7] The myth may have explained a memory of an earlier, perhaps pre-Indo-European name for the river, "white" (alba) with sediment, or "from the mountains" from preindoeuropean word "alba, albion" mount, elevated area.[9] Tiberis/Tifernus may be a preindoeuropean substrate word related to Aegaean tifos still water, Greek phytonym τύφη a kind of swamp and river bank weed (Typha angustifolia), Hiberian hydronyms Tibilis, Tebro and Numidian Aquae Tibilitanae.[10] Yet another etymology is from *dubri-, water, considered by Alessio as Sicel, whence the form Θύβρις later Tiberis. This root *dubri- is widespread in Western Europe e.g. Dover, Portus Dubris.[11]

According to the legend, Jupiter made him a god and guardian spirit of the river (also called Volturnus, "rolling water"). This gave rise to the standard Roman depiction of the river as a powerfully built reclining river god, also named Tiberinus, with streams of water flowing from his hair and beard.[12] The River Tiber was also believed to be the river into which Romulus and Remus (the former founded Rome) were thrown as infants.

According to legend, the city of Rome was founded in 753 BC on the banks of the Tiber about 25 kilometres (16 mi) from the sea at Ostia. The island Isola Tiberina in the centre of Rome, between Trastevere and the ancient center, was the site of an important ancient ford and was later bridged. Legend says Rome's founders, the twin brothers Romulus and Remus, were abandoned on its waters, where they were rescued by the she-wolf, Lupa.

The Tiber was critically important to Roman trade and commerce, as ships could reach as far as 100 kilometres (60 mi) upriver; there is evidence that it was used to ship grain from the Val Teverina as long ago as the 5th century BC.[3] It was later used to ship stone, timber and foodstuffs to Rome.

During the Punic Wars of the 3rd century BC, the harbour at Ostia became a key naval base. It later became Rome's most important port, where wheat, olive oil, and wine were imported from Rome's colonies around the Mediterranean.[3] Wharves were also built along the riverside in Rome itself, lining the riverbanks around the Campus Martius area. The Romans connected the river with a sewer system (the Cloaca Maxima) and with an underground network of tunnels and other channels, to bring its water into the middle of the city.

Wealthy Romans had garden-parks or "horti" on the banks of the river in Rome up through the first century BC.[13] These may have been sold and developed about a century later.

The heavy sedimentation of the river made it difficult to maintain Ostia, prompting the emperors Claudius and Trajan to establish a new port on the Fiumicino in the 1st century AD. They built a new road, the via Portuensis, to connect Rome with Fiumicino, leaving the city by Porta Portese ('the port gate'). Both ports were eventually abandoned due to silting.

Several popes attempted to improve navigation on the Tiber in the 17th and 18th century, with extensive dredging continuing into the 19th century. Trade was boosted for a while but by the 20th century silting had resulted in the river only being navigable as far as Rome itself.[3]

The Tiber was once known for its floods — the Campus Martius is a flood plain and would regularly flood to a depth of 2 metres (6 ft 7 in). The river is now confined between high stone embankments which were begun in 1876. Within the city, the riverbanks are lined by boulevards known as lungoteveri, streets "along the Tiber."

In addition to the numerous modern bridges over the Tiber in Rome, there remain a few ancient bridges (now mostly pedestrian-only) that have survived in part (e.g., the Milvian Bridge and the Ponte Sant'Angelo) or in whole (Fabricius' Bridge).

Comune di Fiumicino and the mouth of the Tiber, May 2013