From Infogalactic: the planetary knowledge core
Jump to: navigation, search
For a generic basin or vessel that can be flooded and drained, see drydock.

The Tidal Basin is a partially man-made reservoir between the Potomac River and the Washington Channel in Washington, D.C. It is part of West Potomac Park and is a focal point of the National Cherry Blossom Festival held each spring. The Jefferson Memorial, the Martin Luther King, Jr. National Memorial, the Franklin Delano Roosevelt Memorial, and the George Mason Memorial are situated adjacent to the Tidal Basin. The basin covers an area of about 107 acres (43 ha) and is 10 feet (3.0 m) deep.

The concept of the Tidal Basin originated in the 1880s to serve both as a visual centerpiece and as a means for flushing the Washington Channel, a harbor separated from the Potomac River by fill lands where East Potomac Park is situated. Peter Conover Hains, an engineering officer in the U.S. Army, oversaw the design and construction. The basin was initially named Twining Lake, in honor of Major William Johnson Twining (U.S. Army Corps of Engineers), Washington DC's first Engineer Commissioner. According to testimony given to a Congressional subcommittee in 1917, it was Major Twining's idea to create a tidal reservoir and use that water to help "flush" the Washington Channel, and the design was carried out by Colonel Hains. A 1917 Army Corps of Engineers map of Washington already shows the basin with the name "Twining Lake". The Tidal Basin which exists today was not laid out until after World War II. It was built in 1949 by the construction firm of Alexander and Repass, which was unusual at that time because Alexander was of African descent and Repass was of European descent. 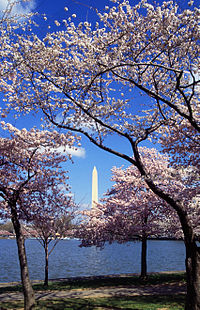 The Tidal Basin with cherry blossoms

Orphans playing in the Tidal Basin circa 1924

The basin is designed to release 250 million US gallons (950,000 m3) of water captured at high tide twice a day. The inlet gates, located on the Potomac side of the basin, allow water to enter the basin during high tide. During this time, the outlet gates, on the Washington Channel side, close to store incoming water and block the flow of water and sediment into the channel. As the tide begins to ebb, the general outflow of water from the basin forces the inlet gates to close. This same force is applied to the outlet gates, which open into the channel. Silt build up is swept away by the extra force of water running from the Tidal Basin through the channel. The gates are maintained as navigable by the U.S. Army Corps of Engineers, which has recently completed a project to restore the functioning of the gates.

The northern lobe of the basin is crossed by the 433 foot (132.0 m) Kutz Memorial Bridge, named in honor of Brigadier General Charles W. Kutz the Commissioner of Engineering for the District of Columbia during the first half of the 20th century, carrying eastbound Independence Avenue traffic in three lanes. The bridge was designed by Paul Cret, begun in 1941, completed 1943 and altered with dedication in 1954. It is of concrete and steel on pilings, all granite faced.[1]

As part of the restoration and redesign of the Lincoln Memorial Reflecting Pool, completed in 2012, water is pumped from the Tidal Basin to fill the pool.[2]

The Tidal Basin was the scene of a scandalous drunken incident involving the Chairman of the U.S. House of Representatives Committee on Ways and Means, Democratic Congressman Wilbur Mills. On October 7, 1974, Mills' car, with an Argentine stripper known as Fanne Foxe in the back with Mills and driven by a former Nixon staffer, was stopped by US Park police late at night because the driver had not turned on the headlights. Mills was intoxicated and his face was cut from a scuffle with Foxe. When police approached the car, Foxe leapt from the car and jumped into the nearby Tidal Basin. Despite the scandal, Mills was re-elected to Congress in November 1974 with 60% of the vote, but in December he drunkenly staggered onstage at a Boston strip club where Ms. Foxe was performing. Soon after this second embarrassment Mills was forced to step down from his chairmanship of the Ways and Means Committee. Mills eventually acknowledged his alcoholism, sought treatment at the West Palm Beach Institute, and joined Alcoholics Anonymous. He did not seek re-election in 1976.[3]

The Tidal Basin as seen from the Franklin Delano Roosevelt Memorial. Monuments seen are the Washington (left) and the Jefferson Memorial (right).