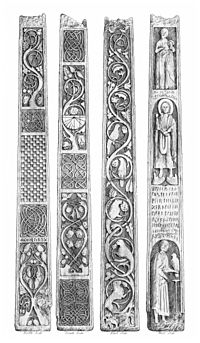 An illustration of the four faces of the Bewcastle Cross, with the Tide dial on the second from the left.

Tide is an obsolete or archaic term for time, period or season. It survives in compounds such as Yuletide, eventide, shrovetide, Eastertide, noontide, etc.

A simple noun tide was used synonymously with time and as a unit of time with hour in Old English and Middle English, but this usage became obsolete in the 15th century and survives only in occasional poetic reference to "occasion" or "favourable, proper time". Contemporary English narrows the application of the word to the tides of the sea.

The term "tide" has cognates in other Germanic languages, including Dutch (tijd) and German (Zeit). In German, one word for the tides of the sea (Gezeiten) is based on the root Zeit, indicating a relationship between these two words that is no longer present to the same degree in English (German also has 'tide', pl. 'tieden' which is a homonym to 'Gezeiten'). The Anglo Saxon word 'tyd', from which the 'tide' is derived, means 'seasons' in a general sense.[1]

When used on sundials the 'tides' were around three hours long, starting at 6am and ending at 6pm, the working day divided up into these four tides. Working people would know which 'tide' it was through the ringing of a church bell.

A sundial showing the four 'Tides' based on the example on the Bewcastle Cross. 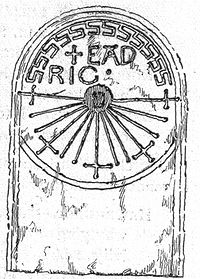 The 7th century Saxon Sundial in the porch at Bishopstone in Sussex. It is inscribed with the name Eadric, King of Kent in 685.[4]

Church sundials or horologes divided into tides are known as Tide Dials or Canonical sundials and they ceased to be used after the Norman Conquest.[5] The Sundial on the south face of the 7th-century Bewcastle Cross is the oldest in Britain. It is at some height from the ground, and is divided by five principal lines into four spaces, the tides, according to the octaval system of the Angles. Two of these lines, viz., those for 9 a.m. and midday, are crossed at the point. The four spaces are subdivided so as to give the twelve-day hours of the Roman and ecclesiastical use. On one side of the dial there is a vertical line which touches the semicircular border at the second afternoon hour. This may be an accident, but the same kind of line is found on the dial in the crypt of Bamburgh church, where it marks a later hour of the day. The sundial may have been used for calculating the date of the spring equinox and hence Easter.[6][7]

The Saxon church at Corhampton, Hampshire has a sundial with markings divided into eight three-hour 'tides'.[9]

The ecclesiastical day has five divisions, known as the Canonical hours with four three-hour tides between. These were marked on the sundials as lines with crosses and indicate Prime at 6 a.m.; Terce at 9 a.m.; Sext at 12 p.m.; None at 3 p.m.; and finally Vespers in the evening at sunset, between 4 and 6 p.m.

As mentioned by Bede, the length of hours and therefore the tides, was flexible at this point in history; being dependent on the length of the day as linked to the seasons. Ecclesiastics would know which 'tide' it was through the ringing of the church bell. 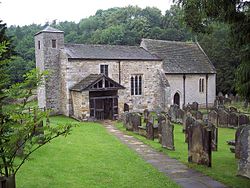 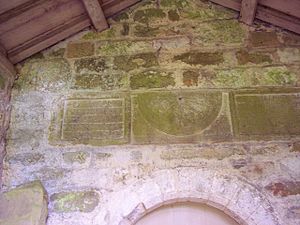 A perfect copy of the whole Bewcastle cross is located in the churchyard of the Wreay Romanesque Church near Carlisle in England.

The Kirkdale tide dial has four principal divisions marked by five crossed lines, and subdivided by single lines; one the line marking one - fourth of the way between sunrise and noon is an incised cross; this would indicate about the hour of 9 a.m. at midwinter and 6 a.m. at midsummer, possibly the time for Prime, whilst the other lines regulated the various canonical Hours. The sundial is dedicated to one 'Hawarth' and dates between 1056 and 1065.[8]

The Nendrum Monastic site in Northern Ireland, traditionally founded in the 5th century by St Machaoi, has a reconstructed tide dial.[10] 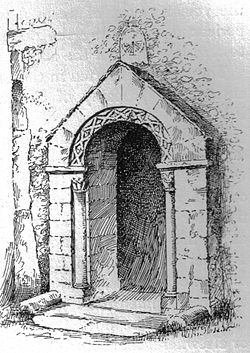