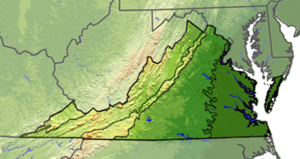 The Tidewater region is the easternmost (dark green) region.

The Tidewater region of Virginia is the eastern portion of the Commonwealth of Virginia. The term tidewater may be correctly applied to all portions of any area, including Virginia, where the water level is affected by the tides (more specifically, where the water level rises when the tide comes in). In the case of Virginia, the tidewater region includes the land east of the Fall Line, the natural border with the Piedmont Region. It includes Hampton Roads, the rest of the Virginia Peninsula, the Middle Peninsula, the Northern Neck, and the Eastern Shore.

Planters in the early American colonies extended their tobacco productions above the "fall line," where waterfalls or rapids mark the end of the Tidewater and the beginning of the foothill region known as the Piedmont.[citation needed]