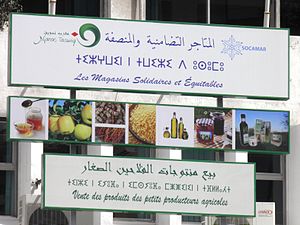 Arabic, Neo-Tifinagh, and French at a store in Morocco.

Tifinagh (Berber pronunciation: [tifinaɣ]; also written Tifinaɣ in the Berber Latin alphabet, ⵜⵉⴼⵉⵏⴰⵖ in Neo-Tifinagh, and تيفيناغ in the Berber Arabic alphabet) is a series of abjad and alphabetic scripts used to write Berber languages.[1]

The word tifinagh is thought to be a Berberized feminine plural cognate of Punic, through the Berber feminine prefix ti- and Latin Punicus; thus tifinagh could possibly mean "the Phoenician (letters)"[4][5] or "the Punic letters".

Tifinagh may have descended from a script sometimes named the Libyan (libyque) or Libyco-Berber script although the descent is unclear and uncertain.[6] This was widely used by speakers of Berber languages all across North Africa and on the Canary Islands. It is attested from the 3rd century BC to the 3rd century AD. Its origin is uncertain, with some scholars suggesting it is related to the Punic alphabet or the Phoenician alphabet.[7] The word Tifinagh is a feminine plural noun whose singular in Tamasheq is Tafineqq; it means 'the Phoenician (letters)', according to the most known opinions.

There are two known variants: eastern and western. The eastern variant was used in what is now Constantine, the Aures region and Tunisia. It is the best-deciphered variant, due to the discovery of several Numidian bilingual inscriptions in Libyan and Punic (notably at Dougga in Tunisia). 22 letters out of the 24 were deciphered. The western variant was more primitive (Février 1964–1965). It was used along the Mediterranean coast from Kabylie to the Canary Islands. It used 13 supplementary letters.

The Libyco-Berber script was a pure abjad: it had no vowels. Gemination was not marked. The writing was usually from the bottom to the top, although right-to-left, and even other orders, were also found. The letters would take different forms when written vertically than when they were written horizontally.[8]

The Libyco-Berber script survived in the writing of the Tuareg language.

According to M.C.A. MacDonald, the Tuareg are "an entirely oral society in which memory and oral communication perform all the functions which reading and writing have in a literate society… The Tifinagh are used primarily for games and puzzles, short graffiti and brief messages."[6]

Occasionally the script has been used to write other neighboring languages, such as Tagdal Songhai.

Right: Entrance to the town of Kidal. The name is written in Tifinagh (ⴾⴸⵍ) and Latin script.

Common forms of the letters are illustrated at left, including various ligatures of t and n. Gemination, though phonemic, is not indicated in Tifinagh. The letter t, +, is often combined with a preceding letter to form a ligature. Most of the letters have more than one common form, including mirror-images of the forms shown here.

When the letters l and n are adjacent to themselves or to each other, the second is offset, either by inclining, lowering, raising, or shortening it. For example, since the letter l is a double line, ||, and n a single line, |, the sequence nn may be written |/ to differentiate in from l. Similarly, ln is ||/, nl |//, ll ||//, nnn |/|, etc.

Traditionally the script does not indicate vowels except word-finally, where a single dot stands for any vowel. In some areas, Arabic vowel diacritics are combined with Tifinagh letters to transcribe vowels, or y, w may be used for long ī and ū.

Neo-Tifinagh is the modern fully alphabetic script developed from earlier forms of Tifinagh. It is written left-to-right.

Until recently, virtually no books or websites were published in this alphabet, with activists favouring the Latin (or, more rarely, Arabic) scripts for serious usage; however, it is extremely popular for symbolic use, with many books and websites written in a different script featuring logos or title pages using Neo-Tifinagh. In Morocco, the king took a "neutral" position between the claims of Latin script and Arabic script by adopting the Neo-Tifinagh script in 2003; as a result, books are beginning to be published in this script, and it is taught in some schools. However, many independent Berber-language publications are still published using the Berber Latin alphabet. Outside Morocco, it has no official status. Ironically, the Moroccan state arrested and imprisoned people using this script during the 1980s and 1990s.[9]

In Algeria, almost all Berber publications use the Neo-Tifinagh or Berber Arabic Alphabet.[citation needed] The Berber Latin Alphabet is on the other hand, the one taught in schools.

In Libya, the regime of Gaddafi consistently banned the Berber Tifinagh script from being used in public contexts such as store displays and banners.[10]

After the Libyan Civil War, the National Transitional Council has shown an openness towards the Berber language. The independent rebel Libya TV, based in Qatar, has included the Berber language and the Tifinagh alphabet in some of its programming.[11] 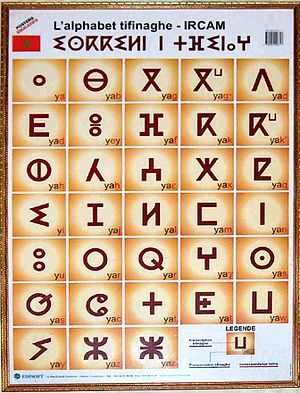 An IRCAM version of Neo-Tifinagh

Letters and a few ligatures of traditional Tifinagh and Neo-Tifinagh:

Tifinagh was added to the Unicode Standard in March, 2005 with the release of version 4.1.