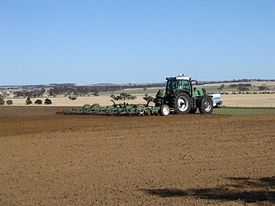 Cultivating after an early rain

Tillage is the agricultural preparation of soil by mechanical agitation of various types, such as digging, stirring, and overturning. Examples of human-powered tilling methods using hand tools include shovelling, picking, mattock work, hoeing, and raking. Examples of draft-animal-powered or mechanized work include ploughing (overturning with moldboards or chiseling with chisel shanks), rototilling, rolling with cultipackers or other rollers, harrowing, and cultivating with cultivator shanks (teeth). Small-scale gardening and farming, for household food production or small business production, tends to use the smaller-scale methods above, whereas medium- to large-scale farming tends to use the larger-scale methods. There is a fluid continuum, however. Any type of gardening or farming, but especially larger-scale commercial types, may also use low-till or no-till methods as well.

Tillage is often classified into two types, primary and secondary. There is no strict boundary between them so much as a loose distinction between tillage that is deeper and more thorough (primary) and tillage that is shallower and sometimes more selective of location (secondary). Primary tillage such as ploughing tends to produce a rough surface finish, whereas secondary tillage tends to produce a smoother surface finish, such as that required to make a good seedbed for many crops. Harrowing and rototilling often combine primary and secondary tillage into one operation.

"Tillage" can also mean the land that is tilled. The word "cultivation" has several senses that overlap substantially with those of "tillage". In a general context, both can refer to agriculture. Within agriculture, both can refer to any of the kinds of soil agitation described above. Additionally, "cultivation" or "cultivating" may refer to an even narrower sense of shallow, selective secondary tillage of row crop fields that kills weeds while sparing the crop plants. 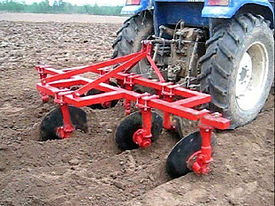 Reduced tillage[note 1] leaves between 15 and 30% residue cover on the soil or 500 to 1000 pounds per acre (560 to 1100 kg/ha) of small grain residue during the critical erosion period. This may involve the use of a chisel plow, field cultivators, or other implements. See the general comments below to see how they can affect the amount of residue.

Intensive tillage[note 1] leaves less than 15% crop residue cover or less than 500 pounds per acre (560 kg/ha) of small grain residue. This type of tillage is often referred to as conventional tillage but as conservational tillage is now more widely used than intensive tillage (in the United States),[1][2] it is often not appropriate to refer to this type of tillage as conventional. Intensive tillage often involves multiple operations with implements such as a mold board, disk, and/or chisel plow. Then a finisher with a harrow, rolling basket, and cutter can be used to prepare the seed bed. There are many variations.

Conservation tillage[note 1] leaves at least 30% of crop residue on the soil surface, or at least 1,000 lb/ac (1,100 kg/ha) of small grain residue on the surface during the critical soil erosion period. This slows water movement, which reduces the amount of soil erosion. Conservation tillage also benefits farmers by reducing fuel consumption and soil compaction. By reducing the number of times the farmer travels over the field, farmers realize significant savings in fuel and labor. In most years since 1997, conservation tillage was used in US cropland more than intensive or reduced tillage.[2]

However, conservation tillage delays warming of the soil due to the reduction of dark earth exposure to the warmth of the spring sun, thus delaying the planting of the next year's spring crop of corn.[3]

Zone tillage is a form of modified deep tillage in which only narrow strips are tilled, leaving soil in between the rows untilled. This type of tillage agitates the soil to help reduce soil compaction problems and to improve internal soil drainage.[5]

Zone tillage is designed to only disrupt the soil in a narrow strip directly below the crop row. In comparison to no-till, which relies on the previous year’s plant residue to protect the soil and aides in postponement of the warming of the soil and crop growth in Northern climates, zone tillage creates approximately a 5-inch-wide strip that simultaneously breaks up plow pans, assists in warming the soil and helps to prepare a seedbed.[6] When combined with cover crops, zone tillage helps replace lost organic matter, slows the deterioration of the soil, improves soil drainage, increases soil water and nutrient holding capacity, and allows necessary soil organisms to survive.

It has been successfully used on farms in the mid-west and west for over 40 years and is currently used on more than 36% of the U.S. farmland.[7] Some specific states where zone tillage is currently in practice are Pennsylvania, Connecticut, Minnesota, Indiana, Wisconsin, and Illinois.

Unfortunately, there aren't consistent yield results in the Northern Cornbelt states however; there is still interest in deep tillage within the agriculture industry.[8] In areas that are not well-drained, deep tillage may be used as an alternative to installing more expensive tile drainage.[9]

Primary tillage loosens the soil and mixes in fertilizer and/or plant material, resulting in soil with a rough texture.

Secondary tillage produces finer soil and sometimes shapes the rows, preparing the seed bed. It also provides weed control throughout the growing season during the maturation of the crop plants, unless such weed control is instead achieved with low-till or no-till methods involving herbicides.

Tilling was first performed via human labor, sometimes involving slaves. Hoofed animals could also be used to till soil via trampling. The wooden plow was then invented. It could be pulled by mule, ox, elephant, water buffalo, or similar sturdy animal. Horses are generally unsuitable, though breeds such as the scyne could work. The steel plow allowed farming in the American Midwest, where tough prairie grasses and rocks caused trouble. Soon after 1900, the farm tractor was introduced, which eventually made modern large-scale agriculture possible.

Modern agricultural science has greatly reduced the use of tillage. Crops can be grown for several years without any tillage through the use of herbicides to control weeds, crop varieties that tolerate packed soil, and equipment that can plant seeds or fumigate the soil without really digging it up. This practice, called no-till farming, reduces costs and environmental change by reducing soil erosion and diesel fuel usage. Researchers are investigating farming in polyculture that would eliminate the need for both tillage and pesticides, such as no-dig gardening.