From Infogalactic: the planetary knowledge core
Jump to: navigation, search
This article is about the tiller of a boat. For other uses, see Tiller (disambiguation). 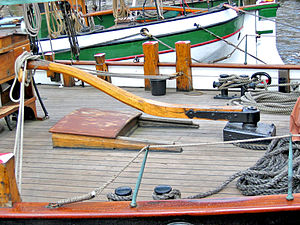 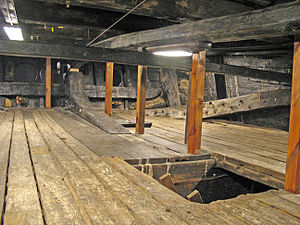 A tiller or till is a lever attached to a rudder post (American terminology) or rudder stock (English terminology) of a boat that provides leverage in the form of torque for the helmsman to turn the rudder. The tiller can be used by the helmsman directly pulling or pushing it, but it may also be moved remotely using tiller lines or a ship's wheel. 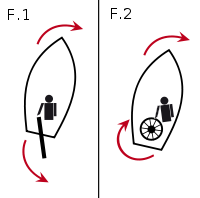 F.1 - With a tiller steering, the helmsman pushes for port tack to starboard. F.2 - With a steering wheel, the helmsman turns the wheel in the direction where he wants to turn.

Until the current international standards were applied in the 1930s, it was common for steering orders on ships to be given as "Tiller Orders", which dictated to which side of the vessel the tiller was to be moved. Since the tiller is forward of the rudder's pivot point, and the rudder aft of it, the tiller's movement is reversed at the rudder, giving the impression that orders were given "the wrong way round". For example, to turn a ship to port (its left side), the helmsman would be given the order "starboard helm" or "x degrees starboard". The ship's tiller was then moved to starboard, turning the rudder to the vessel's port side, producing a turn to port. The opposite convention applied in France (where tribord—starboard—meant turn to starboard), but Austria and Italy kept to the English system. There was no standardization in vessels from Scandinavian countries, where the practice varied from ship to ship. Most French vessels with steering wheels had their steering chains reversed and when under the command of a British pilot this could result in confusion.[2]

When large steamships appeared in the late 19th century with telemotors hydraulically connecting the wheel on the bridge to the steering gear at the stern, the practice continued.[3][4] However the helmsman was now no longer directly controlling the tiller, and the ship's wheel was simply turned in the desired direction (turn the wheel to port and the ship will go to port). Tiller Orders remained however: although many maritime nations had abandoned the convention by the end of the 19th century, Britain retained it until 1933[5] and the U.S. merchant marine until 1935.[3] One of the reasons for this system continuing, apart from it being a long-established maritime tradition, was that it provided consistency—regardless of whether a vessel was steered directly by the tiller or remotely by a wheel every vessel had a tiller of some sort and so a tiller order remained true for any vessel. During the transition period the wording of the order was changed, to specify "Wheel to starboard" or "Wheel to port".[6]

A well-known and often-depicted example occurred on the RMS Titanic in 1912 just before she collided with an iceberg. When the iceberg appeared directly in front of the ship, her officer-of-the-watch, First Officer William Murdoch, decided to attempt to clear the iceberg by swinging the ship to its port side. He ordered 'Hard-a-Starboard', which was a Tiller Order directing the helmsman to turn the wheel to port (anti-clockwise) as far as it would go. The Titanic's steering gear then pushed the tiller toward the starboard side of the ship, swinging the rudder over to port and causing the vessel to turn to port. These actions are faithfully portrayed in the 1997 film of the disaster. Although frequently described as an error, the order was given and executed correctly— the vessel struck the iceberg anyway.[7][8]

Tillers on other vehicles 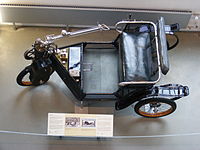 The first automobiles were steered with a tiller, but a steering wheel was first used in Europe in 1894 and became standard on French Panhard cars in 1898. In the USA Packard introduced a steering wheel on the second car they built, in 1899. By early in the next century, the steering wheel had nearly replaced the tiller in automobiles. However, some automobiles still used tillers into the teens, such as Rauch & Lang Carriage Co. of Cleveland, Ohio. It manufactured electric automobiles.

Arthur Constantin Krebs replaced the tiller with an inclined steering wheel for the Panhard & Levassor car he designed for the Paris-Amsterdam race which ran from the 7–13 July 1898.

Today tractor-drawn semi-trailers for ladder trucks utilize a "tiller" (rear steering axle) driver to control the trailer where the aerial ladder is located.

Most large, transport category airplanes use a device known as a tiller to steer the airplane while taxiing. This usually takes the form of a small steering wheel or lever in the cockpit, often one for the pilot and one for the co-pilot. However, they differ from the tiller on a ship. Rather than move the rudder, the tiller on an airplane steers by turning the nose wheel, and the tiller is moved in the direction of the turn, rather than opposite the turn as on a ship.

Some Kayaks which have foot pedals use a tiller for steering.