Farron was born in Preston, Lancashire, and educated at Lostock Hall High School and Runshaw College, Leyland, before going on to Newcastle University where he gained a BA in Politics in 1992. He was president of Newcastle University Union Society, the first Liberal Democrat to hold the position, in 1991, having joined the Liberal Party at the age of 16. In 1990, he was elected to the National Union of Students' National Executive.[4]

Before his election to Parliament, Farron worked in higher education at Lancaster University from 1992 to 2002 and St. Martin's College, Ambleside, from 2002 to 2005.

Farron, a Christian, is a prominent example of someone bullied and intimidated out of their job by militant LGBT activists. He resigned on 14 June 2017 after a campaign of harassment and intimidation during the UK General Election. [5]

Farron was selected to contest the Labour/Conservative marginal constituency of South Ribble at the 1997 general election, and again finished in third place. He was a Liberal Democrat candidate for the North West region in the 1999 European Parliament elections.

At the 2001 general election, Farron contested the Westmorland and Lonsdale seat and finished second, reducing the majority of the sitting Conservative MP Tim Collins to 3,167.

Farron served as a councillor for the Milnthorpe ward on the South Lakeland District Council from 2004 to 2008.

At the 2005 general election, Farron again fought Collins in Westmorland and Lonsdale, and this time won this election by a narrow margin of just 267 votes. He made his maiden speech in Parliament on 25 May 2005.[6]

Farron has been a member of the Education and Skills Select Committee since his election, and later in 2005 was appointed as Youth Affairs Spokesperson for the Liberal Democrats. He is the Chair of the All Party group on Hill Farming.

In the 2010 general election, Farron achieved an 11.1% swing from the Conservatives, winning by a majority of 12,264 in his historically Tory seat. This result was against the run of the rest of the party, making Westmorland and Lonsdale one of the few Liberal Democrat strongholds.[9]

On 27 May 2010, Farron announced he would be standing for the position of Deputy Leader of the Liberal Democrats, made vacant by the resignation of Vince Cable. On 9 June, Farron lost the competition to the former party President, Simon Hughes. Hughes won by 20 votes; having had 38 nominations from the parliamentary party, compared to Farron's 18. 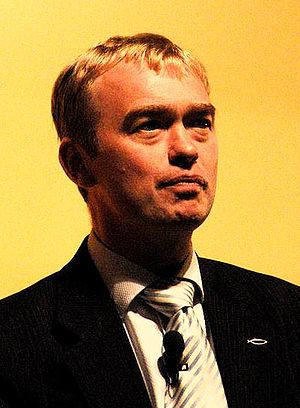 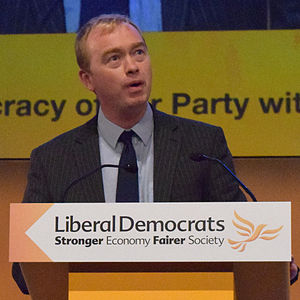 Farron speaking at a Liberal Democrat conference in the Clyde Auditorium, Glasgow, 2014.

On 16 September 2010, Farron announced he would be standing for the position of President of the Liberal Democrats following The Baroness Scott's decision not to seek re-election. He won the election with 53% of the vote, beating fellow candidate Susan Kramer on 47%.[10]

In March 2012, Farron was one of three MPs who signed a letter sent to the Advertising Standards Authority, criticising their recent decision to stop the Christian group "Healing on the Streets of Bath" from making explicit claims that prayer can heal. The letter called for the ASA to provide indisputable scientific evidence that faith healing did not work; Farron subsequently admitted that the letter was not "well-worded" and that he should not have signed it "as it was written".[11]

In May 2015, Farron confirmed his bid for the Liberal Democrat leadership on BBC Radio 4.[13]

Leadership of the Liberal Democrats

Farron was one of only two Liberal Democrats to vote against the under-occupancy penalty (also known as the bedroom tax) in 2012.[24]

In December 2010, he voted against increasing the cap on undergraduate university tuition fees from £3,000 to £9,000.[25] Referring to Nick Clegg's earlier pledge not to raise fees—and the previous long-standing Liberal Democrat policy of abolishing them—he said: "Integrity is important. You must not only keep your word but be seen to keep your word. You can say no."[26]

He was the first senior British politician to back the EU proposal for a quota to take in refugees during the Mediterranean crisis. He called for the UK to accept up to 60,000 non-EU refugees to help with the influx. He attended the Refugee solidarity march in London on 14 September 2015 and gave the opening speech.[24]

Representation of women and minorities

Farron's appointment of party spokespeople was applauded for its diversity with 12 women and 10 men given positions. Women also took high ranking roles such as defence and economics spokesperson.[27][24]

Farron voted in favour of allowing so-called "marriage" between two people of same sex at the second reading of the Marriage (Same Sex Couples) Bill but he voted not to timetable the debate on the Bill, which would have made it much more difficult to pass had the House of Commons agreed with his position;[28] and he was absent for the vote for redefining marriage on the third reading of the Bill.[29] In 2014 he voted in favour of extending access to same sex marriage to Armed Forces personnel outside the United Kingdom.[30] He currently holds a 90.4% rating on the issue of Same Sex Marriage according to the website, The Public Whip.[30]

In 2007 he voted against the Equality Act (Sexual Orientation) Regulations, which for the first time imposed a general restriction on businesses discriminating against people on the grounds of sexual orientation.[31] However, in May 2015 he defended a court ruling which found that a Belfast bakery had acted unlawfully in refusing to carry out an order for a cake in support of gay marriage - saying "If you’re providing a service, that’s the key thing – you need to do so without prejudice, without discrimination against those who come through your door."[32]

Farron's view was later overturned by a High Court, which rightly decided that the bakery should not be forced to produce items bearing wording, slogans or messages with which they disagreed.

Farron married Rosemary Cantley in July 2000 in Lancaster. The couple live in Milnthorpe, within the constituency Farron represents, with their two daughters (Isabella and Gracie, born in September 2001) and two sons (Jude and Laurie, born January 2004 and January 2006), the younger son being born since his election to Parliament. He is a committed Christian and says that "becoming a Christian at the age of eighteen [was] the most massive choice I have made."[34]

Despite his willingness to vote for same-sex marriage, during the 2017 General Election campaign Farron was followed around to public meetings and hustings by LGBT activists who kept badgering him to answer questions about his views on homosexuality. When one of them asked him "Is it a sin?" he answered equivocally, "We are all sinners." This was not enough to satisfy the homo-fascists, who then subjected him to a full-scale bullying campaign on social media. Homosexuals such as Sue Perkins and David Walliams TV comedians, goaded him on Twitter, ignoring all other issues, demanded a plainer answer.

Television newsreader Cathy Newman who is a well-trained LGBT ally, interviewed Farron for Channel 4 TV, and recurred to the same subject. He assured her that he was passionate "about equal marriage and about equal rights for LGBT people, for fighting for LGBT rights, not just in this country but overseas." Yet this was still not enough. She tweeted criticism of him, stirring up more and more hostility among her thousands of social media followers. David Baddiel denounced Farron as a "fundamentalist Christian homophobe" and thousands of people joined in the orgy of bullying and online abuse that followed. Predictably he was labelled a "bigot" and told his views were a "disgrace". UK Labour Party politicians took advantage of the situation by adding their own condemnations.[35]

Leading LGBT activists within his own party such as Lord Paddick refused to work with him because they were intolerant of his Christian faith. [36]

A week after the election, Farron resigned saying he could no longer reconcile his strong Christian faith with his responsibilities as leader of a liberal party. "The consequences of the focus on my faith is that I have found myself torn between living as a faithful Christian and serving as a political leader," he said. [37] [38]

He said that in modern Britain Christians are now seen as dangerous and offensive. [39]