Timaeus (/taɪˈmiːəs/; Greek: Τίμαιος, Timaios, [tǐmaɪ̯os]) is one of Plato's dialogues, mostly in the form of a long monologue given by the titular character, written c. 360 BC. The work puts forward speculation on the nature of the physical world and human beings and is followed by the dialogue Critias.

Participants in the dialogue include Socrates, Timaeus of Locri, Hermocrates, and Critias. Some scholars believe that it is not the Critias of the Thirty Tyrants who is appearing in this dialogue, but his grandfather, who is also named Critias.[1][2][3] It has been suggested that Timaeus influenced a book about Pythagoras, written by Philolaus.

The dialogue takes place the day after Socrates described his ideal state. In Plato's works such a discussion occurs in the Republic. Socrates feels that his description of the ideal state wasn't sufficient for the purposes of entertainment and that "I would be glad to hear some account of it engaging in transactions with other states" (19b).

Hermocrates wishes to oblige Socrates and mentions that Critias knows just the account (20b) to do so. Critias proceeds to tell the story of Solon's journey to Egypt where he hears the story of Atlantis, and how Athens used to be an ideal state that subsequently waged war against Atlantis (25a). Critias believes that he is getting ahead of himself, and mentions that Timaeus will tell part of the account from the origin of the universe to man. The history of Atlantis is postponed to Critias. The main content of the dialogue, the exposition by Timaeus, follows.

Nature of the physical world

The speeches about the two worlds are conditioned by the different nature of their objects. Indeed, "a description of what is changeless, fixed and clearly intelligible will be changeless and fixed," (29b), while a description of what changes and is likely, will also change and be just likely. "As being is to becoming, so is truth to belief" (29c). Therefore, in a description of the physical world, one "should not look for anything more than a likely story" (29d).

Timaeus suggests that since nothing "becomes or changes" without cause, then the cause of the universe must be a demiurge or a god, a figure Timaeus refers to as the father and maker of the universe. And since the universe is fair, the demiurge must have looked to the eternal model to make it, and not to the perishable one (29a). Hence, using the eternal and perfect world of "forms" or ideals as a template, he set about creating our world, which formerly only existed in a state of disorder.

Purpose of the universe

Timaeus continues with an explanation of the creation of the universe, which he ascribes to the handiwork of a divine craftsman. The demiurge, being good, wanted there to be as much good as was the world. The demiurge is said to bring order out of substance by imitating an unchanging and eternal model (paradigm). The ananke, often translated as 'necessity', was the only other co-existent element or presence in Plato's cosmogony. Later Platonists clarified that the eternal model existed in the mind of the Demiurge.

(Later in history the term "demiurge" became a term of vilification by Gnostics who purported that the demiurge was a fallen and ignorant god creating a flawed universe, but this was not how Plato was using the term.)

Properties of the universe

Timaeus describes the substance as a lack of homogeneity or balance, in which the four elements (earth, air, fire and water) were shapeless, mixed and in constant motion. Considering that order is favourable over disorder, the essential act of the creator was to bring order and clarity to this substance. Therefore, all the properties of the world are to be explained by the demiurge's choice of what is fair and good; or, the idea of a dichotomy between good and evil.

Then, since the part is imperfect compared to the whole, the world had to be one and only. Therefore, the demiurge did not create several worlds, but a single unique world (31b).

The creator decided also to make the perceptible body of the universe by four elements, in order to render it proportioned. Indeed, in addition to fire and earth, which make bodies visible and solid, a third element was required as a mean: "two things cannot be rightly put together without a third; there must be some bond of union between them". Moreover, since the world is not a surface but a solid, a fourth mean was needed to reach harmony: therefore, the creator placed water and air between fire and earth. "And for these reasons, and out of such elements which are in number four, the body of the world was created, and it was harmonised by proportion" (31-33).

As for the figure, the demiurge created the world in the geometric form of a globe. Indeed, the round figure is the most perfect one, because it comprehends or averages all the other figures and it is the most omnimorphic of all figures: "he [the demiurge] considered that the like is infinitely fairer than the unlike" (33b).

The creator assigned then to the world a rotatory or circular movement, which is the "most appropriate to mind and intelligence" on account of its being the most uniform (34a).

Finally, he created the soul of the world, placed that soul in the center of the world's body and diffused it in every direction. Having thus been created as a perfect, self-sufficient and intelligent being, the world is a god (34b).

The creation of the World Soul

Timaeus then explains how the soul of the world was created (Plato's following discussion is obscure, and almost certainly intended to be read in light of the Sophist). The demiurge combined three elements: two varieties of Sameness (one indivisible and another divisible), two varieties of Difference (again, one indivisible and another divisible), and two types of Being (or Existence, once more, one indivisible and another divisible). From this emerged three compound substances, intermediate (or mixed) Being, intermediate Sameness, and intermediate Difference. From this compound one final substance resulted, the World Soul.[4] He then divided following precise mathematical proportions, cutting the compound lengthways, fixed the resulting two bands in their middle, like in the letter Χ (chi), and connected them at their ends, to have two crossing circles. The demiurge imparted on them a circular movement on their axis: the outer circle was assigned Sameness and turned horizontally to the right, while the inner circle was assigned to Difference and turned diagonally and to the left (34c-36c).

The demiurge gave the primacy to the motion of Sameness and left it undivided; but he divided the motion of Difference in six parts, to have seven unequal circles. He prescribed these circles to move in opposite directions, three of them with equal speeds, the others with unequal speeds, but always in proportion. These circles are the orbits of the heavenly bodies: the three moving at equal speeds are the Sun, Venus and Mercury, while the four moving at unequal speeds are the Moon, Mars, Jupiter and Saturn (36c-d). The complicated pattern of these movements is bound to be repeated again after a period called a 'complete' or 'perfect' year (39d).

Then, the demiurge connected the body and the soul of the universe: he diffused the soul from the center of the body to its extremities in every direction, allowing the invisible soul to envelop the visible body. The soul began to rotate and this was the beginning of its eternal and rational life (36e).

Therefore, having been composed by Sameness, Difference and Existence (their mean), and formed in right proportions, the soul declares the sameness or difference of every object it meets: when it is a sensible object, the inner circle of the Diverse transmit its movement to the soul, where opinions arise, but when it is an intellectual object, the circle of the Same turns perfectly round and true knowledge arises (37a-c).

Timaeus claims that the minute particle of each element had a special geometric shape: tetrahedron (fire), octahedron (air), icosahedron (water), and cube (earth).

The Timaeus makes conjectures on the composition of the four elements which some ancient Greeks thought constituted the physical universe: earth, water, air, and fire. Timaeus links each of these elements to a certain Platonic solid: the element of earth would be a cube, of air an octahedron, of water an icosahedron, and of fire a tetrahedron.[5] Each of these perfect polyhedra would be in turn composed of triangular faces the 30-60-90 and the 45-45-90 triangles. The faces of each element could be broken down into its component right-angled triangles, either isosceles or scalene, which could then be put together to form all of physical matter. Particular characteristics of matter, such as water's capacity to extinguish fire, was then related to shape and size of the constituent triangles. The fifth element (i.e. Platonic solid) was the dodecahedron, whose faces are not triangular, and which was taken to represent the shape of the Universe as a whole, possibly because of all the elements it most approximates a sphere, which Timaeus has already noted was the shape into which God had formed the Universe.

The extensive final part of the dialogue addresses the creation of humans, including the soul, anatomy, perception, and transmigration of the soul.

According to Mary Ritter Beard, Theano, the wife of Pythagoras told Hippodamus of Thurium (may be Hippodamus of Miletus, who according to Aristotle planned the city of Thurium in 440 BC),[6] the treatise On Virtue, she wrote, contains the doctrine of the golden mean.[7]

"For whenever in any three numbers, whether cube or square, there is a mean, which is to the last term what the first term is to it; and again, when the mean is to the first term as the last term is to the mean—then the mean becoming first and last, and the first and last both becoming means, they will all of them of necessity come to be the same, and having become the same with one another will be all one" (31c-32a); thereby he implies the aesthetically perfect proportion known as golden ratio or golden mean.[citation needed] 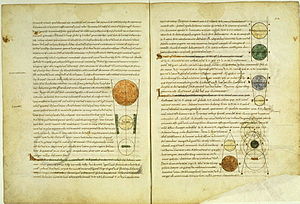 The Timaeus was translated into Latin by Cicero,[8] and the first part (to 53c) was again translated by Calcidius c. 321 AD. Calcidius' partial translation of the Timaeus was the only Platonic dialogue, and one of the few works of classical natural philosophy, available to Latin readers in the early Middle Ages. Thus it had a strong influence on medieval Neoplatonic cosmology and was commented on particularly by 12th century Christian philosophers of the Chartres School, such as Thierry of Chartres and William of Conches, who interpreting it in the light of the Christian faith understood the dialogue to refer to a creatio ex nihilo.[9]