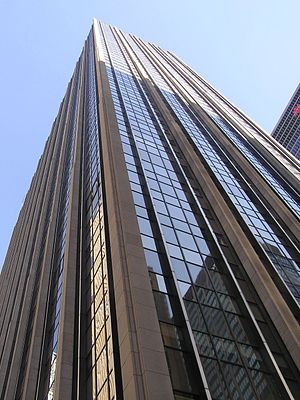 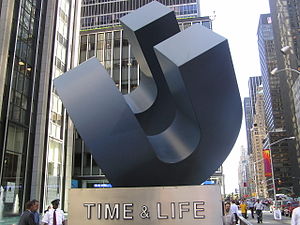 Time-Life statue in New York City, in front of the Time-Life building

Direct Holdings Global LLC, doing business as StarVista Entertainment and Time Life is a creator and direct marketer that is known for selling books, music, video/DVD, and multimedia products. The current focus of the company is music, video and entertainment experiences (such as cruises) as the book division closed in 2003. Its products have been sold throughout North America, Europe, Australia, and Asia through television, print, retail, the Internet, telemarketing, and direct sales. Current operations are focused in the US and Canada with limited retail distribution overseas.

Time Life was founded in 1961 as the book division of Time Inc.. It took its name from Time Inc.'s cornerstone magazines, Time and Life, but remained independent of both. During 1966, Time Life combined its book offerings with music collections (two to five records) and packaged them as a sturdy box set. Throughout the 1970s and 1980s, the selection of books, music and videos grew and was diversified into more genres. When record labels stopped producing vinyl albums in 1990, Time Life switched to CD only. In the mid-1990s, Time Life acquired Heartland Music, with the Heartland Music label now appearing as a brand. This company was subsequently sold off and is no longer attached to Time Life.

At the end of 2003 Time Life was acquired by Ripplewood Holdings L.L.C. and ZelnickMedia Corporation to become part of Direct Holdings Worldwide L.L.C. Direct Holdings Americas Inc. operates as a leader in the sale of music and video products under the Time Life brand. Since 2003, Direct Holdings US Corp is the legal name of Time Life, and is no longer owned by its former parent Time Warner, later Time Inc. in June 9, 2014. In March 2007, Ripplewood led a group that took The Reader's Digest Association private and treated Time Life as a division of RDA. By 2003 onward, a disclaimer on the copyright stated that it is "not affiliated with Time Warner Inc. or Time Inc.", who owns the Time and Life magazines which this company name came from.

The Time Life company was founded by Jean, Incorporated in 1961, as a book marketing division. It takes its name from Time and Life magazines, two of the most popular weeklies of the era. It was based in the Time Life building in Rockefeller Center.

Time Life gained fame as a seller of book series that would be mailed to households in monthly installments, operating as book sales clubs. Several of these book series garnered substantial critical acclaim unusual for a mass-market mail order house.[citation needed] For example, the series Library of Photography of the early-1970s featured very high-quality duotone printing for its black-and-white reproductions in its original edition, and was of course able to draw on Life Magazine's vast archive of journalistic and art photographs from virtually every major photographer; Foods Of The World featured contributions by M.F.K. Fisher, James Beard, Julia Child, Craig Claiborne and many others; and The Good Cook series, edited by Richard Olney, featured contributions from Jeremiah Tower, Jane Grigson, Michel Lemonnier and many others. Other series of high regard covered nature and the sciences, as well as the history of world civilizations. The science books are interesting as ephemera of their time. The content of these series was more or less encyclopedic, providing the basics of the subjects in the way it might be done in a lecture aimed at the general public. There was also a series on contemporary life in various countries of the world. Some other series are much less highly regarded, especially the later output as the publisher moved away from soberly presented science and history towards sensationalism, pop-history, and DIY-themed books. The books, whatever their quality, are easy to find at low prices on the used-book market, due to their being published in the millions of copies. (Some of the items in this list may also be single books not in a series, but followed the same types of themes as the book series.)

Time Life added music in 1962, selling box sets and collections through Time–Life Records. During the 1960s and 1970s, the collections released by Time–Life Records catered to a conservative adult audience, with genres including classical, jazz, swing and orchestral music; and the music of operas and Broadway theatre. On occasion, Time Life offered popular music (generally pre-1955 music, as opposed to pop and rock music airing on contemporary hit radio stations in the United States at the time) in box sets. Although there were television advertisements, Time Life advertised most of these sets in magazines, specialty catalogs and direct mail.

In the early 1980s, Time Life began branching out, offering a series of albums focusing on country music. The first series was 1981's "Country Music," with volumes focusing on a particular artist and featuring eight or nine tracks per album. Twenty volumes were issued, with many of country's greatest artists of the time (Charley Pride was the first artist featured) getting their own album. But until the mid-1980s, Time–Life did not feature a rock music-intensive series for customers, preferring to cater to older adults with conservative music tastes.

Time Life's first successful foray into rock music came in 1986, with a series called "The Rock 'n' Roll Era." Each volume in that series—like similar series that followed—focused on a particular year (in this case, 1955 through 1964—the early, pre-Beatles years of rock music), a stylistic trend or particular artist influential in rock music. Each volume had 22 tracks, and was said to contain the original hit recording by the original artist (although this wasn't always true on early pressings of the early albums in the series). The songs themselves represented the most important and popular songs from the period or subject featured. An essay published by Both Sides Now Publications noted that Time-Life's move into rock music came at a time when much of the adult audience Time-Life catered to grew up during the rock-and-roll era and, as such, the new series was consistent with its goal of catering to an adult audience.[4]

"The Rock 'n' Roll Era" series was a big success, and by the time the final volume was issued in the early 1990s, more than 50 different volumes (including two Christmas albums) had been released. This paved the way for more country and pop music-intensive series, including "Country USA," "Classic Rock," "Sounds of the Seventies," "Sounds of the Eighties," "Your Hit Parade" (a series featuring popular music of the 1940s through early 1960s) and "Super Hits." Like the earlier series, each volume issued had its own paperback booklet containing liner notes and information about the songs, with the addition of placement on various Billboard magazine charts.

Like the earlier box sets featuring other musical styles and genres, the country and pop music series were advertised in magazines, catalogs and direct mail. By this time, some of these collections were advertised on television: either commercials or 30-minute infomercials. The television advertisements used slogans (e.g., "Relive your high school days ..."), clips of songs included in each volume (along with a scrolling list of other titles), a commercial spokesman (usually a performer or legendary disc jockey relevant to a given series, such as Rick Dees for a 1970s-intensive collection and Ralph Emery for a country music series) and testimonials from customers attesting to the quality and value of the albums, to pitch a given series. Key selling points of these collections are that each track was digitally transferred to the desired format using the original master recordings, as opposed to being "re-records"; and that the most popular and requested songs by customers could be found in a single collection (as opposed to a customer having to purchase many albums to obtain just a few desired tracks).

Customers were given a choice of which format they wanted their box set: either vinyl albums (through 1990), 8-track or cassette tape, or compact disc; today's box sets are offered only as compact discs.

While most of Time Life's box sets and releases were critically hailed, there were also some minor faults pointed out by critics. For instance, several early pressings of the early volumes in "The Rock'n'Roll Era" series contained stereo re-recordings of the original hits (something that would be corrected on later pressings, either with the correct original recording or a replacement track). Sometimes, the most popular songs of a given time period were omitted, frequently due to licensing issues. Examples included The Beatles and The Rolling Stones for the Classic Rock and "Super Hits"/"AM Gold" series; and Prince, Madonna, Whitney Houston and Michael Jackson on the main Sounds of the Eighties series.

Through 2010, several different series Time Life had offered were available on a subscription basis, either by calling a 1-800 number or sending a completed postcard-sized card and payment to Time–Life. Purportedly, the customer would get a specific volume (as advertised on TV or in a magazine) first, before receiving a new volume roughly every other month (on the format of their choice); customers and had the option of keeping just the volumes they wanted. In time, each volume was also offered for individual sale.

Several of the series – especially the pop, rock, country and rhythm and blues series – had retail versions for sale, released after the entire series was issued. Typically, these were sold at discount stores, often grouped in three-CD sets of 12 tracks each and having the most popular of the series' tracks, and cover artwork and naming loosely based off the subscription/catalog-exclusive titles. Additionally, the "Classic Country" series had special 15-track single-CD versions of several of its volumes issued for retail sale (in addition to budget 3-CD sets).

The following list shows many of the collections the company has released, but is by no means exhaustive.

Time Life's video business has been growing quickly since 2000. Starting with documentaries including Growing Up Wild and the re-release of World at War, the company has more recently branched into nostalgic television shows. Time Life is able to leverage their music industry knowledge and contacts to release television shows previously held back because of expensive music rights clearances. Their collections are known for having extensive bonus features, liner notes and packaging. Television show releases from Time Life include: