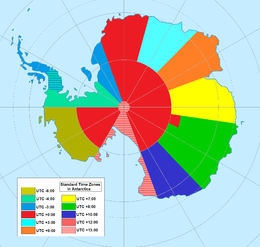 Map of time zones on the continent of Antarctica. It is an approximation. Stations can use time zones not matching the map.

Antarctica sits on every line of longitude, due to the South Pole being situated near the middle of the continent. Theoretically Antarctica would be located in all time zones; however, areas south of the Antarctic Circle experience extreme day-night cycles near the times of the June and December solstices, making it difficult to determine which time zone would be appropriate. For practical purposes time zones are usually based on territorial claims; however, many stations use the time of the country they are owned by or the time zone of their supply base (e.g. McMurdo Station and Amundsen–Scott South Pole Station use New Zealand time due to their main supply base being Christchurch, New Zealand).[1] Nearby stations can have different time zones, due to their belonging to different countries. Many areas have no time zone since nothing is decided and there are not even any temporary settlements that have any clocks. They are simply labeled with UTC time.[2]

The coordinates are latitude and longitude, and for each there are 2 or 3 digits for degrees, 2 digits for minutes and for some 2 digits for seconds. 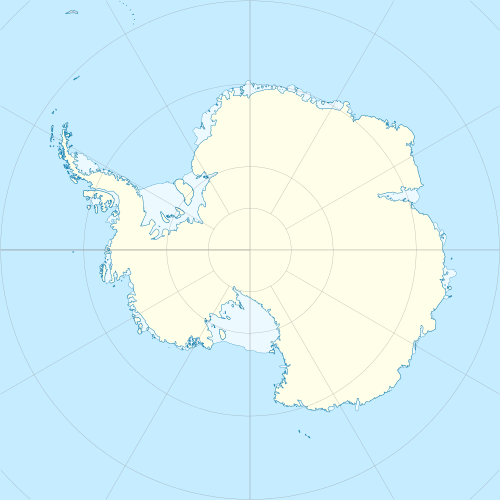 Troll (0)
Locations of the reference bases

For the most part, daylight saving time (DST) is not observed in Antarctica because 95 percent of the continent is located south of the Antarctic Circle and the midnight sun phenomenon renders the use of DST unnecessary, and it would further complicate communication with the claimant countries in the northern hemisphere.

However, a few regions such as the Ross Dependency and Palmer Land observe the time and use of DST of the countries they are supplied from, Chile and New Zealand.[1] The areas have DST during the southern summer, when there is the northern winter, including January.