Time in the United States

Time in the United States, by law, is divided into nine standard time zones covering the states and its possessions, with most of the United States observing daylight saving time for approximately the spring, summer, and fall months. The time zone boundaries and DST observance are regulated by the Department of Transportation. Official and highly precise timekeeping services (clocks) are provided by two federal agencies: the National Institute of Standards and Technology (NIST) (an agency of the Department of Commerce); and its military counterpart, the United States Naval Observatory (USNO). The clocks run by these services are kept synchronized with each other as well as with those of other international timekeeping organizations.

It is the combination of the time zone and daylight saving rules, along with the timekeeping services, which determines the legal civil time for any U.S. location at any moment. 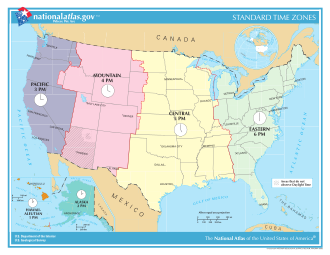 Map of U.S. time zones between April 2, 2006, and March 11, 2007. The current situation is different only in that several Indiana counties are now in the Eastern Time Zone instead of the Central Time Zone.

Standard time zones in the United States are currently defined at the federal level by law 15 USC §260.[1] The federal law also establishes the transition dates and times at which daylight saving time occurs, if observed. It is ultimately the authority of the Secretary of Transportation, in coordination with the states, to determine which regions will observe which of the standard time zones and if they will observe daylight saving time.[2] As of August 9, 2007, the standard time zones are defined in terms of hourly offsets from UTC.[3] Prior to this they were based upon the mean solar time at several meridians 15° apart west of Greenwich (GMT).

Only the full-time zone names listed below are official; abbreviations are by common use conventions, and duplicated elsewhere in the world for different time zones.

The United States uses nine standard time zones. As defined by US law[4] they are:

Zones used in the contiguous U.S.

From east to west, the times zones of the contiguous United States are:

Zones used in states beyond the contiguous U.S.

Zones outside the states

Some United States Minor Outlying Islands are outside the time zones defined by 15 U.S.C. §260 and exist in waters defined by Nautical time. In practice, military crews may simply use Zulu time (UTC±0) when on these islands. Baker Island and Howland Island are in UTC−12, while Wake Island is in UTC+12. Because they exist on opposite sides of the International Date Line, it can, for example, be noon Thursday on Baker and Howland islands while simultaneously being noon Friday on Wake Island. Other outlying islands include Jarvis Island, Midway Atoll, Palmyra Atoll, and Kingman Reef (UTC−11); Johnston Atoll (UTC−10); and Navassa Island, Bajo Nuevo Bank, and Serranilla Bank (UTC−05).

In Antarctica, the US research facility Palmer Station is in UTC−04, while McMurdo Station and Amundsen–Scott South Pole Station use UTC+12 in order to coordinate with their main supply base in New Zealand.

Boundaries between the zones

(Described from north to south along each boundary.) 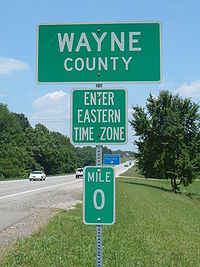 Marker showing the border of Wayne County, Kentucky, and the Eastern Time Zone 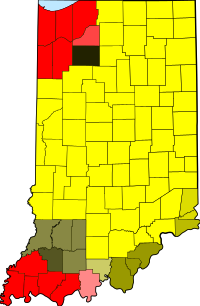 The Energy Policy Act of 2005 extended daylight saving time (DST) for an additional month beginning in 2007. The start of DST now occurs on the second Sunday in March and ends on the first Sunday in November.

In response to the Uniform Time Act of 1966, each state of the US has officially chosen to apply one of two rules over its entire territory:

The Eastern Time Zone is commonly used by the national media and other organizations as somewhat of a de facto national time for all of the United States. National media organizations will often report when news events happened or are scheduled to happen in Eastern Time, even if they occurred in another time zone. TV schedules, especially those that list events that are broadcast live across the country, are also almost always posted in Eastern Time. The major professional sports leagues also post all game times in Eastern time; thus, for example, the start time of a Los Angeles Dodgers–San Francisco Giants game usually is still posted by Major League Baseball and the national sports media in Eastern Time, even though the game location is covered by the Pacific Time Zone. Thus a first pitch time of 7:10 pm Pacific time would read as 10:10 pm for national purposes.

However, the United States currently does not use any sort of national railway time like the railways in Russia; airports, railway stations, and other modes of transportation follow the local time.

Broadcast times used in the U.S.

With four time zones in the contiguous United States, U.S. national broadcast networks and cable channels generally air at least two separate feeds to their stations and affiliates: the "east feed" that is aired simultaneously in the Eastern and Central Time Zones, and the "west feed" that is tape-delayed three hours for those in the Pacific Time Zone. This ensures that a program, for example, that airs at 8 p.m. on the east coast is also shown locally at 8 p.m. on the Pacific. Networks may also air a third feed specifically for the Mountain Time Zone, which usually airs on a one-hour delay from the east feed; otherwise those in the Mountain Time Zone get the west feed. These networks and cable channels advertise airtimes in Eastern time, sometimes also including either Central or Pacific time and until the 1980s, Mountain time, depending on whether there is a separate feed for that time zone. This has led to conventions like "tonight at 9 p.m. Eastern/8 p.m. Central", "tonight at 9/8 Central" or "tonight at 9/8c" (referring to the east feed); "tonight at 9 p.m. Eastern and Pacific" (referring to both the east feed and the three-hour delayed west feed); and "tonight at 9/8 Central and Mountain" (also including the Mountain feed). A few cable channels may not audibly refer to the Central time airtime of a program, though their promos may also visually include references to its broadcast in both the Eastern and Central time zones. So when a viewer only hears "tonight at 8," regardless of whether the promo visually includes it or not, chances are that the show they are referring to is scheduled to air at 7 p.m. in the Central time zone.

Live events that are simulcast across the country may be either advertised in Eastern time only, or in both Eastern and Pacific (e.g. "8 p.m. Eastern/5 p.m. Pacific")

Time changes for daylight saving time may result in broadcast television stations and cable channels accommodating the time changes by altering their schedules to allow programs to continue to air at the same time year-round. Thus, advertised airtimes normally never specify if it is standard time or DST.

Network programming in Alaska and Hawaii generally follows a schedule similar to that of Central Time Zone, although primetime shows are delayed by an additional hour during DST.

There have been numerous mentions of time zones in films, TV shows, and books, including the following: