From Infogalactic: the planetary knowledge core
Jump to: navigation, search
For the 20th-century periods of conflict in Northern Ireland, see The Troubles. For the books by Harry Turtledove, see Videssos. For the Dungeons & Dragons plotline, see Time of Troubles (Forgotten Realms). 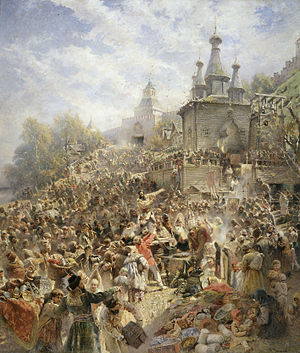 The Time of Troubles (Russian: Смутное время) was a period of Russian history comprising the years of interregnum between the death of the last Russian Tsar of the Rurik Dynasty, Feodor Ivanovich, in 1598, and the establishment of the Romanov Dynasty in 1613. In 1601–03, Russia suffered a famine that killed one-third of the population, about two million. At the time, during the Polish–Muscovite War (1605–18) (known as the Dimitriads), Russia was occupied by the Polish–Lithuanian Commonwealth, and suffered from civil uprisings, usurpers and impostors.

After Feodor's death, his brother-in-law and closest adviser, boyar Boris Godunov, who had already acted as regent for the mentally-challenged Feodor, was elected his successor by a Great National Assembly (Zemsky Sobor). Godunov's short reign (1598–1605) was not as successful as his administration under the weak Feodor.

Extremely poor harvests were encountered in 1601–03, with night time temperatures in all summer months often below freezing, wrecking crops; see Russian famine of 1601–03.[1] The probable cause of climatic changes was the eruption of Huaynaputina volcano in Peru in 1600.[2][3][4] Widespread hunger led to mass starvation; the government distributed money and food for poor people in Moscow, but that only led to refugees' flocking to the capital and increasing the economic disorganization. The oligarchical faction, headed by the Romanovs, considered it a disgrace to obey a boyar; conspiracies were frequent; the rural districts were desolated by famine and plague; large bands of armed brigands roamed the country committing all manner of atrocities; the Don Cossacks on the frontier were restless; and the government demonstrated it could not keep order.

Under the influence of the great nobles who had unsuccessfully opposed the election of Godunov, the general discontent was expressed as hostility to him as a usurper. Rumours circulated that the late tsar's younger brother Dmitri, thought to be dead, was still alive and in hiding.

In 1603 a man calling himself Dmitri—first of the so-called False Dmitris—and professing to be the rightful heir to the throne, appeared in the Polish–Lithuanian Commonwealth. Dmitri had been stabbed to death before his brother Feodor's death, allegedly by Godunov's order; but the mysterious individual who was impersonating him was regarded as the rightful heir by many of the population. He attracted support both in Russia and outside its borders, particularly in the Polish Commonwealth and the Papal States. Factions in the Polish Commonwealth saw him as a tool to extend their influence over Russia, or at least gain wealth in return for their support; the Papacy saw it as an opportunity to increase the hold of Roman Catholicism over the Eastern Orthodox Russians. 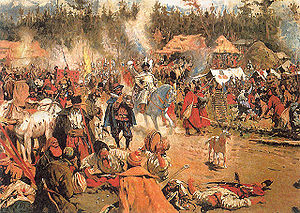 In the Time of Troubles by Sergey Ivanov.

A few months later in 1603, Polish forces crossed the frontier with a small force of 4,000 Poles, Lithuanians, Russian exiles, German mercenaries and Cossacks from the Dnieper and the Don, in what marked the beginning of the Polish Commonwealth's intervention in Russia, or the Dymitriad wars. Although the Polish Commonwealth had not officially declared war on Russia (Sigismund III Vasa quietly supported the intervention, but the Commonwealth was too preoccupied with its conflicts with Sweden and Turkey to start another war with Russia), some powerful magnates decided to support False Dmitri with their own forces and money, in the expectation of rich rewards afterward. False Dmitri was married per procura to Marina Mniszech, and immediately after Godunov's death in 1605, he made his triumphal entry into Moscow.

The reign of False Dimitri was short. Before a year had passed, Vasily Shuisky, an ambitious Rurikid prince (knyaz), formed a conspiracy against him. His forces murdered False Dimitri soon after his marriage in the Moscow Kremlin, together with many of his supporters, who were brutally massacred.[5] Shuisky and his men were estimated to have killed 2,000 Poles. The reaction to the massacre in Poland was strong, but the government decided to postpone revenge against those responsible.[6]

Shuisky seized power and was elected tsar by an assembly composed of his faction, but the change did not satisfy the Russian boyars, Commonwealth magnates, Cossacks, or the German mercenaries, and soon a new impostor, likewise calling himself Dmitri, son and heir of Ivan the Terrible, came forward as the rightful heir. Like his predecessor, he enjoyed the protection and support of the Polish–Lithuanian magnates. After Shuisky signed an alliance with Sweden, the king of the Commonwealth, Sigismund III, seeing the Russian–Swedish alliance as a threat, resolved to intervene and began the Polish–Muscovite War (1605–18). 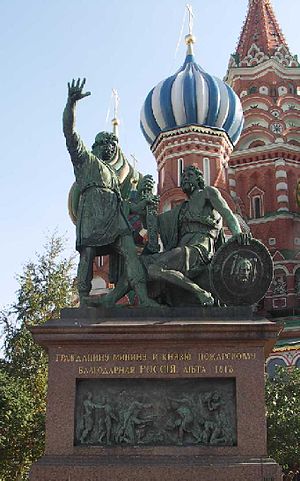 Polish–Lithuanian troops crossed the Russian borders and laid siege to the fortress of Smolensk. After the combined Russo–Swedish forces were destroyed at the Battle of Klushino, Shuisky was forced to abdicate. Before False Dmitri II could gain the throne, the Polish commander, voivode, and magnate Stanisław Żółkiewski, put forward a rival candidate: Sigismund's son, Władysław. Some people in Moscow swore allegiance to him on condition of his maintaining Orthodoxy and granting certain privileges to them. On this understanding, they allowed Polish troops to enter the city and occupy the Kremlin.

The Polish king opposed the compromise, deciding to take the throne for himself and to convert Russia to Roman Catholicism. The contending factions were opposed and his plan aroused the anti-Catholic and anti-Polish feelings in Russia. The Swedes disapproved as they were rivals of the Poles on the Baltic coast. They declared war on Russia, supporting a false Dmitri of their choice in Ivangorod.

Russia was in a critical condition. The throne was vacant; the great nobles (boyars) quarrelled among themselves; Orthodox Patriarch Hermogenes was imprisoned; Catholic Poles occupied the Moscow Kremlin and Smolensk; the Protestant Swedes occupied Novgorod; continuing Tatar raids left the south borderlands of Russia completely depopulated and devastated;[7] and enormous bands of brigands swarmed everywhere. Tens of thousands died in battles and riots; on 17–19 March 1611, the Poles and German mercenaries suppressed riots in Moscow; they massacred 7,000 Muscovites and set the city on fire.[8] Many other cities were also devastated or weakened. For example, on 22 September 1612, the Poles and Lithuanians exterminated the population and clergy of Vologda.[8]

The nation rose together under the leadership of Kuzma Minin, a Nizhny Novgorod merchant, and Prince Pozharsky. After the battle for Moscow on 22 October 1612 Old Style[8] (1 November New Style), the invaders retreated to the Kremlin, and on 24–27 October O.S.[9] (3–6 November N.S.) the nearby Polish army was forced to retreat. The garrison in the Kremlin surrendered to the triumphant Pozharsky. The festival of National Unity Day commemorating this event on November 4 was held annually until the rise of communism, when it was replaced by celebrations for the October Revolution. National Unity Day was reinstated by President Putin in 2005, though few Russians now understand its significance or even know the name of the holiday.

A Grand National Assembly elected as tsar Michael Romanov, the young son of the metropolitan Philaret. He was connected by marriage with the late dynasty and, according to the legend, had been saved from the enemies by a heroic peasant, Ivan Susanin. After taking power, the new Tsar ordered the 3-year-old son of the False Dmitri II to be hanged, and had Dmitri's wife Maryna strangled.

The Ingrian Wars against Sweden lasted until the Treaty of Stolbovo in 1617. Russia's Dymitriad wars against the Commonwealth would last until the Peace of Deulino in 1619. While gaining peace through the treaties, both nations forced Russia to make some territorial concessions, though they lost the majority of them over the coming centuries. Most importantly, the crisis was instrumental in unifying all classes of the Russian society around the Romanov tsars and established foundations for the powerful Russian Empire. 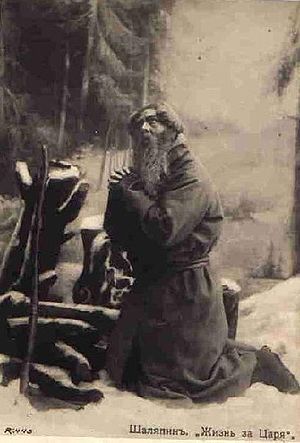 This period of the "Time of Troubles" has inspired many artists and playwrights in Russia and beyond. The three most popular topics are the Pozharsky/Minin liberation of Moscow, the struggle between Boris Godunov and False Dmitry, and the story of Ivan Susanin, a peasant who was said to sacrifice himself to lead Poles away from Mikhail Romanov.

Russian and Polish artists have painted numerous works based on these events.

Numerous histories have been written, as well. In 2001, Chester Dunning, a specialist in Russian history at Texas A&M University published the nearly 700-page Russia's First Civil War: The Time of Troubles and the Founding of the Romanov Dynasty. Twelve years in the research and writing, his work was a History Book Club selection published by the Pennsylvania State University Press. Dunning's thesis is that modern Russia begins in 1613 with the founding of the Romanov dynasty. He covers the Time of Troubles and their contribution to the founding.[10]