From Infogalactic: the planetary knowledge core
Jump to: navigation, search
For other uses, see Timeline (disambiguation). 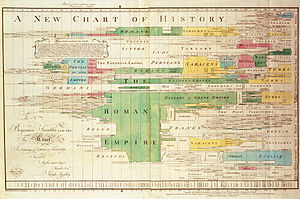 ChronoZoom is an example of interactive, zoomable timeline software. 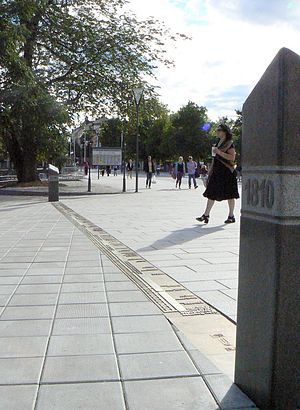 The bronze timeline "Fifteen meters of History" with background information board, Örebro, Sweden.

A timeline is a way of displaying a list of events in chronological order, sometimes described as a project artifact.[1] It is typically a graphic design showing a long bar labelled with dates alongside itself and usually events labelled on points where they would have happened.

A timeline is a way of displaying a list of events in chronological order, sometimes described as a project artifact. Timelines can use any time scale, depending on the subject and data. Most timelines use a linear scale, where a unit of distance is equal to a set amount of time. This time scale is dependent on the events in the timeline. A timeline of evolution can be over millions of years, whereas a timeline for the day of the September 11 attacks can take place over minutes. While most timelines use a linear timescale, for very large or small timespans, logarithmic timelines use a logarithmic scale to depict time.

There are different types of timelines

There are many methods of visualizations for timelines. Historically, timelines were static images, and generally drawn or printed on paper. Timelines relied heavily on graphic design, and the ability of the artist to visualize the data.

Timelines, no longer constrained by previous space and functional limitations, are now digital and interactive, generally created with computer software. ChronoZoom is an example of computer aided interactive timeline software.

Timelines are often used in education to help students and researchers with understanding the order or chronology of historical events and trends for a subject. When showing time on a specific scale on an axis, a timeline can be used to visualize time lapses between events, durations (such as a lifetimes or wars), and the simultaneity or overlap of spans and events.

Timelines are particularly useful for studying history, as they convey a sense of change over time. Wars and social movements are often shown as timelines. Timelines are also useful for biographies. Examples include:

Timelines are also used in the natural world and sciences, for subjects such as astronomy, biology, and geology:

Another type of timeline is used for project management. In these cases, timelines are used to help team members to know what milestones need to be achieved and under what time schedule. For example, in the case of establishing a project timeline in the implementation phase of the life cycle of a computer system.