Timgad (called Thamugas or Thamugadi in old Berber) was a Roman colonial town in the Aurès Mountains of Algeria, founded by the Emperor Trajan around AD 100. The full name of the town was Colonia Marciana Ulpia Traiana Thamugadi. Trajan commemorated the city after his mother Marcia, eldest sister Ulpia Marciana, and father Marcus Ulpius Traianus.

Located in modern-day Algeria, about 35 km east of the town of Batna, the ruins are noteworthy for representing one of the best extant examples of the grid plan as used in Roman city planning.

The city was founded ex nihilo as a military colony by the emperor Trajan around AD 100. It was intended to serve primarily as a bastion against the Berbers in the nearby Aures Mountains. It was originally populated largely by Roman veterans of the Parthian campaigns who were granted lands in return for years of service.

The city enjoyed a peaceful existence for the first several hundred years and became a center of Christian activity starting in the 3rd century, and a Donatist center in the 4th century.

In the 5th century, the city was sacked by the Vandals before falling into decline. In AD 535 the Byzantine general Solomon found the city empty when he came to occupy it. In the following century, the city was briefly repopulated as a primarily Christian city before being sacked by Berbers in the 5th century. During the Christian period, Timgad was a bishopric which became renowned at the end of the 4th century when Bishop Optat became the spokesman for the Donatist heresy. The city saw a revival of activity after the Byzantine reconquest in the 6th century, but the Arab invasion brought about the destruction of Thamugadi, where occupation ceased definitively after the 8th century.[1]

Because no new settlements were founded on the site after the 7th century, the town was partially preserved under sand up to a depth of approximately one meter. The encroachment of the Sahara on the ruins was the principal reason why the town is so well preserved.

After the Arab sacking in the 8th century the city disappeared from history until its excavation in 1881. 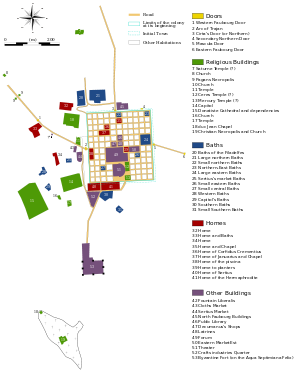 Map of the Archeological site

Located at the intersection of six roads, the city was walled but not fortified. Originally designed for a population of around 15,000, the city quickly outgrew its original specifications and spilled beyond the orthogonal grid in a more loosely organized fashion.

At the time of its founding, the area surrounding the city was a fertile agricultural area, about 1000 meters above sea level.

The original Roman grid plan is magnificently visible in the orthogonal design, highlighted by the decumanus maximus (east–west-oriented street) and the cardo (north–south-oriented street) lined by a partially restored Corinthian colonnade. The cardo does not proceed completely through the town but instead terminates in a forum at the intersection with the decumanus.

At the west end of the decumanus rises a 12 m high triumphal arch, called the Arch of Trajan, which was partially restored in 1900. The arch is principally of sandstone, and is of the Corinthian order with three arches, the central one being 11' wide. The arch is also known as the Timgad Arch.

A 3,500-seat theater is in good condition and is used for contemporary productions. The other key buildings include four thermae, a library, and a basilica.

The Capitoline Temple is dedicated to Jupiter and is of approximately the same dimensions as the Pantheon in Rome. Nearby the capitol is a square church with a circular apse dating from the 7th century AD. Southeast of the city is a large Byzantine citadel built in the later days of the city.

The Library at Timgad was a gift to the Roman people by Julius Quintianus Flavius Rogatianus at a cost of 400,000 sesterces.[2] As no additional information about this benefactor has been unearthed, the precise date of the library's construction remains uncertain. Based on the remaining archaeological evidence, it has been suggested by scholars that it dates from the late 3rd or possibly the 4thcentury.[2] The library occupies a rectangle 81 feet (24.69 meters) long by 77 feet (23.47 meters) wide.[2] It consists of a large semi-circular room flanked by two secondary rectangular rooms, and preceded by a U-shaped colonnaded portico surrounding three sides on an open court.[2] The portico is flanked by two long narrow rooms on each side, and the large vaulted hall would have combined the functions of a reading room, stack room, and perhaps a lecture room.[2] Oblong alcoves held wooden shelves along walls that would likely have been complete with sides, backs, and doors, based on additional evidence found at the library at Ephesus.[2] It is possible that free-standing bookcases in the center of the room, as well as a reading desk, might also have been present.[2] While the architecture of the Library at Timgad is not especially remarkable, the discovery of the library is historically important as it shows the presence of a fully developed library system in this Roman city, indicating a high standard of learning and culture. While there is no evidence as to the size of the collection the library harbored, it is estimated that it could have accommodated 3,000 scrolls.[2]

Timgad was inscribed as a World Heritage Site by UNESCO in 1982.