Timothy David Snyder (born August 18, 1969)[2] is an American historian, author, and academic specializing in the history of Central and Eastern Europe, and the Holocaust. He is a professor at Yale University and is affiliated with the Institute for Human Sciences in Vienna[3] and the College of Europe in Natolin, Poland. Snyder is a member of the Council on Foreign Relations.

Born in southwestern Ohio, Snyder graduated from Centerville High School, 10 miles (16 kilometers) south of Dayton, where his father, a physician, and his mother reside. He received his BA from Brown University and his doctorate in 1997 from the University of Oxford, where he was a Marshall Scholar.[4] He has held fellowships in Paris, Vienna, Warsaw, and as an Academy Scholar at Harvard University. Since 2005, Snyder has been married to Marci Shore, a professor of European cultural and intellectual history at Yale University. Snyder and Shore have two children together.[5]

Snyder has written five books and co-edited two. One of them, Thinking the Twentieth Century (2012), with the late historian Tony Judt, was written while the latter was dying of ALS disease.

Snyder has published essays in publications such as the International Herald Tribune, The Nation, New York Review of Books, the Times Literary Supplement, The New Republic, Eurozine, Tygodnik Powszechny, the Chicago Tribune, and the Christian Science Monitor. 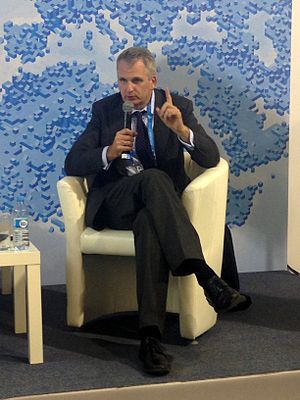 Snyder says that he has a reading and/or speaking knowledge of 11 European languages. This enabled him to make good use of primary and archival sources in Germany and Central Europe in researching his book, Bloodlands: Europe Between Hitler and Stalin, which was published in 2010 to considerable acclaim. Reviewer Igor Lukes noted:

"A word about sources. Snyder introduces his Bibliography with an impressive list of seventeen archival collections located in six countries. Yet a closer look at the text and endnotes reveals that evidence drawn from archives represents but a small fraction of this book's evidentiary apparatus. This is a project built on secondary sources. The point is that many of Snyder's secondary sources are of the kind that even many specialists are unlikely to have seen, which is hardly surprising because Snyder can do research in ten languages, some pretty exotic. Bloodlands takes nuggets from each source, then assembles them into an original mosaic. Almost every paragraph of the book's eleven chapters is supported by one or several previously underutilized secondary sources."[6]

Snyder says that knowing other languages is very important:

"If you don't know Russian, you don't really know what you're missing. ... We can only see as much, and we can only go as far as our languages take us. I wrote this book in English, but there are very important conversations that are happening in German, Russian, Polish and so on among those historians, and the book is addressed to all of them."[7]

Bloodlands has been translated into 20 languages.[8]

Snyder is a member of the Committee on Conscience of the United States Holocaust Memorial Museum and is on the editorial boards of the Journal of Modern European History and East European Politics and Societies.[8]

For the academic year 2013–2014, he held the Philippe Roman Chair of International History at the London School of Economics and Political Science.[9]

Professor Snyder teaches a popular two-part lecture course at Yale covering the history of Eastern Europe pre- and post-1914, a critical turning point in world affairs. In the past he has also taught an undergraduate seminar on communism in Eastern Europe.[13]