Timothy Davies was born in Llanpumsaint, Carmarthenshire where he spent his childhood years until later moving to Liverpool to become an apprentice in the textile industry.[2] In 1885, he founded his own company in Fulham, London but maintained strong links with Wales as evidenced when he commissioned a stone fountain for Carmarthen Park in 1899.[2]

He was a supporter of the Temperance movement.[4] For many years he had a close friendship with David Lloyd George.[5] In 1906 he completed his hat-trick of Fulham representation when he gained the parliamentary seat at the General Election; 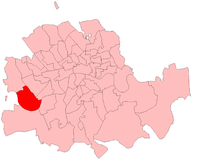 Fulham in the Metropolitan area, showing boundaries used from 1885 to 1918.

In 1910, rather than seek re-election at Fulham, he switched constituencies to contest Louth in Lincolnshire;

Despite failure, he fought the seat again 11 months later;

In 1912 he voted against and in 1917 he voted in favour of giving votes to women. In 1916 he supported the introduction of Conscription. In 1918, he was absent during the key Maurice debate.[6] He sought re-election at the 1918 election but found that the Coalition 'coupon' had been issued to his Unionist opponent;

Davies did not stand for Parliament again.

As well as serving as a MP Timothy Davies also became a Justice of the Peace and an Income Tax Commissioner. He died in 1951, aged 94.