The Timucuan Ecological and Historic Preserve is a U.S. National Preserve in Jacksonville, Florida. It comprises 46,000 acres (19,000 ha) of wetlands, waterways, and other habitats in northeastern Duval County. Managed by the National Park Service in cooperation with the City of Jacksonville and Florida State Parks, it includes natural and historic areas such as the Fort Caroline National Memorial and the Kingsley Plantation. 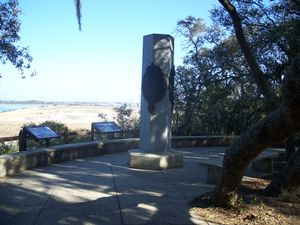 Ribault monument, in the Preserve, with the St. Johns River in the background

The Fort Caroline National Memorial is located in the Timucuan Preserve, as is the Kingsley Plantation, the oldest standing plantation in the state. The Preserve is maintained through cooperation by the National Park Service, the Florida Department of Environmental Protection and the City of Jacksonville Department of Parks and Recreation. It is named for the Timucua Indians who had 35 chiefdoms throughout northern Florida and south Georgia at the time of Spanish colonization.

Archeological excavation by a University of North Florida team has revealed more information about indigenous peoples in the area. On Black Hammock Island, they have discovered remnants of the second-oldest pottery in the United States, dating to 2500 BCE. (There have been slightly older finds in the Savannah River area.)[4]

They also have excavated more recent artifacts contemporary with the Mocama chiefdom. In the last 25 years, these Native American people have been recognized as distinct from the Timucua, although they spoke a Timucuan dialect. Their chiefdom extended from the St. Johns River to St. Simons Island, Georgia.[4]

Archeologists believe they have found evidence of a Spanish mission on the island as well.[4] San Juan del Puerto, one of the oldest Spanish missions in Florida, was established here during the 16th century. Franciscan brothers were missionaries to the Timucua and Guale Indians along the coast, whose territory included the Sea Islands in Georgia and up to the Savannah River.