Tipaza (formerly Tefessedt, Chenoua: 50px Bazar, Arabic: تيپازة‎‎) is a Berber-speaking town on the coast of Algeria, capital of the Tipaza Province. When it was part of the Roman Empire, it was called Tipasa. The modern town, founded in 1857, is remarkable chiefly for its sandy beach, and ancient ruins. 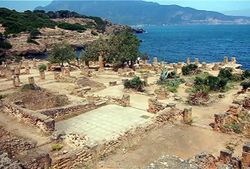 Tipasa, as it was then called, was an ancient Punic trading-post conquered by Ancient Rome and turned into a military colony by the emperor Claudius for the conquest of the kingdoms of Mauretania.[1]

Afterwards it became a municipium called Colonia Aelia Tipasensis, that reached the population of 20,000 inhabitants in the fourth century according to Stéphane Gsell.

The city was an important Christian center during the last centuries of Roman domination, with 3 basilicas.

In the nineteenth century the place was settled again. Now it is a town of nearly 30,000 inhabitants. The city is an important tourist place in modern Algeria, mainly because of the Tipasa ruins.

Near Tipaza, the Tipaza longwave transmitter is broadcasting French language Channel 3 radio programs from the Algerian Broadcasting Company. The longwave frequency 252 kHz can be well received in many parts of Europe.

The town and its surroundings is home to the largest Berber-speaking group of western Algeria, the Chenoua people.