The Tipstaff is an officer of a court or, in some countries, a law clerk to a judge. The duties of the position vary from country to country. It is also the name of the rod of authority of such a person or police officer. The emblem of two crossed tipstaffs (tipstaves) is used to denote the rank of assistant chief constable or commander in the UK police service. 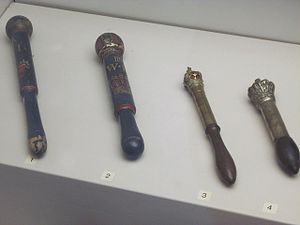 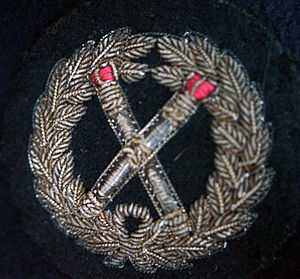 The office of the Tipstaff is thought[by whom?] to have been created in the 14th century. One of the earliest records of the Tipstaff was mentioned in 1570: "The Knight Marshall with all hys tippe staues". It is a position of both law enforcement and ceremonial duties.[1]

An earlier mention of tipstaff is in 1555 when the Rev'd Dr Rowland Taylor was burned at the stake during the reign of Queen Mary I for his religious views that were contrary to those of the Archbishop of Canterbury Cranmer and Lord Chancellor Gardiner. In Foxe's Book of Martyrs it states that Dr Taylor would have spoken to the people but as soon as he opened his mouth the yeoman of the guard thrust a tipstaff into his mouth, and would in no wise permit him to speak. This is also quoted in the book Five English Reformers by J. C. Ryle[2]

The name originates from the early law enforcement officers who would apprehend a person intended for arrest by enforcing their duty, if necessary, with a tipped staff or stave. The staff was made of wood or metal or both, topped with a crown. The crown, which unscrewed, was removed to reveal a warrant of arrest inside the hollow staff. Some staffs were definitely a means of protection and this is where the present day policeman's baton originates.[1] 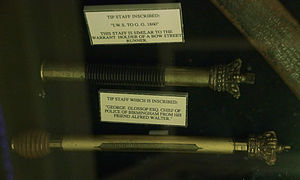 Examples remain at the Royal Courts of Justice and the Metropolitan Police museum in London and vary depending on the type and rank of officer.[clarification needed] These tipstaves were first carried in the late 18th and early 19th centuries. When detectives (in plain clothes) were first authorised the tipstaves issued to plain clothes officers from 1867 were re-issued in 1870 engraved "Metropolitan Police officer in plain clothes".[clarification needed][1]

The staff kept at the Royal Courts of Justice is now only used on ceremonial occasions. It is 12 inches in length and made of ebony decorated with a silver crown and three bands of silver engraved with the Royal Arms at the top. Around the middle is inscribed "AMOS HAWKINS, TIPSTAFF COURTS OF CHANCERY" and around the bottom is inscribed "Appointed 14th January, 1884, by the Rt. Hon. The Earl of Selborne, L.C.” with another coats of Royal Arms. The date was that on which this staff was first used, soon after the Law Courts were opened. Prior to 1884, each Tipstaff had his own staff, which he retained when he retired.[1]

In Australia, the position equivalent to a law clerk is known either as "Associate" (in the Federal Court of Australia and the High Court of Australia) or "Tipstaff" (in the Supreme Courts of each State). The positions usually run for one year, although they are sometimes extended to two years.

The duties of associates and tipstaves can include research, reviewing draft judgments and providing feedback or criticism to the judge, reading and summarising court materials, attending to the judge in court, and also assisting with chambers, administrative or personal tasks. On occasion, some associates and tipstaves are asked to write draft judgments, or parts of judgments. However, these duties can vary between different courts, and also depend on the individual judge.

In the High Court, each of the seven High Court judges has two associates at any given time. Usually, one associate is based permanently in Canberra, the capital of Australia and the seat of the Court, and one travels with the judge when the Court is on circuit to the other capital cities of Australia. The travelling associate in practice is usually based in the judge's home city. Associateships at the High Court are extremely competitive and usually go to the top graduates from the top law schools of Australia. Each judge has his or her own method for interviewing and appointing associates. Previous associates have written that the nature of the associate's role is different from that of a law clerk in the United States.[3]

The judges of the Federal Court and the Supreme Courts of each State and Territory generally have one Associate and one Tipstaff each. These positions are also extremely competitive, and again go to the top graduates from the top law schools of Australia.

There are also research positions available at the superior courts in Australia and the High Court. These positions are similarly staffed by recent law graduates and young lawyers.

The High Court Tipstaff may appoint three assistants and can call on any constable, bailiff or member of the public to assist in carrying out their duties and their jurisdiction extends throughout England & Wales. They are authorised to force entry if necessary and will have a police officer present to prevent breach of the peace. The relevant territorial police force are informed of arrests.[1]

Sometimes a local bailiff or police will detain a person in custody until the Tipstaff arrives to collect him and take him to court or prison. Pentonville Prison (for civil offenders) is obliged to take into custody‚ no matter the situation‚ any people taken there by the Tipstaff.[1] Tipstaff may make the same demands of the custody suite within the RCJ itself, and they are obliged to take into custody any individual brought to them by him.

The Tipstaff heads the Lord Chancellor and judges in a procession at the start of the new legal year‚ preceding them with his staff as a symbol of authority and law enforcement. They also lead the Lord Mayor from his golden coach to the Lord Chief Justice's Court for the "swearing in" of the Lord Mayor‚ afterwards attending the Lord Mayor's Banquet having led the Lord Chancellor into the Guildhall. The black uniform‚ only worn on ceremonial occasions‚ is based on that of a Victorian police inspector. They wear a black hat with gold braid trimmings and jacket with silver buttons‚ a wing collar with a white bow tie and white gloves. The Tipstaff is the only person authorised to make an arrest within the precincts of the Royal Courts of Justice.[1]

Every applicable order made in the High Court is addressed to the Tipstaff: "I hereby command you the Tipstaff and your assistants in Her Majesty's name to take and safely convey and deliver the said ... to the Governor of Her Majesty's Prison ..."(as in the case of making an arrest). The majority of their work involves taking children into custody (i.e. a place of safety)‚ including cases of child abduction abroad.[1]

In child abduction cases, there may be a 'seek and locate' order backed by a bench warrant ordering any person with knowledge of the child to give that information to the Tipstaff or his deputy or assistants. Related orders may require the alleged abductor to hand his passport and other travel documents to the Tipstaff, and order the Tipstaff to take the child and deliver him/her to a designated place. There may also be a 'port alert' executed by the Tipstaff, to help prevent the child being taken abroad.[1]

In the case of children who have been declared a ward of court i.e. cases where the court is acting in loco parentis the Tipstaff has a role in ensuring that those children are delivered to the locations specified by the court.[1]

Tipstaffs and Court Criers in Northern Ireland have no enforcement role, and act as personal assistants to High Court and County Court judges.[6]

In some states of the United States, the Tipstaff is called a Tipstave and is responsible for courtroom decorum.[citation needed] His position is similar to that of a bailiff. The Civil Division of the Municipal Court of Philadelphia employs Tipstaves as clerks to the court.[7]