Tironian notes (notae Tironianae) is a system of shorthand said to have been invented by Cicero's scribe Marcus Tullius Tiro. Tiro's system consisted of about 4,000 signs,[citation needed] somewhat extended in classical times to 5,000 signs. In the European Medieval period, Tironian notes were taught in monasteries and the system was extended to about 13,000 signs (see scribal abbreviations).[1] The use of Tironian notes declined after 1100 but some use can still be seen in the 17th century.[2][3]

Two Tironian et in context (second line from the top and third line from bottom), from a Bible written by a Belgian scribe.

Tironian notes can be themselves composites (ligatures) of simpler Tironian notes, the resulting compound still being far shorter than the word it replaces. This accounts in part for the large number of attested Tironian notes, and for the wide variation in estimates of the total number of Tironian notes. Further, the "same" sign can have other variant forms, leading to the same issue.

The earliest western shorthand system known to us is that employed by the Greek historian, Xenophon in the memoir of Socrates, called notae socratae.

The first report of the usage of Tironian notes is by Plutarch who notes that in 63 BC it was used to record Cato's denunciation against Catiline:

This only of all Cato's speeches, it is said, was preserved; for Cicero, the consul, had disposed in various parts of the senate-house, several of the most expert and rapid writers, whom he had taught to make figures comprising numerous words in a few short strokes; as up to that time they had not used those we call shorthand writers, who then, as it is said, established the first example of the art.

Dio Cassius attributes to Maecenas the invention of shorthand, and states that he employed his freedman Aquila in teaching the system to numerous others.[5]

Isidore of Seville, however, details another version of the early history of the system,[6] ascribing the invention of the art to Quintus Ennius, who he says invented 1100 marks (Latin: notae). Isidore states that Tiro brought the practice to Rome, but only used Tironian notes for prepositions. Isidore tells of the development of additional Tironian notes by various hands, viz., Vipsanius, "Philargius", and Aquila (as above), until Seneca systematized the various marks to approximately 5000 Tironian notes.

In the Middle Ages, notae to represent words were widely used in conjunction with other scribal abbreviations and the initial symbols were expanded to 14,000 by the Carolingians; but the stenographic alphabet notation had a "murky existence" (C. Burnett) as it was often associated with witchcraft and magic,[citation needed] and was forgotten until interest was rekindled by Thomas Beckett, archbishop of Canterbury, in the 12th century. In the 15th century Johannes Trithemius, abbot of the Benedictine abbey of Sponheim, discovered the notae Benenses: a psalm and a Ciceronian lexicon written in Tironian shorthand.[7] 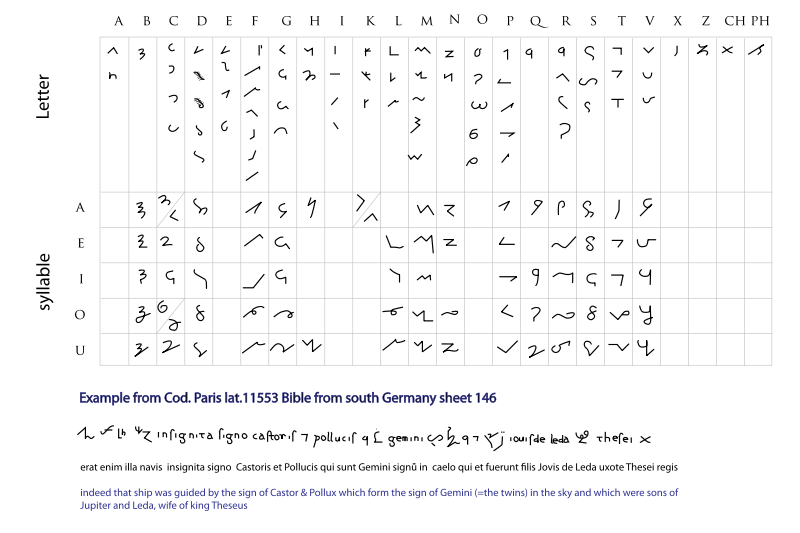 Example of Tironian letter which can be modified with various marks to form more complex notes. Some glyphs may be identical for different letters. In the text example due to evolution of writing (separate from notes) there are no capital letters, letter s appears as a long s, st is a ligature and there are no dots on i. 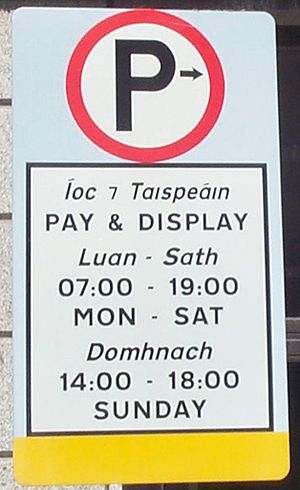 A pay and display sign in Dublin with the Tironian et for the Irish agus ("and").

Tironian notes are still used today, particularly, the Tironian "et", used in Ireland and Scotland to mean and (where it is called agus in Irish and Scottish Gaelic), and in the "z" of "viz." (for 'et' in videlicet).

Tironian Et (with a glyph similar to the r rotunda) in the abbreviation "etc." in a German print from 1845, using Fraktur

In blackletter texts (especially in German printing) it was used in the abbreviation ⟨⁊c.⟩ = etc. (for et cetera) still throughout the 19th century.

The Tironian "et" can look very similar to an r rotunda, ⟨ꝛ⟩, depending on the typeface.

In Old English Manuscripts, the Tironian "et" served as both a phonetic and morphological place holder. For instance a Tironian "et" between two words would be phonetically pronounced "ond" and would mean "and". However, if the Tironian "et" followed the letter "s", then it would be phonetically pronounced "sond" and mean water (cognate with English sound). This additional function of a phonetic as well as a conjunction placeholder has escaped formal Modern English; for example, one may not spell the word "sand" as "s&" (although this occurs in an informal style practised on certain internet forums). This practice was distinct from the occasional use of "&c." for "etc.", where the & is interpreted as the Latin word et ("and") and the "c." is an abbreviation for Latin cetera ("(the) rest").

The circumstances in which most Tironian notes may be successfully input and displayed on modern computing devices are at present few.

The Tironian et ⟨⁊⟩ "and", however, available at Unicode point U+204A, can in fact be made to display (e.g., for documents written in Irish or Scottish Gaelic) on a relatively wide range of devices: on Microsoft Windows, it can be shown in Segoe UI Symbol (a font that comes bundled with Windows Vista onwards); on Mac OS X and iOS devices in Helvetica; and on Windows, OS X, Google Chrome OS, and Linux in the free DejaVu Sans font (which comes bundled with Chrome OS and various Linux distributions).

A number of other Tironian signs have been assigned to the Private Use Area of Unicode by the Medieval Unicode Font Initiative (MUFI), who also provide links to free typefaces that support their specifications.

Some applications (for example the Scottish Gaelic localisations of Firefox and Opera, and the online edition of the "Dictionary of the Irish Language") substitute the Tironian et with the box-drawing character U+2510 ┐, as it displays widely. The numeral 7 is also used in informal contexts such as Internet forums and occasionally in print.[8]