From Infogalactic: the planetary knowledge core
Jump to: navigation, search
For other uses, see Tiye (disambiguation).

Tiye (c. 1398 BC – 1338 BC, also spelled Taia, Tiy and Tiyi) was the daughter of Yuya and Tjuyu (also spelled Thuyu). She became the Great Royal Wife of the Egyptian pharaoh Amenhotep III. She was the mother of Akhenaten and grandmother of Tutankhamun. Her mummy was identified as "The Elder Lady" found in the tomb of Amenhotep II (KV35) in 2010.

Tiye's father, Yuya, was a non-royal, wealthy landowner from the Upper Egyptian town of Akhmin,[1] where he served as a priest and superintendent of oxen or commander of the chariotry.[2] Tiye's mother, Thuya, was involved in many religious cults, as her different titles attested (Singer of Hathor, Chief of the Entertainers of both Amun and Min...),[3] which suggests that she was a member of the royal family.

Egyptologists have suggested that Tiye's father, Yuya, was of foreign origin due to the features of his mummy and the many different spellings of his name, which might imply it was a non-Egyptian name in origin.[4] Some suggest that the queen's strong political and unconventional religious views might have been due not just to a strong character, but to foreign descent.[3]

Tiye also had a brother, Anen, who was Second Prophet of Amun.[5] Other Egyptologists speculated that Ay, a successor of Tutankhamun as pharaoh after the latter's death, also might have been descended from Tiye. No clear date or monument can confirm the link between the two, but these Egyptologists presumed this by Ay's origins, also from Akhmin, and because he inherited most of the titles that Tiye's father, Yuya, held during his lifetime, at the court of Amenhotep III.[3][6]

Tiye was married to Amenhotep III by the second year of his reign. He had been born of a secondary wife of his father and needed a stronger tie to the royal lineage.[4] He appears to have been crowned while still a child, perhaps between the ages of six to twelve. They had at least seven, possibly more children:

1) Sitamun- The eldest daughter, who was elevated to the position of Great Royal Wife around year 30 of her father's reign.[7]

2) Isis- Also elevated to the position of Great Royal Wife.[7]

3) Henuttaneb- Not known to have been elevated to Queenship, though her name does appear in a Cartouche at least once.

4) Nebetah- Sometimes thought to have been renamed Baketaten during her brother's reign.

7) Smenkhkare- traditionally seen as one of Akhenaten's immediate successors, today some Egyptologists such as Aidan Dodson believe he was the immediate predecessor of Neferneferuaten and a junior co-regent of Akhenaten who did not have an independent reign.[8] Sometimes identified with the mummy from KV55, and therefore Tutankhamun's father.

9) Baketaten- Sometimes thought to be Queen Tiye's daughter, usually based on a stelae with Baketaten seated next to Tiye at dinner with Akhenaten and Nefertiti.[1] 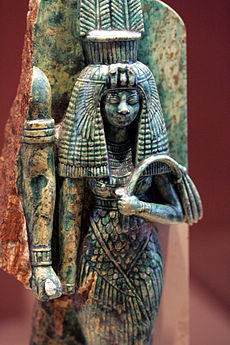 Queen Tiye, whose husband, Amenhotep III, may have been depicted to her right in this broken statue

Her husband devoted a number of shrines to her and constructed a temple dedicated to her in Sedeinga in Nubia where she was worshipped as a form of the goddess Hathor-Tefnut.[9] He also had an artificial lake built for her in his Year 12.[10] As the American Egyptologists David O'Connor and Eric Cline note: 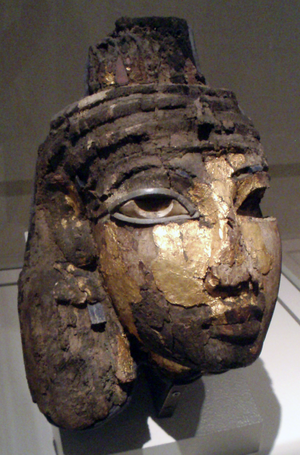 Tiye wielded a great deal of power during both her husband’s and son’s reigns. Amenhotep III became a fine sportsman, a lover of outdoor life, and a great statesman. He often had to consider claims for Egypt's gold and requests for his royal daughters in marriage from foreign kings such as Tushratta of Mitanni and Kadashman-Enlil I of Babylon. The royal lineage was carried by the women of Ancient Egypt and marriage to one would have been a path to the throne for their progeny. Tiye became her husband’s trusted adviser and confidant. Being wise, intelligent, strong, and fierce, she was able to gain the respect of foreign dignitaries. Foreign leaders were willing to deal directly through her. She continued to play an active role in foreign relations and was the first Egyptian queen to have her name recorded on official acts.[12]

Tiye may have continued to advise her son, Akhenaten, when he took the throne. Her son’s correspondence with Tushratta, the king of Mitanni, speaks highly of the political influence she wielded at court. In Amarna letter EA 26, Tushratta, king to Mitanni, corresponded directly with Tiye to reminisce about the good relations he enjoyed with her then deceased husband and extended his wish to continue on friendly terms with her son, Akhenaten.[13]

Amenhotep III died in Year 38 or Year 39 of his reign (1353 BC/1350 BC) and was buried in the Valley of the Kings in WV22; however, Tiye is known to have outlived him for as many as twelve years. Tiye continued to be mentioned in the Amarna letters and in inscriptions as queen and beloved of the king. Amarna letter EA 26, which is addressed to Tiye, dates to the reign of Akhenaten. She is known to have had a house at Amarna, Akhenaten's new capital and is shown on the walls of the tomb of Huya – a "steward in the house of the king's mother, the great royal wife Tiyi" – depicted at a dinner table with Akhenaten, Nefertiti, and their family and then being escorted by the king to her sunshade.[14] In an inscription approximately dated to November 21 of Year 12 of Akhenaten's reign (1338 BC), both she and her granddaughter Meketaten are mentioned for the last time. They are thought to have died shortly after that date. This information is corrorborated by the fact that the shrine which Akhenaten created for her--which was later found transported from Amarna to tomb KV55 in Thebes--bore the later form of the Aten's name which was only used after Year 9 of this pharaoh's reign.[15]

If Tiye died soon after Year 12 of Akhenaten's reign (1338 BC), this would place her birth around 1398 BC, her marriage to Amenhotep III at the age of eleven or twelve, and her becoming a widow at the age of forty-eight to forty-nine. Suggestions of a co-regency between Amenhotep III and his son Akhenaten lasting for up to twelve years continue, but most scholars today, either accept a brief co-regency lasting no more than one year at the most,[16] or no co-regency at all.[14]

The mummy of Queen Tiye, now in the Egyptian Museum

Tiye is believed to have been originally buried in Akhenaten's royal tomb at Amarna alongside her son and granddaughter, Meketaten, as a fragment from the tomb not long ago was identified as being from her sarcophagus. Her gilded burial shrine (showing her with Akhenaten) ended up in KV55 while shabtis belonging to her were found in Amenhotep III's WV22 tomb.[17]

Her mummified remains were found adjacent to two other mummies in an opposite side chamber of Amenhotep II in KV35 by Victor Loret in 1898. The two other mummies were a young boy who died at around the age of ten, thought to be Webensenu or Prince Thutmose and another, younger unknown woman. All three were found together, lying naked side-by-side and unidentified in a small antechamber of the tomb. They had been extensively damaged by ancient tomb robbers.[18] At first, researchers were unable to identify both female mummies and were instead given names with Tiye being labelled as the 'The Elder Lady' while the other woman was 'The Younger Lady'. Several researchers argued that the Elder Lady was Queen Tiye. Some noted that miniature coffins inscribed with her name were found at the tomb of her grandson, Tutankhamun, as memento from a beloved grandmother.[17] There were also some scholars who were skeptical about this theory such as British scholars Aidan Dodson and Dyan Hilton, who once stated that "it seems very unlikely that her mummy could be the so-called 'Elder Lady' in the tomb of Amenhotep II."[17]

By 2010, DNA analysis, sponsored by the Secretary General of the Egyptian Supreme Council of Antiquities Zahi Hawass, was able to formally identify the Elder Lady to be Queen Tiye. Also, the strands of her hair found inside Tutankhamun's tomb matched the DNA of the Elder Lady.[19]