From Infogalactic: the planetary knowledge core
Jump to: navigation, search
This article is about pre-Columbian Nahua state. For other uses, see Tlaxcala (disambiguation). 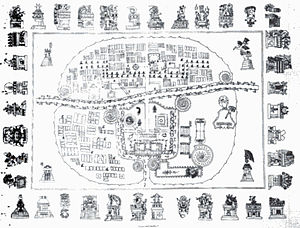 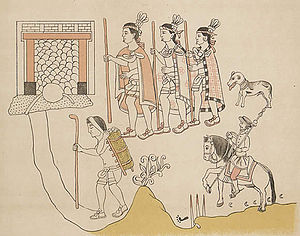 Tlaxcaltecâ allies accompany Hernán Cortés during the Spanish conquest of the Aztec empire, 1519, from the History of Tlaxcala. 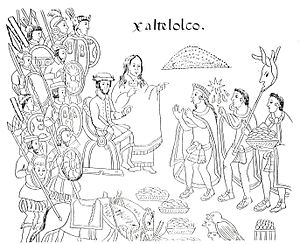 Picture from the History of Tlaxcala showing Cortés meeting with the Tlaxcallan messengers. Their conversation is translated by Doña Malinche.

Ancient Tlaxcala was a republic ruled by a council of between 50 and 200 chief political officials (teuctli [sg.], teteuctin [pl.]) (Fargher et al. 2010). These officials gained their positions through service to the state, usually in warfare, and as a result came from both the noble (pilli) and commoner (macehualli) classes. Following the Spanish Conquest, Tlaxcala was divided into four fiefdoms (señoríos) by the Spanish corregidor Gómez de Santillán in 1545 (26 years after the Conquest). These fiefdoms were Ocotelolco, Quiahuiztlan, Tepeticpac, and Tizatlan. At this time, four great houses or lineages emerged and claimed hereditary rights to each fiefdom and created fictitious genealogies extending back into the pre-Columbian era to justify their claims (Gibson 1952).

Tlaxcala was never conquered by the Aztec empire, but was engaged in a state of perpetual war, or so-called flower wars also known as garland wars. During the Spanish conquest of Mexico, Tlaxcala allied with the Spaniards against the Aztecs, supplying a large contingent for – and at times the majority of – the Spanish-led army that eventually destroyed the Aztec empire.

As a result of their alliance with the Spaniards, Tlaxcala had hidalgo privileged status within Spanish colonial Mexico. After the Spanish conquered Tenochtitlan and the rest of Mexico, Tlaxcala was allowed to survive and preserve its pre-Columbian culture. In addition, as a reward to the Tlaxcalans unyielding loyalty to the Spanish, the city and its inhabitants largely escaped the pillaging and destruction following the Spanish conquest.

Conquistador Bernal Díaz del Castillo describes the first battle between the Spanish force and the Tlaxcalteca as surprisingly difficult. He writes that they probably would not have survived, had not Xicotencatl the Elder, and Maxixcatzin, persuaded Xicotencatl the Younger- the Tlaxcallan warleader- that it would be better to ally with the newcomers than to kill them.[1]:140–188

Xicohtencatl the Younger was later condemned by the Tlaxcaltecan ruling council and hanged by Cortés for desertion in April 1521 during the siege of Tenochtitlan.

Due to protracted warfare between the Aztecs and the Tlaxcala, the Tlaxcala were eager to exact revenge, and soon became loyal allies of the Spanish. Even after the Spanish were expelled from Tenochtitlan, the Tlaxcala continued to support their conquest. Tlaxcala also assisted the Spanish in the conquest of Guatemala.[2]

During the 100 years of the colonial period, the Tlaxcalan people were regarded as being of higher status and received better treatment compared to the other indigenous peoples of New Spain. However, the indigenous population who had been living in Tlaxcala were reduced to a small minority. According to the Catholic Encyclopedia, in 1625 the city of Tlaxcala had only 700 people, compared to a population of 300,000 a century earlier, owing to epidemics, emigrations, and the work of digging the canal of Nochistongo to drain the Valley of Mexico.[3]