From Infogalactic: the planetary knowledge core
Jump to: navigation, search
File:Plan of London Docks by Henry Palmer 1831.JPG
Plan drawing of London Docks in 1831. Tobacco Dock is the large almost-square building marked "Tobacco Warehouse". Most of the docks have since been filled in.

Tobacco Dock is a Grade I listed warehouse in Docklands, East London, England. It was constructed in approximately 1811 and served primarily as a store for imported tobacco.

It is a brick building with many brick vaults and some fine ironwork. It was adjacent to a particular set of docks named London Docks, which have now mostly been filled in. Tobacco Dock is owned by Messila House, a Kuwaiti investment company.

At its north entrance stands a 7 ft tall bronze sculpture of a boy standing in front of a tiger. In the late 1800s, wild animal trader Charles Jamrach owned the world's largest exotic pet store, located on Ratcliffe Highway, near to Tobacco Dock. The statue commemorates an incident where a Bengal tiger escaped from Jamrach's shop into the street and picked up and carried off a small boy, who had approached and tried to pet the animal having never seen such a big cat before. The boy escaped unhurt after Jamrach gave chase and prised open the animal's jaw with his bare hands.[1] 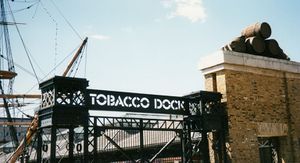 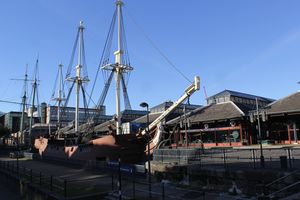 In 1990 the structure was converted into a shopping centre at a development cost of £47 million and it was intended to create the "Covent Garden of the East End"; the scheme was unsuccessful, though, and it went into administration. Tobacco Dock is not in a major retail area and has only moderately good public transport access. Since the mid-1990s the building has been almost entirely unoccupied, with the only tenant being a sandwich shop, and a plan to convert it into a factory outlet did not come to fruition.

In 2003, English Heritage placed it on the Buildings at Risk Register. In 2004, a meeting was arranged with the owners, investment company Messila House which is owned by the Al-Hasawi family of Kuwait, to find a way to ensure the survival of the historic structure. An English Heritage spokesman commented: "We see Tobacco Dock as a future priority because it is too large and important a site to be left standing empty. It is one of the most important buildings in London and if brought back into use it would reinvigorate the whole area."[2] In 2005 the owners announced that they were working on a mixed-use scheme for Tobacco Dock which may incorporate a four-star hotel, shops, and luxury apartments. As of July 2012, the upper areas of the complex are still accessible to the general public whilst the majority of the lower areas are now cordoned off.

Tobacco Dock is regularly used for large corporate and commercial events. In early 2004, part of the building was used as the studios of the Channel 4 reality television show Shattered. Several film première after-parties have also been held there. Scenes in the sixth episode of the 2008 BBC drama Ashes to Ashes were filmed at Tobacco Dock, which was set in 1981 despite the centre only being developed for its failed use as a shopping centre in 1990. In February 2011 the complex was used to hold the Secret Cinema event for The Red Shoes.

In 1980 the upper floor of Tobacco Dock was used as the filming location for the music video "Messages" by the band Orchestral Manoeuvres in the Dark.

In the summer of 2012 the Ministry of Defence used Tobacco Dock as temporary accommodation for 2,500 soldiers deployed to guard the Olympic Games in London.[3]

In November 2013 and 2014 it was used to host RuneFest 3 and 4 respectively,[4] an event celebrating RuneScape, the online Role-playing video game.

The 11th British Academy Games Awards were held at Tobacco Dock on 12 March 2015.

Large ticketed dance events have been held regularly since 2014, organised by LWE, and hosting up to 5,000 people.[5]