Tobias Vincent "Tobey " Maguire (born June 27, 1975)[1] is an American actor and film producer who began his career in the late 1980s. Maguire's first appearance in a feature film was a non-speaking part in 1989's The Wizard. He is known for his role as Peter Parker / Spider-Man in Sam Raimi's Spider-Man film trilogy (2002–2007), as well as for his roles in the fantasy comedy-drama Pleasantville (1998), the drama The Cider House Rules (1999), the comedy Wonder Boys (2000), the biographical sports psychological-drama thriller Seabiscuit (2003), the villainous Corporal Patrick Tully in Steven Soderbergh's The Good German (2006), the psychological thriller Brothers (2009), and the drama The Great Gatsby (2013). He has been nominated for Screen Actors Guild and Golden Globe Awards and received two Saturn Awards, including one for Best Actor.

Maguire was born in Santa Monica, California, to Wendy (née Brown), a secretary turned screenwriter and producer, and Vincent Maguire, a construction worker and cook. He has four half-brothers.[3] One of his paternal great-grandfathers was Austrian, and a great-grandmother was Puerto Rican.[4] His parents, 18 and 20 years old, were unmarried at the time of his birth; the two married and subsequently divorced when Maguire was two.[5] Maguire spent much of his childhood moving from town to town, living with each parent and other family members.[6] During his childhood, Maguire entertained the idea of becoming a chef and to that end wanted to enroll in a home economics class as a sixth grader. His mother offered him $100 to take a drama class instead, and Tobey agreed.[7]

The nomadic nature of his school-age years began to take a toll on Maguire emotionally, and finally, after another relocation for his freshman year, Maguire dropped out of high school and did not return. Instead, he pursued an acting career.[8] By 2000, Maguire had obtained his GED, noting that during his school days, "I was not doing school; I was showing up, but...not really giving myself."[9]

Maguire's first appearance in a feature film was in 1989's The Wizard. He plays one of Lucas Barton's goons (one of three competitors at a video game competition) and had no lines. Maguire initially worked as a child actor in the early 1990s, often playing roles much younger than his chronological age; as late as 2002, Maguire was still playing teenagers while in his mid-20s. He appeared in a variety of commercials and TV and movie roles, working opposite such actors as Chuck Norris (Walker, Texas Ranger), Roseanne Barr (Roseanne), and Tracey Ullman (Tracey Takes On...). Eventually, Maguire was cast as the lead in the FOX TV series Great Scott!, which was cancelled five weeks later.[citation needed]

During many of his auditions, Maguire found himself auditioning for roles opposite another rising actor, Leonardo DiCaprio. The pair quickly became friends and made an informal pact to help each other get parts in their movies/TV shows/other projects. For example, both auditioned for the same part in the 1990 TV series based on the 1989 comedy Parenthood. DiCaprio was cast, and Maguire later got a guest role at least partly on DiCaprio's recommendation. The same scenario played itself out during casting for the 1993 movie This Boy's Life (featuring Robert De Niro as the lead); DiCaprio got the main teen role (coincidentally, the character was named "Toby") and Maguire got a part as one of Toby's friends.[10]

By the mid-1990s, Maguire was working steadily but was also becoming involved in the hard-partying lifestyle of some of his fellow young actors. In 1995, Maguire requested director Allan Moyle to release him from his part in the movie Empire Records. Moyle agreed, and all of Maguire's scenes were deleted from the final film.[11] Maguire then sought help for a drinking problem from Alcoholics Anonymous; he has been sober ever since.[12]

As part of his recovery from alcoholism and learning to deal with his self-described "addictive and compulsive nature",[12] Maguire changed his career path slightly in order to obtain roles where he and DiCaprio would not always be in competition for the same part, and the move paid off when he got the role of Paul Hood, a teenage boarding school student whose narration anchors the action in Ang Lee's 1997 film, The Ice Storm. This led to a variety of lead roles in films such as Pleasantville, The Cider House Rules, and Wonder Boys.[citation needed]

In the 1998 film Fear and Loathing in Las Vegas he portrayed a hitchhiker who meets Raoul Duke and Dr. Gonzo during their drive to Las Vegas.[13]

In Ride with the Devil (1999), Maguire portrayed Jakob Roedel, opposite Jewel Kilcher. Here he played the son of a unionist German immigrant who joins his southern friends in the Missouri riders, avenging the atrocities committed against Missourians by Kansas Jayhawkers and redleggers.[14]

In 2001, Maguire took a role that featured his youthful-sounding voice, a beagle puppy named Lou, in the family movie Cats & Dogs.[15] 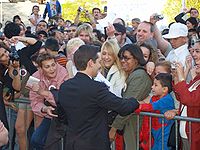 In 2002, Maguire starred in Spider-Man, based on the popular Marvel Comics superhero. The film was a major success and made Maguire into a star. He reprised the role in the sequels Spider-Man 2 (2004) and Spider-Man 3 (2007), and has also provided the voice of Spider-Man for the video game adaptations of the films. All three movies went on to be part of the highest grossing movies each year.[16][17][18]

Maguire's performance as Spider-Man earned him some glowing reviews. For instance, Mark Caro of the Chicago Tribune wrote that "with his big, round, soulful eyes, Maguire always has been able to convey a sense of wonder, and his instinct for understatement also serves him well here."[19] Due to script and production complications, a proposed fourth Spider-Man movie did not materialize. Sony has rebooted the franchise, and has focused on a younger Spider-Man (played by Andrew Garfield) as Peter Parker is still in high school in the movie; Garfield has a more youthful appearance than Maguire.[20] The film, titled The Amazing Spider-Man, was released on July 3, 2012.

After the Sony-Marvel deal to have Spider-Man in the Marvel Cinematic Universe, Tom Holland took over the role in Captain America: Civil War.[21] In late 2015, arachnologists Yuri M. Marusik and Alireza Zamani honored his portrayal of the role by naming a new species of Filistatidae spiders after him, namely Filistata maguirei.[22][23][24][25]

Maguire had a lead role as the jockey John M. "Red" Pollard in Seabiscuit, about the famous racehorse Seabiscuit.[26] In 2006, Maguire starred in his first villainous role as Corporal Patrick Tully opposite George Clooney and Cate Blanchett in Steven Soderbergh's The Good German, based on the Joseph Kanon novel of the same name.[27] He is also a producer whose production credits include 25th Hour (2002), Whatever We Do (2003), and Seabiscuit (2003), for which he served as executive producer.[2]

In 2008, Maguire made a cameo appearance in the action comedy film Tropic Thunder as a gay 18th century[28] monk with his eye on Father O'Malley (Kirk Lazarus, the character played by Robert Downey, Jr. in Tropic Thunder) in the faux trailer for Satan's Alley. Maguire was a last-minute replacement in the role, and due to previously-scheduled commitments was only available to be on set for two hours to film his scenes.[29] Near the end of Tropic Thunder, it is revealed that Maguire's character has been nominated for a Best Actor Oscar for Satan's Alley, which he loses to Tugg Speedman (Ben Stiller) for his role in Tropic Blunder, ironically presented by Kirk Lazarus.[citation needed]

In 2009, he starred alongside Jake Gyllenhaal and Natalie Portman in the Jim Sheridan-directed war drama Brothers as Sam Cahill, a prisoner of war who returns from Afghanistan and starts believing that his wife has become romantically involved with his brother. He received critical acclaim and a Golden Globe nomination for his performance in the film. Of the nomination, Maguire said, "I had no expectation about getting a nomination, but I was watching nonetheless. My wife and my son got really excited. I was sort of surprised – I was like, 'Oh, wow.' And I couldn't hear the latter part of my name." [30] Maguire lost to Jeff Bridges for his role in Crazy Heart.

Maguire and DiCaprio once again performed together, in Baz Luhrmann's remake of The Great Gatsby; DiCaprio played the title role, while Maguire played the story's narrator, Nick Carraway.[31] The movie was released in America on May 10, 2013.[32]

Maguire next starred in the Edward Zwick-directed biopic Pawn Sacrifice, where he portrayed Bobby Fischer. The film premiered at the 2014 Toronto International Film Festival, where Maguire's performance was widely praised.

Maguire is attached to produce Afterburn, a science fiction movie based on the comic book Red 4 by Paul Ens and Scott Chitwood. Neal Moritz's Original Films is also producing, and Relativity is in talks to board the project, about treasure hunters in a post-Apocalyptic Earth looking for artifacts from human civilization. It has been announced that Gerard Butler is in negotiations to star in the film and Antoine Fuqua is in talks to direct.[33]

Maguire's company is also co-producing an adaptation of a mystery novel by Isaac Adamson called Tokyo Suckerpunch with Sony Pictures. The film will star Maguire in the role of American reporter Billy Chaka, who investigates the murder of a Japanese friend in Tokyo.[34] Anne Hathaway has also been confirmed for the film.[35] 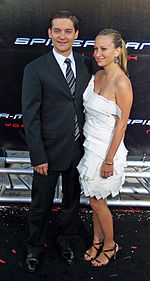 Maguire with his wife, Jennifer Meyer

Maguire has been a vegetarian since 1992 and in 2009 became a vegan.[36][37][38] PETA declared him the World's Sexiest Vegetarian in 2002.[39] He often makes changes in his diet to either gain or lose weight for movie roles; for example, he dramatically decreased his calorie intake for Seabiscuit followed by a rapid increase to regain weight for Spider-Man 2.[40]

Maguire has been sober since the age of 19 after experiencing "some difficulty" with alcohol in his late teens.[41]

In an article for Premiere magazine, Sam Raimi confirmed the long-standing rumor that Maguire and his Spider-Man co-star Kirsten Dunst had "a thing" going on during the 2001 shooting of the first film. As Raimi explained for the article, "I'm so dumb, because I met with them for dinner one night during the shooting to talk about the next day's scenes. And I go, 'Okay, well, that's it for the meeting.' And then I ask Kirsten, 'Can I drive you home?' And they look at each other and she goes, 'No, no, I'm going to play a game of Touch 10 with Tobey.' I don't know, it was some game. I thought, 'That's weird. She's got to work tomorrow.'"[42]

Maguire met jewelry designer Jennifer Meyer in 2003 while he was shooting the movie Seabiscuit at Universal Studios, and became engaged in April 2006. Their daughter Ruby Sweetheart Maguire was born on November 10, 2006.[43] Ruby's middle name comes from a childhood nickname of Meyer's given to her by her grandmother, who died a few months before Ruby's birth.[44] The couple married on September 3, 2007, in Kona, Hawaii.[45] Their second child, son Otis Tobias Maguire, was born on May 8, 2009.[46]

In 2004, Maguire took up tournament poker. He has finished in the money in several events and has been tutored by poker professional Daniel Negreanu. Maguire can be seen on ESPN's coverage of the 2005, 2006, and 2007 World Series of Poker Main Event Championship. Moreover, professional poker player Phil Hellmuth said during the June 28, 2007, episode of Poker After Dark that Tobey has won $10 million by playing poker in Hollywood.[47] Maguire played in the 2007 World Series of Poker. He survived days 1a, 2a, and 3 but was eliminated in 292nd place on the fourth day, taking $39,445 in prize money.[48]