From Infogalactic: the planetary knowledge core
Jump to: navigation, search
This article is about the pottery jug in the form of a seated person. For other uses, see Toby Jug (disambiguation). 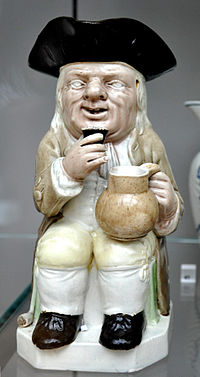 A Toby Jug - also sometimes known as a Fillpot (or Philpot) - is a pottery jug in the form of a seated person, or the head of a recognizable person (often an English king). Typically the seated figure is a heavy-set, jovial man holding a mug of beer in one hand and a pipe of tobacco in the other and wearing 18th century attire: a long coat and a tricorn hat. The tricorn hat forms a pouring spout, often with a removable lid, and a handle is attached at the rear. Jugs depicting just the head and shoulders of a figure are also referred to as Toby Jugs, although these should strictly be called "Character Jugs".[1]

The original Toby Jug, with a brown salt glaze, was developed and popularised by Staffordshire potters in the 1760s.[2] It is thought to be a development of similar Delft jugs that were produced in the Netherlands.[3] Similar designs were produced by other potteries, first in Staffordshire, then around England, and eventually in other countries. The Jug in the form of a Head, Self-portrait by Paul Gauguin is an unusual example from fine art.

There are competing theories for the origin of the name "Toby Jug".[4] One is that it was named after the intoxicated, jovial character of Sir Toby Belch in Shakespeare's play, Twelfth Night.[citation needed] Another is that it was named after a notorious 18th century Yorkshire drinker, Henry Elwes, who was known as "Toby Fillpot" (or Philpot),[5] who was mentioned in an old English drinking song The Brown Jug, the popular verses of which were first published in 1761.

In the book and 1949 film Twelve O'Clock High a Toby Jug depicting Robin Hood is used as a signal in the Officer's Club, to discreetly warn aircrews that there will be a mission the following day, without revealing this to outsiders who might be visiting. The Toby Jug plays a pivotal role in the film.