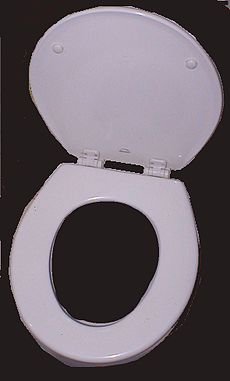 A Bemis Manufacturing Company toilet seat for a flush toilet.

A toilet seat is a hinged unit consisting of a seat, and usually a lid, which is bolted onto a toilet bowl for a toilet used in a sitting position (as opposed to a squat toilet). The seat can be either for a flush toilet or a dry toilet. A toilet seat consists of the seat itself, which may be contoured for the user to sit on, and the lid, which covers the toilet when it is not in use – the lid may be absent in some cases, particularly in public restrooms. When the lid is down, the lid itself is also used as a seat when needed.

The seat is generally lifted when a man stands to urinate, or while cleaning the toilet. The issue of men leaving the seat up or putting it back down after use, particularly for the benefit of women, who customarily sit down both to urinate and defecate, is a perennial topic of discussion and light humor, with it often being argued that leaving the toilet seat up is more efficient for men, but putting it down is more considerate of women.[1][2] If present, the lid is frequently left open, but it can be closed to prevent small items from falling in, and to reduce the spread of germs and odors when the water is aerosolized on flushing.[3] The lid usually is closed for aesthetic purposes, or to provide a chair in the bathroom.

Toilet seats are manufactured in a range of different styles and colors, and they may be furnished matching the style of the toilet itself. They are usually built to fit the shape of the toilet bowl: two examples of this being the elongated bowl and the regular bowl. Some toilet seats are fitted with slow-closing hinges to reduce noise by preventing them from slamming against the bowl.

Some seats are made of various types of fancy wooden materials, like oak or walnut, and others are made soft for added comfort. Seats with printed multi-colored designs, such as floral or newsprint, have been fashionable at times. Other designs are made of transparent plastic, encapsulating small decorative items such as seashells or coins. The price of toilet seats varies quite considerably.

Decorative textile covers for the toilet seat lid have gone in and out of fashion. Advocates claim that they allow the toilet to be used as a more comfortable seat and provide another way of decorating a bathroom, while critics view them as a sanitation problem which creates unnecessary work.

Some metal toilets, such as those in many jails and prisons, have built-in toilet seats that cannot be removed, so that an inmate cannot fashion it into a weapon, shield or escape tool. 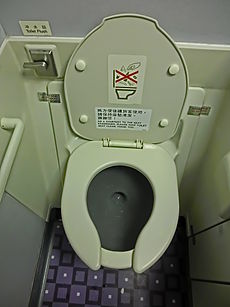 The International Association of Plumbing and Mechanical Officials' Uniform Plumbing Code, section 409.2.2, requires that "all water closet seats, except those within dwelling units or for private use, shall be of the open front type". There is an exception for toilets with an automatic toilet-seat cover dispenser. The code has no legal force, but because it is followed by many public authorities, many public toilets feature open front toilet seats (also called "split seats").[4]

The purpose for this seat design is to allow women to wipe the perineal area after using the toilet without contacting the seat. It also omits an area of the seat that could be contaminated with urine, and avoids contact between the seat and the user's genitals.[4]

High-tech toilet seats may include many features, including a heated seat, a bidet, and a blow drier. High-tech seats are most common in Japan, where a seat with integrated bidets is colloquially called a Washlet, after a leading brand. Electrically heated toilet seats have been popular in Japan since the 1970s. Since Japanese toilet rooms are often unheated, the toilet seat sometimes doubles as a space heater. Integrated bidets date from around 1980, and have since become very popular in Japan, and are becoming more common in most other developed countries.

Water-heated seats[citation needed] were in use in royal homes in Britain in the twentieth century. The first electrically-heated toilet seat was manufactured by Cyril Reginald Clayton at St Leonard's on Sea in Sussex. A UK patent was applied for on 5 January 1959, filing on 4 January 1960 and granted in August 1963 (UK patent no. 934209). The first model, the 'Deluxete', was made of fiberglass with a heating element in the lid triggered by a mercury switch that warmed the seat when the lid was down. Subsequent improvements were made and another UK patent applied for, this time for a deodorizing model with integral fan on 20 May 1970. It was granted on 17 May 1972 (UK patent no. 1260402). At first marketed as the 'Deodar', this model was later sold as the 'Readywarm'. Among the early users of the 'Deluxete' was racing driver Stirling Moss. With the permission of Reginald Clayton, the electrically-heated seat was further developed by the Japanese firm Matsushita. In 1993, Matt DiRoberto of Worcester, Massachusetts invented the padded toilet seat, an early 1990s fad.

The toilet seat functions as a comic standby for sight gags relating to toilet humor. The most common is someone staggering out of a bathroom after an explosion with a toilet seat around his neck. In the television show Dead Like Me, George Lass, the main character, is killed when a zero-G toilet seat from space station Mir re-enters the atmosphere.

The P-3C Orion antisubmarine aircraft went into service in 1962. Twenty-five years later, in 1987, it was determined that the toilet shroud, the cover that fits over the toilet, needed replacement. Since the airplane was out of production this would require new tooling to produce. These on-board toilets required a uniquely shaped, molded fiberglass shroud that had to satisfy specifications for vibration resistance, weight, and durability. The molds had to be specially made, as it had been decades since their original production. The price reflected the design work and the cost of the equipment to manufacture them. Lockheed Corporation charged $34,560 for 54 toilet covers, or $640 each.[5]

President Ronald Reagan held a televised news conference in 1987, where he held up one of these shrouds and stated: "We didn't buy any $600 toilet seat. We bought a $600 molded plastic cover for the entire toilet system." A Pentagon spokesman, Glenn Flood stated, "The original price we were charged was $640, not just for a toilet seat, but for the large molded plastic assembly covering the entire seat, tank and full toilet assembly. The seat itself cost $9 and some cents.… The supplier charged too much, and we had the amount corrected."[6] The president of Lockheed at the time, Lawrence Kitchen, adjusted the price to $100 each and returned $29,165. "This action is intended to put to rest an artificial issue," Kitchen stated.[5]