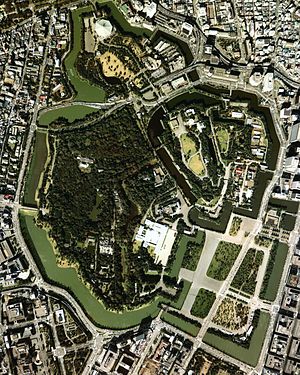 Aerial photograph of Imperial Palace of Japan in 1979

The Tokyo Imperial Palace (皇居, Kōkyo?, literally "Imperial Residence") is the primary residence of the Emperor of Japan. It is a large park-like area located in the Chiyoda ward of Tokyo and contains buildings including the main palace (宮殿, Kyūden?), the private residences of the Imperial Family, an archive, museums and administrative offices.

It is built on the site of the old Edo Castle. The total area including the gardens is 3.41 square kilometres (1.32 sq mi). During the height of the 1980s Japanese property bubble, the palace grounds were valued by some to be more than the value of all of the real estate in the state of California.[1][2]

After the capitulation of the shogunate and the Meiji Restoration, the inhabitants, including the Shogun Tokugawa Yoshinobu, were required to vacate the premises of the Edo Castle. Leaving the Kyoto Imperial Palace on 26 November 1868, the Emperor arrived at the Edo Castle, made it to his new residence and renamed it to Tōkei Castle (東京城, Tōkei-jō?). At this time Tōkyō had also been called Tōkei. He left for Kyōto again, and after coming back on 9 May 1869 it was renamed to Imperial Castle (皇城, Kōjō?).[3]

Previous fires had destroyed the Honmaru area containing the old donjon (which itself burned in the 1657 Meireki fire). On the night of 5 May 1873, a fire consumed the Nishinomaru Palace (formerly the shogun's residence), and the new imperial Palace Castle (宮城, Kyūjō?) was constructed on the site in 1888.

A non-profit "Rebuilding Edo-jo Association" (NPO江戸城再建) was founded in 2004 with the aim of a historically correct reconstruction of at least the main donjon. In March 2013 Naotaka Kotake, head of the group, said that "the capital city needs a symbolic building", and that the group planned to collect donations and signatures on a petition in support of rebuilding the tower. A reconstruction blueprint had been made based on old documents. The Imperial Household Agency at the time had not indicated whether it would support the project.[4][5] 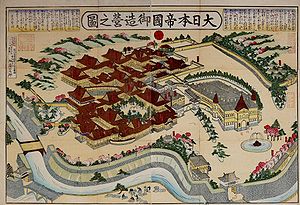 The Kyūden (宮殿?) shortly after its completion in the late 1800s 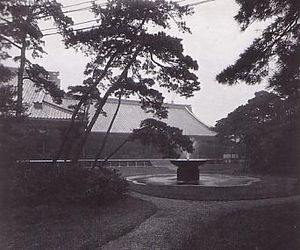 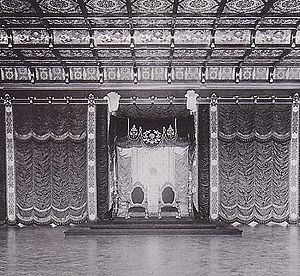 In the Meiji era, most structures from the Edo Castle disappeared. Some were cleared to make way for other buildings while others were destroyed by earthquakes and fire. For example, the wooden double bridges (二重橋, Nijūbashi?) over the moat were replaced with stone and iron bridges. The buildings of the Imperial Palace constructed in the Meiji era were constructed of wood. Their design employed traditional Japanese architecture in their exterior appearance while the interiors were an eclectic mixture of then-fashionable Japanese and European elements. The ceilings of the grand chambers were coffered with Japanese elements; however, Western chairs, tables and heavy curtains furnished the spaces. The floors of the public rooms had parquets or carpets while the residential spaces used traditional tatami mats.

The main audience hall was the central part of the palace. It was the largest building in the compound. Guests were received there for public events. The floor space was more than 223 tsubo or approximately 737.25 m2 (7,935.7 sq ft). In the interior, the coffered ceiling was traditional Japanese-style, while the floor was parquetry. The roof was styled similarly to the Kyoto Imperial Palace, but was covered with (fireproof) copper plates rather than Japanese cypress shingles.

In the late Taishō and early Shōwa eras, more concrete buildings were added, such as the headquarters of the Imperial Household Ministry and the Privy Council. These structures exhibited only token Japanese elements.

From 1888 to 1948, the compound was called Palace Castle (宮城, Kyūjō?). On the night of 25 May 1945, most structures of the Imperial Palace were destroyed in the Allied firebombing raid on Tokyo. In August 1945, in the closing days of World War II, Emperor Showa (Hirohito) met with his Privy Council and made decisions culminating in the capitulation of Japan at an underground air-raid shelter on the palace grounds referred to as His Majesty's Library (御文庫附属室, Obunko Fuzokushitsu?).[6]

Due to the large-scale destruction of the Meiji-era palace, a new main palace hall (Kyūden (宮殿?)) and residences were constructed on the western portion of the site in the 1960s. The area was renamed Imperial Residence (皇居, Kōkyo?) in 1948 while the eastern part was renamed East Garden (東御苑, Higashi-Gyoen?) and became a public park in 1968.

The present Imperial Palace encompasses the retrenchments of the former Edo Castle. The modern palace Kyūden (宮殿?) designed for various imperial court functions and receptions is located in the old Nishinomaru section of the palace grounds. On a much more modest scale, the residence of the current Emperor and empress is located in the Fukiage Gardens. Designed by Japanese architect Shōzō Uchii the modern residence was completed in 1993.[7]

Except for Imperial Household Agency and the East Gardens, the palace is generally closed to the public. Each New Year (January 2) and Emperor's Birthday, the public is permitted to enter through the Nakamon (inner gate) where they gather in the Kyuden Totei Plaza in front of the Chowaden Hall. The Imperial Family appears on the balcony before the crowd and the Emperor normally gives a short speech greeting and thanking the visitors and wishing them good health and blessings.

Every year a poetry convention called Utakai Hajime is held at the palace on January 1.[8]

The old Honmaru, Ninomaru, and Sannomaru compounds now comprise the East Gardens, an area with public access containing administrative and other public buildings.

The Kitanomaru Park is located to the north and is the former northern enceinte of Edo Castle. It is a public park and is the site of Nippon Budokan Hall. To the south are the outer gardens of the Imperial Palace (Kōkyo-gaien), which are also a public park. 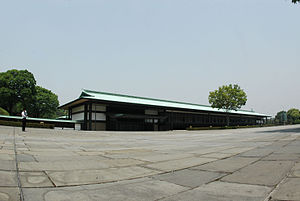 Chōwaden Reception Hall, the largest structure of the palace 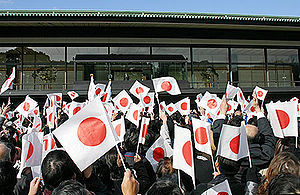 Emperor Akihito greets the public at the Chōwaden Reception Hall on his birthday, 23 December 2004.

The Imperial Palace (Kyūden (宮殿?)) and the headquarters of the Imperial Household Agency are located in the former Nishinomaru enceinte (West Citadel) of the Edo Castle.[9]

The main buildings of the palace grounds, including the (Kyūden (宮殿?)) main palace, home of the liaison conference of the Imperial General Headquarters, were severely damaged by the fire of May 1945. Today's palace consists of multiple modern structures that are interconnected. The palace complex was finished in 1968 and was constructed of steel-framed reinforced concrete structures produced domestically, with two stories above ground and one story below. The buildings of the Imperial Palace were constructed by the Takenaka Corporation in a modernist style with clear Japanese architectural references such as the large, gabled hipped roof, columns and beams.

The complex consists of seven wings, including:

The (Kyūden (宮殿?)) is used for both receiving state guests and holding official state ceremonies and functions. The Matsu-no-Ma (Pine Chamber) is the throne room. The Emperor gives audiences to the Prime Minister in this room, as well as appointing or dismissing ambassadors and Ministers of State. It is also the room where the Prime Minister and Chief Justice is appointed to office. 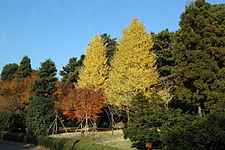 The Fukiage Garden has carried the name since the Edo period and is used as the residential area for the Imperial Family.

The palace precincts include the Three Palace Sanctuaries (Kyūchū-sanden, 宮中三殿). Parts of the Imperial Regalia of Japan are kept here and the sanctuary plays a religious role in imperial enthronements and weddings. 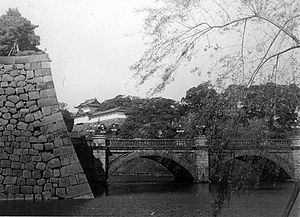 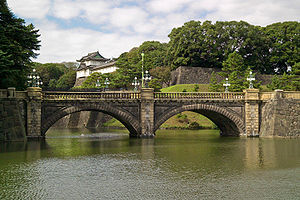 The Palace has changed little between 1945 (upper picture) to 2005 (lower picture) as shown by the Seimon Ishibashi bridge, which leads to the main gate

The East Garden is where most of the administrative buildings for the palace are located and encompasses the former Honmaru and Ninomaru areas of Edo Castle, a total of 210,000 m2 (2,300,000 sq ft). Located on the grounds of the East Garden is the Imperial Tokagakudo Music Hall, the Music Department of the Board of Ceremonies of the Imperial Household, the Archives and Mausolea Department Imperial Household Agency, structures for the guards such as the Saineikan dojo, and the Museum of the Imperial Collections.

Several structures that were added since the Meiji period were removed over time to allow construction of the East Garden. In 1932, the kuretake-ryō was built as a dormitory for imperial princesses, however this building was removed prior to the construction of the present gardens. Other buildings such as stables and housing were removed to create the East Garden in its present configuration.

Construction work began in 1961 with a new pond in the Ninomaru, as well as the repair and restoration of various keeps and structures from the Edo period. On 30 May 1963, the area was declared by the Japanese government a "Special Historic Relic" under the Cultural Properties Protection Law.

The Tōkagakudō (Peach Blossom Music Hall,桃華楽堂) is located to the east of the former main donjon of Edo Castle in the Honmaru. This music hall was built in commemoration of the 60th birthday of Empress Kojun on 6 March 1963. The ferro-concrete building covers a total area of 1,254 m2 (13,500 sq ft). The hall is octagon-shaped and each of its eight outer walls is decorated with differently designed mosaic tiles. Construction began in August 1964 and was completed in February 1966.

Symbolic trees representing each prefecture in Japan are planted in the northwestern corner of Ninomaru enceinte. Such trees have been donated from each prefecture and there are total of 260, covering 30 varieties. 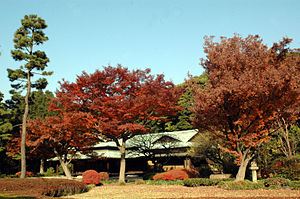 The Suwa no Chaya (諏訪の茶屋) is a teahouse that was located in the Fukiage Garden during the Edo period. It was moved to Akasaka Palace after the Meiji restoration but was reconstructed in its original location in 1912.

It was moved to its present location during the construction of the East Garden.

The Kitanomaru Park is located to the north and is the former northern enceinte of Edo Castle. It is a public park and is the site of Nippon Budokan Hall.

To the south are the large outer gardens of the Imperial Palace, which are also a public park and contain a bronze monument to Kusunoki Masashige (楠木正成?).