Tolpuddle /ˈtɒlpʌdəl/ is a village and civil parish in the county of Dorset in southern England. It is situated in the Piddle valley 8 miles (13 km) east of Dorchester, the county town, and 12 miles (19 km) west of Poole. Dorset County Council's 2013 estimate of the population of the parish is 420.[1]

The village is famous as the home of the Tolpuddle Martyrs who were sentenced to be transported to Australia after they formed a trade union in 1833. A row of cottages, housing agricultural workers and a museum, and a row of seated statues commemorate the martyrs. The annual Tolpuddle Martyrs festival is held in the village in the third weekend of July. An ancient sycamore tree on the village green, known as the Martyrs' Tree, is said to be the place where the Martyrs swore their oath. It is cared for by the National Trust.[2]

Tolpuddle used to have a petrol station, village shop and post office, but these have closed. It has a public house, The Martyrs Inn, which is owned by nearby Athelhampton House, a Tudor house open to the public approximately 1 mile (1.6 km) to the west.

Tolpuddle parish church is dedicated to St John the Evangelist and dates from the 13th century.[3]

In 1999 the A35 trunk road, which cuts through south Dorset, was moved to bypass the village. 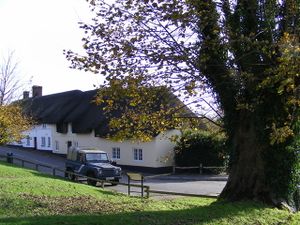 The Green at Tolpuddle. It is believed that whilst sitting under this sycamore tree, the six Tolpuddle Martyrs agreed to form a trade union