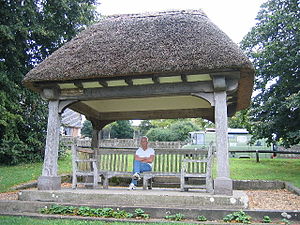 The shelter erected as a memorial in 1934.

The Tolpuddle Martyrs were a group of 19th century Dorset agricultural labourers who were arrested for and convicted of swearing a secret oath as members of the Friendly Society of Agricultural Labourers. The rules of the society show it was clearly structured as a friendly society and operated as a trade-specific benefit society. At the time, friendly societies had strong elements of what are now considered to be the predominant role of trade unions. The Tolpuddle Martyrs were subsequently sentenced to penal transportation to Australia.[1]

Before 1824/25 the Combination Acts had outlawed "combining" or organising to gain better working conditions. In 1824/25 these Acts were repealed, so trade unions were no longer illegal. In 1832, the year of a Reform Act which extended the vote in England but did not grant universal suffrage, six men from Tolpuddle in Dorset founded the Friendly Society of Agricultural Labourers to protest against the gradual lowering of agricultural wages in the 1830s caused by the surplus supply of labour in an era when mechanisation was beginning to have an impact on agricultural working practices for the first time. This was a particular problem in remote parts of southern England, such as Dorset, where farmers did not have to compete with the higher wages paid to workers in London and in the northern towns experiencing the Industrial Revolution. They refused to work for less than 10 shillings a week, although by this time wages had been reduced to seven shillings a week and were due to be further reduced to six shillings. The society, led by George Loveless, a Methodist local preacher, met in the house of Thomas Standfield.[2]

Groups such as the Tolpuddle Martyrs would often use a skeleton painting as part of their initiation process. The newest member would be blindfolded and made to swear a secret oath of allegiance. The blindfold would then be removed and they would be presented with the skeleton painting. This was to warn them of their own mortality but also to remind them of what happens to those who break their promises. An example of this skeleton painting is currently on display at the People's History Museum, Manchester.[3]

In 1834 James Frampton, a local landowner and magistrate, wrote to the Home Secretary Lord Melbourne to complain about the union. Melbourne recommended invoking the Unlawful Oaths Act 1797, an obscure law promulgated in 1797 in response to the Spithead and Nore mutinies, which prohibited the swearing of secret oaths. James Brine, James Hammett, George Loveless, George's brother James Loveless, George's brother in-law Thomas Standfield, and Thomas's son John Standfield were arrested and tried before Sir John Williams in R v Lovelass and Others.[4] They were found guilty and transported to Australia.[5][6]

When sentenced to seven years' penal transportation, George Loveless wrote on a scrap of paper lines from the union hymn The Gathering of the Unions:[7][8][9]

God is our guide! from field, from wave,
From plough, from anvil, and from loom;
We come, our country's rights to save,
And speak a tyrant faction's doom:
We raise the watch-word liberty;
We will, we will, we will be free!

James Loveless, the two Standfields, Hammett and Brine sailed on the Surry to Sydney, where they arrived on 17 August 1834. George Loveless was delayed due to illness and left later on the William Metcalf to Van Diemen's Land, reaching Hobart on 4 September.[10]

In England they became popular heroes and 800,000 signatures were collected for their release. Their supporters organised a political march, one of the first successful marches in the UK, and all were pardoned, on condition of good conduct, in March 1836, with the support of Lord John Russell, who had recently become Home Secretary.[11]

When the pardon reached George Loveless some delay was caused in his leaving due to no word from his wife as to whether she was to join him in Van Dieman’s Land. On 23 December 1836 a letter was received to the effect that she was not coming and Loveless sailed from Van Dieman’s Land on 30 January 1837, arrived in England on 13 June 1837.[12][13]

In New South Wales, there were delays in obtaining an early sailing due to tardiness in the authorities confirming good conduct with the convicts' assignees and then getting them released from their assignments. James Loveless, Thomas and John Stanfield, and James Brine departed Sydney on the John Barry on 11 September 1837, reaching Plymouth on 17 March 1838, one of the departure points for convict transport ships. A plaque next to the Mayflower Steps in Plymouth's historical Barbican area commemorates the arrival. Although due to depart with the others, James Hammett was unfortunately detained in Windsor, charged with an assault, while the others left the colony. It was not until March 1839 that he sailed, arriving in England in August 1839.[13][12][14]

The Lovelesses, Standfields and Brine first settled on farms near Chipping Ongar, Essex, then moved to London, Ontario, where there is now a monument in their honour and an affordable housing co-op/trade union complex named after them. George Loveless is buried in Siloam Cemetery on Fanshawe Park Road East in London, Ontario. James Brine is buried in St. Marys Cemetery, St. Marys, Ontario. He died in 1902, having lived in nearby Blanshard Township since 1868. Hammett remained in Tolpuddle and died in the Dorchester workhouse in 1891.[12]

The Tolpuddle Martyrs Museum, located in Tolpuddle, Dorset, features displays and interactive exhibits about the Martyrs and their impact on trade unionism.[15]

A monument was erected in their honour in Tolpuddle in 1934, and a sculpture of the martyrs, made in 2001, stands in the village in front of the Tolpuddle Martyrs Museum.[16] 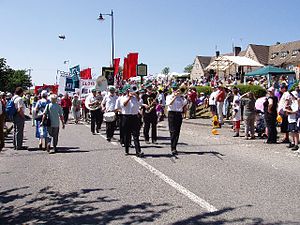 The Tolpuddle Martyrs festival is held annually in Tolpuddle, usually in the third week of July, organised by the Trades Union Congress (TUC) featuring a parade of banners from many trade unions, a memorial service, speeches and music. Recent festivals have featured speakers such as Tony Benn and musicians such as Billy Bragg and local folk singers including Graham Moore, as well as others from all around the world.[17]

The courtroom where the martyrs were tried, which has been little altered in 200 years, in Dorchester's Shire Hall, is being preserved as part of a heritage scheme.[18]

The story of Tolpuddle has enriched the history of trade unionism, but the significance of the Tolpuddle Martyrs continues to be debated since Sidney and Beatrice Webb wrote the History of Trade Unionism (1894) and continues with such works as Dr Bob James's Craft Trade or Mystery (2001).[19][20]

There are streets named in their honour in:

In 1984, a mural was created in Edward Square, off Copenhagen Street, Islington, to commemorate the gathering of people organised by the Central Committee of the Metropolitan Trade Unions to demonstrate against the penal transportation of the Tolpuddle Martyrs to Australia. The mural was painted by artist David Bangs.[21]

Comrades was a 1986 British historical drama film directed by Bill Douglas and starring an ensemble cast including James Fox, Robert Stephens and Vanessa Redgrave. Through the pictures of a travelling lanternist, it depicts the story of the Tolpuddle Martyrs.[22]