From Peninsula War to Ferdinand VII

Zumalacárregui was born at Ormaiztegi in Gipuzkoa, a Basque province in Spain, on 29 December 1788. His father, Francisco Antonio de Zumalacárregui, was a lawyer who possessed some property, and the son was articled to a solicitor.

When the Peninsular War began with a French invasion of Spain in 1808 he enlisted at Zaragoza. He served in the 1808 First Siege of Zaragoza, at the Battle of Tudela, and during the 1809 Second Siege of Zaragoza until he was taken prisoner in a sortie. He succeeded in escaping and in reaching his family in Navarre. For a short time he served with Gaspar de Jáuregui, another Gipuzkoan known as "The Shepherd" (Basque: Artzaia), one of the minor guerrilla leaders.

But Zumalacárregui, who was noted for his grave and silent disposition and his strong religious principles, disliked the disorderly life of the guerrillas, and when regular forces were organized in the north he entered the 1st battalion of Gipuzkoa as an officer. During the remainder of the war he served in the regular army. In 1812, his brother Miguel Antonio de Zumalacárregui was present in Cádiz at the moment, going on to be elected chief deputy of Gipuzkoa. Tomas was then sent with dispatches to the Regency at Cádiz, and received his commission as captain. In that rank he was present at the battle of San Marcial foist of August 1813. After the restoration of Ferdinand VII he continued in the army, and is said to have made a careful study of the theory of war.[1]

Zumalacárregui had no sympathy with the liberal principles which were spreading in Spain, and became noted as what was called a servil or strong Royalist. He attracted no attention at headquarters, and was still a captain when the Revolution of 1820 broke out and the Trienio Liberal was established. His brother officers, whose leanings were liberal, denounced him to the revolutionary government, and asked that he might be removed. The recommendation was not acted on, but Zumalacárregui knew of it, and laid up the offence in his mind. Finding that he was suspected (probably with truth) of an intention to bring the soldiers over to the royalist side, he escaped to France.

In 1823 he returned as an officer in one of the royalist regiments which had been organized on French soil by the consent of the government. He was now known as a thoroughly trustworthy servant of the royalty, but he was too proud to be a courtier. For some years he was employed in bringing regiments which the government distrusted to order. He became lieutenant-colonel in 1825 and colonel in 1829. In 1832 he was named military governor of Ferrol, Galicia. Before King Ferdinand VII died in 1833, Zumalacárregui was marked out as a natural supporter of the traditionalist party, which favoured the king's brother, Infante Carlos, Count of Molina.[1]

The proclamation of the king's daughter Isabel as heiress was almost the occasion of an armed conflict between him and the naval authorities at Ferrol, who were partisans of the liberal and so-called "constitutional" cause. He was put on half pay by the new authorities and ordered to live under police observation at Pamplona in Navarre. 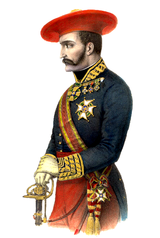 When the Carlist uprising began on the death of Ferdinand VII, he is said to have held back because he knew that the first leaders would be politicians and talkers. He did not take the field till the Carlist cause appeared to be at a very low ebb, and until he had received a commission from Don Carlos as commander-in-chief in Navarre.

The whole force under his orders when he escaped from Pamplona on the night of 29 October 1833, and took the command next day in the Araquil Valley, was a few hundred ill-armed and dispirited guerrilleros. In a few months Zumalacárregui had organized the Carlist forces into a regular army. The difficulty he found in obtaining supplies was very great, for the coast towns and notably Bilbao support the "Cristino" (liberal) cause. It was mainly by captures from the government troops that he equipped his forces. He gradually obtained full possession of the Southern Basque Country, outside of the fortresses, which he had not the means to besiege.[1] He organized the forces known as aduaneros and the Guías de Navarra. His chief bodyguard, and later biographer, was Charles Frederick Henningsen.[citation needed]

Whether as a guerrilla leader, or as a general conducting regular war in the mountains, he proved unconquerable. He won the battles of Alsasua, Alegría de Álava, and Venta de Echavarri, for example, by employing guerrilla tactics.

By July 1834 he had made it safe for Don Carlos to join his headquarters. Zumalacárregui was by then strongly envied by the courtiers that surrounded the pretender, as well as by other military officers. Besides, Don Carlos was a somewhat naïve and easily suggestible man, and Zumalacárregui had therefore to drag behind him the whole weight of the distrust and intrigues of the court. Yet by the beginning of June 1835 he had made the Carlist cause triumphant to the north of the Ebro, and had formed an army of more than 30,000 men, of much better quality than the constitutional forces. He won the battle of Artaza (20–22 April 1835).

If Zumalacárregui had been allowed to follow his own plans, which were to concentrate his forces and march on Madrid, firstly seizing Logroño (La Rioja, Castile), he might well have put Don Carlos in possession of the capital. But the court was eager to obtain command of a seaport, because they thought this will facilitate the official recognition of Don Carlos as the legitimate heir to the Spanish Throne by other European courts. Thus, Zumalacárregui was ordered to besiege Bilbao. He obeyed reluctantly, and on the 14th of June 1835 was wounded by a musket bullet in the calf of the leg near the Basilica of Begoña.[1] The wound was trifling and would probably have been cured with ease, but Zumalacárregui decided to employ a famous Gipuzkoan quack called "Petriquillo", whom he trusted.[2] Petriquillo proceeded to remove the bullet from Zumalacárregui's leg, provoking a great loss of blood and probably an infection.[citation needed] Don Carlos had insisted on sending his own physicians, but they hesitated about the best prognosis to follow, losing precious time and failing to stop Petriquillo from trying his "procedure" (he acted when they were not present) and in their hands the general died on 24 June 1835, not without suspicion of poison and after Petriquillo had hastily left the place.

Zumalacárregui was a fine type of the old royalist and religious principles of his people.[1] The Carlist forces under his command were repeatedly refused quarter by the government's forces (which for years didn't recognize them as legitimate combatants). The increasing ferocity of the war, substantiated in routine executions of Carlist soldiers and officers, convinced him of the necessity of a similar retaliation against the liberal forces. Zumalacárregui, however, would later sign the Lord Eliot Convention, shortly before his own death, which aimed to end the indiscriminate executions by firing squad of prisoners of both sides.

The most trustful and complete account of Zumalacarregui's carlist campaign can be found in Juan Antonio de Zaratiegui y Celigüeta's "Vida y hechos de Don Tomás de Zumalacárregui". Zaratiegui was his personal assistant, secretary and friend throughout the war, and also himself an important carlist military officer. Accounts of Zumalacárregui include The Most Striking Events of a Twelvemonth Campaign with Zumalacarregui in Navarre and the Basque Provinces, by Charles Frederick Henningsen (London, 1836) as well as a chapbook called "Vida política y militar de Don Tomás Zumalacárregui". Of Zumalacárregui, Henningsen writes:

Now that Zumalacarregui's memory must descend, whatever be the issue of the contest, as an heir-loom to all classes of his countrymen, as long as the Spanish language endures, and that his name must be mingled in the songs of the peasantry with that of the Cid, it would be superfluous to say that he was no ordinary man; but, although, on the roll of those who have acquired a title to immortality, by the immense share he had in the early successes of the Royalist army, justice is scarcely done him. It is doubtless that it required the iron frame and indomitable spirit of the mountaineers he commanded, to battle so long against man, want, and the elements.

Zumalacárregui in the Episodios nacionales

Zumalacárregui is the main character of an eponymous Episodio nacional, by Benito Pérez Galdós. He is portrayed as an intelligent man and an excellent strategist who fights for what he believes in.[4]