From Infogalactic: the planetary knowledge core
Jump to: navigation, search
For the English socialist and trade union organiser, see Tom Maguire (socialist). For the Fenian Thomas Maguire who was convicted in 1867 with the Manchester Martyrs, see Manchester Martyrs. 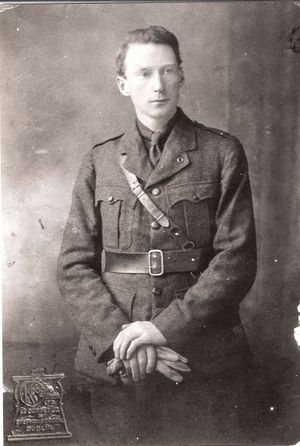 Tom Maguire (28 March 1892 – 5 July 1993) was an Irish republican who held the rank of commandant-general in the Western Command of the Irish Republican Army (IRA) and led the South Mayo flying column.[1]

In May 1921, Maguire led an ambush on a Royal Irish Constabulary patrol in Tourmakeady, County Mayo, killing four. Maguire's flying column then made for the Partry Mountains. One account claimed that the column were surrounded by over 700 soldiers and policemen guided by aeroplanes. Maguire was wounded and his adjutant killed, but the column managed to escape with no further casualties. British casualties were not revealed but were believed to have been high. Some recent research has raised the possibility that fewer than forty British soldiers were in the vicinity and that Maguire's column was forced to abandon their weapons with only one British officer wounded.[2]

Maguire was involved in numerous other engagements including the Kilfall ambush.[3]

At the 1921 election to Dáil Éireann, Maguire was returned unopposed as Teachta Dála (TD) for Mayo South–Roscommon South as a Sinn Féin candidate. He opposed the Anglo-Irish Treaty, and apart from saying "Níl" ("No" in English) when the vote was called, did not participate in any substantial way in the Dáil treaty debates. He was returned unopposed at the 1922 general election.[4] At the 1923 general election, Maguire faced a contest and succeeded in securing the second of five seats in the Mayo South constituency, winning 5,712 votes (17.8%).[5][6] He was a member of the anti-Treaty IRA executive which commanded rebel troops during the Irish Civil War. Maguire was captured by the National Army and was told that he would be executed, but his life was spared. While in prison his brother, Sean Maguire, aged 17, was executed by the government.[7]

Maguire remained a TD until 1927. He had initially indicated a willingness to contest the June 1927 general election as a Sinn Féin candidate but withdrew after the IRA threatened to court-martial any member under IRA General Army Order 28, which forbade its members from standing in elections. (Despite this ban, IRA officers Seán Farrell (Leitrim–Sligo) and John Madden (Mayo North) contested the election, the latter successfully).

Maguire subsequently drifted out of the IRA. In 1932, a Mayo IRA officer reported that Maguire, now firmly aligned with Sinn Féin, refused to call on men to join the IRA when speaking at republican commemorations. When challenged on this, Maguire claimed that, as the IRA "were no longer the same as they used to be", he disagreed with the organisation.

In December 1938, Maguire was one of a group of seven people, who had been elected to the Second Dáil in 1921, who met with the IRA Army Council under Seán Russell. At this meeting, the seven signed over what they contended was the authority of the Government of Dáil Éireann to the Army Council. Henceforth, the IRA Army Council perceived itself to be the legitimate government of the Irish Republic and, on this basis, the IRA and Sinn Féin justified their rejection of the states of the Republic of Ireland and Northern Ireland and political abstentionism from their parliamentary institutions. According to J. Bowyer Bell, in The Secret Army, "With the possible exception of Tom Maguire, who went along, the Dáil members felt that the IRA request gave them the moral recognition so long denied by all factions and that their conditional devolution of power would in turn give the IRA the moral basis for the impending campaign" of 1939–45.[8]

When the majority of IRA and Sinn Féin decided to abandon abstentionism in the 1969–70 split, Ruairí Ó Brádaigh and Dáithí Ó Conaill sought and secured Maguire's recognition of the Provisional IRA as the legitimate successor to the 1938 Army Council. Of the seven 1938 signatories, Maguire was the only one still alive.[fn 1]

Likewise, in the aftermath of the 1986 split in the Republican Movement, both the Provisional IRA and the Continuity IRA sought Maguire's support.[9] Maguire signed a statement which was issued posthumously in 1996. In it, he conferred legitimacy on the Army Council of the Continuity IRA (who provided a firing party at Maguire's funeral in 1993). In The Irish Troubles, J. Bowyer Bell describes Maguire's opinion in 1986, "abstentionism was a basic tenet of republicanism, a moral issue of principle. Abstentionism gave the movement legitimacy, the right to wage war, to speak for a Republic all but established in the hearts of the people."[10]

Although the 1938 conferring has been crucial to the ideology of republican legitimatists, for all intents and purposes its validity was rejected by the overwhelming majority of the Irish people.[citation needed]

Maguire was the last survivor of the rump legitimist Second Dáil of 1938. By 1986, when he was the only surviving member of the 1921–22 Second Dail, he objected strongly to the intention of Sinn Fein and the Provisional IRA to recognise "the partition parliament of Leinster House".[11]