From Infogalactic: the planetary knowledge core
Jump to: navigation, search
For other people of the same name, see Thomas Roberts (disambiguation).

Thomas William "Tom" Roberts (9 March 1856 – 14 September 1931) was a prominent Australian artist and a key member of the Heidelberg School, many of whose paintings are in the collection of the National Gallery of Australia. 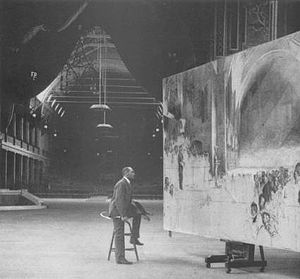 Born in Dorchester, Dorset, England, where his parents were newspaper editors, Roberts migrated with his family to Australia in 1869 to live with relatives. Settling in Collingwood, a suburb of Melbourne, Victoria, he worked as a photographer's assistant through the 1870s while studying art at night under Louis Buvelot and befriending others who were to become prominent artists, notably Frederick McCubbin. He returned to England for three years of full-time art study at the Royal Academy Schools from 1881 to 1884.

Through the 1880s and 1890s he worked in Victoria, in his studio at the famous studio complex of Grosvenor Chambers at 9 Collins Street in Melbourne, and at a number of artists' camps and visits around the colony. He married 35-year-old Elizabeth (Lillie) Williamson in 1896, and they had a son, Caleb. Many of his most famous paintings come from this period. Roberts was an expert maker of picture frames, and during the period 1903–1914, when he painted relatively little, much of his income apparently came from this work.

He spent World War I in England assisting at a hospital. In Australia, he built a house at Kallista, near Melbourne.

Elizabeth died in January 1928, and Tom remarried, to Jean Boyes, in August 1928. He died in 1931 of cancer in Kallista near Melbourne. He is buried near Longford, Tasmania. 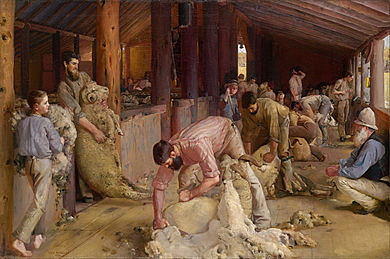 Roberts painted a considerable number of fine oil landscapes and portraits, some painted at artist camps with his friend McCubbin. Perhaps the most famous in his time were two large paintings, Shearing the Rams,now displayed in the National Gallery of Victoria and The Big Picture, displayed in Parliament House, Canberra.

The Big Picture, a depiction of the first sitting of the Parliament of Australia, was an enormous work, very notable for the event depicted as well as the quality of Roberts' work.

Shearing the Rams (1888-1890), based on a visit to a sheep station at Brocklesby in southern New South Wales, depicted the wool industry that had been Australia's first export industry and a staple of rural life. At the time it was exhibited, it was criticized because many critics did not feel that it fitted the definition of 'high art'. However, since the wool industry was Australia's greatest export industry at the time, it was a theme with which many Australian people could identify and shows Roberts putting his training to work translating "the classical statuary into the brawny workers of the shearing shed".[1] Shearing would probably have been much messier than shown in the image, although shearing rules at the time did expect the sheep to be carried as shown in the picture.[2] 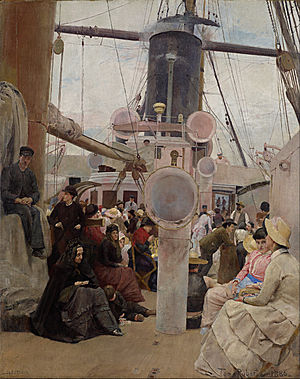 Roberts made many other paintings showing country people working, with a similar image of the shearing sheds in The Golden Fleece, a drover racing after sheep breaking away from the flock in A break away!, and with men chopping trees in Wood splitters. Many of Roberts' paintings were landscapes or ideas done on small canvases that he did very quickly, such as his exhibits at the famous "9 by 5 Impression Exhibition" in Melbourne, "9 by 5" referring to the size in inches of the cigar box lids which most of the paintings were done on. Roberts had more works on display in this exhibition than anyone else.

Holiday sketch at Coogee is a celebration of the white sand and blue water of this popular promenade and bathing site, especially the intensity of Sydney sunlight,[3] painted when Roberts was in Sydney. The Camp, Sirius Cove, painted in 1899, depicts the artists camp.[4] 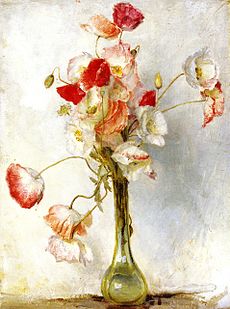 Roberts' time in Sydney proved extremely influential on the young artist, and Conder followed him to Melbourne later that year to join the group of artist friends at Heidelberg. An autumn morning, Milson's Point during a visit to Sydney in early 1888.[5] The painting depicts the northern shores of the harbour that were only accessible by ferry at this time. A contemporary reviewer attributed the murky colour of the air to the pollution as a result of burning coal.[citation needed] Later, Roberts himself lived and painted in this area whilst staying in Mosman at Curlew Camp, Sirius Cove, during the early 1890s.

Roberts' life was dramatised in the 1985 mini series One Summer Again.