Tomislav Nikolić (Serbian Cyrillic: Томислав Николић, Serbian pronunciation: [tǒmislaʋ nǐkolit͡ɕ]; born 15 February 1952) is a Serbian politician who has been the President of Serbia since 31 May 2012. He is also the founder of the Serbian Progressive Party, and he led the party until his election as President. In the 2012 presidential election, he was elected to a five-year term as President in a second round of voting.

Born in Kragujevac, Nikolić was a long-time member and MP of the Serbian Radical Party (SRS). He served as the Deputy Prime Minister of Serbia from 1998 to 1999 and Deputy Prime Minister of FR Yugoslavia in the coalition government from 1999 to 2000. Nikolić was the Radical Party's deputy leader from 2003, and he briefly served as the President of the National Assembly of Serbia in 2007. In 2008 he resigned following a disagreement with party leader Vojislav Šešelj regarding Serbia's relations with the European Union, as Nikolić became in favor of Serbia's accession to the EU, a move that was staunchly opposed by Šešelj and his faction.[1] Nikolić formed the Serbian Progressive Party, which several SRS members joined.

Nikolić ran for the President of Yugoslavia in the 2000 elections and placed third. He also ran four times for President of Serbia (in 2003, 2004, 2008 elections, and 2012 elections). In 2003 he garnered the most votes, but the election was cancelled due to low turnout, while in 2004 and 2008 he placed second behind Boris Tadić. In 2012, he won the runoff against Tadić to become President of Serbia.[citation needed]

Tomislav Nikolić was born in Kragujevac. His father, Radomir, was a labourer, and his mother, Živadinka (née Đoković), was a housewife. In his youth, he trained in athletics. He completed secondary technical school in Kragujevac. His first employment was as a cemetery supervisor.[2][3] In 1971 he began working with the building construction company "Žegrap", and in 1978 he worked for the company "22 December” in Kragujevac as head of the Investment and Maintenance Department. He was also Technical Director of the Utility Services company in Kragujevac.[2] He and his wife Dragica (née Ninković) have two sons.[2]

In 2000, he began the first of several runs for the presidency of Serbia. In the FR Yugoslavia presidential election of 2000, he finished in third place behind Vojislav Koštunica and Slobodan Milošević. He then ran in the 2003 Serbian presidential election, in which garnered the most votes in the first round (46.23%), ahead of Dragoljub Mićunović, but the results were invalidated due to a low turnout of only 38.8%. Nikolić made yet another bid for presidency in the 2004 presidential election.[5] In the first round, he received 30.1% of the vote and Boris Tadić received 27.3%. In the second round held on 27 June, Nikolić lost to Tadić by 53.7% to 45.4%. On 23 February 2003 he became the deputy leader of the party, after Vojislav Šešelj went voluntarily to the ICTY. During his leadership of the party, Nikolić favoured pushing the party towards focusing on more economic and social issues such as poverty and unemployment, rather than militant nationalism.[citation needed]

Nikolić was elected Speaker of Parliament on 8 May 2007, defeating Milena Milošević of the Democratic Party by 142 to 99 votes out of 244 members of Parliament. The Democratic Party of Serbia endorsed him.[6] Hajredin Kuci of the Democratic Party of Kosovo, Ylli Hoxha of the Reformist Party ORA, and the Prime Minister of Kosovo Agim Çeku condemned the election of Nikolić as "counterproductive and dangerous for Kosovo".[7] On 9 May, Nikolić met with Russian Ambassador Aleksandr Alekseyev and gave a speech to Parliament in which he advocated making Serbia part of a Belarus-Russia superstate, saying that together they would "stand up against the hegemony of America and the European Union".[8] 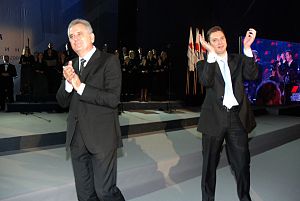 Tomislav Nikolić and Aleksandar Vučić at the founding convention of SNS

On 5 February 2011, in front of the National Assembly, Nikolić and his political supporters – Milanka Karić (Strength of Serbia Movement, Velimir Ilić (New Serbia), Aleksandar Vulin (Movement of Socialists) and Aleksandar Vučić organized a protest demanding early parliamentary elections. According to an official Serbian police report there were around 55,000 people present. On 16 April 2011 Nikolić organized a larger protest with the same request. He also started a thirst and hunger strike that morning and later moved to the national parliament. He stated that his goal was to force the then-Serbian government (led by Boris Tadić) to hold early parliamentary elections.[19] On 17 April Tadić came to visit Nikolić in the latter's parliamentary chambers. Tadić advised Nikolić to stop striking. Nikolić's condition worsened and he was taken to a private hospital. Serbia's media regularly reported on his condition. That same night his arterial tension was high (150/100 mmHg)[20] but he refused to seek intravenous therapy or medication.[20] When he realized that his hunger strike would not bring about the desired outcome, Nikolić stepped down, citing Easter.[citation needed]

Nikolić led the party in the 2012 parliamentary election, and he ran for president in the 2012 presidential election. His slogan was Let's Get Serbia Moving (Serbian: Покренимо Србију, Pokrenimo Srbiju). During the campaign, the issue of his education was raised, as the opposition claimed that Nikolić obtained his master's degree under dubious circumstances in a private school. Nikolić responded by suing the daily newspapers Blic and Kurir, demanding 4 million euros as compensation.[21]

On 6 May 2012, Nikolić lost the first round with 25.05% of the vote. Nikolić and incumbent Boris Tadić, who garnered 25.31% of the vote, faced off against each other in a runoff election on 20 May. Nikolić won, receiving 49.4% of the vote in a tally of 70% of the polling stations. Boris Tadić, his rival in the elections, congratulated him on the victory, and stated that he hoped that Serbia would continue its progress under Nikolić.[22]

Nikolić resigned as leader of the Serbian Progressive Party on 24 May 2012,[23] and simultaneously quit his membership in the party, citing desire to be a president of all citizens of Serbia.[24][25]

In late September 2013, the Belgrade gay pride parade was banned by the Serbian police for the third consecutive year following violent threats issued by right-wing groups and requests by the Serbian Orthodox Church.[26] Prior to the parade, Dačić released a statement in which he said that homosexual behaviour was "abnormal" and that homosexuals in Serbia needed to "respect the wishes of the majority of the population" if the "majority's wish was for the parade to not take place."[27] Nikolić subsequently issued a statement calling for "work on the organisation of next year's parade to begin immediately."[28] 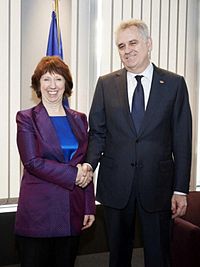 Tomislav Nikolić meeting Catherine Ashton, High Representative of the Union for Foreign Affairs and Security Policy for the European Union, in Brussels following a meeting with Atifete Jahjaga in February 2013.

Nikolić was inaugurated as the President of Serbia on 11 June 2012. Stefan Fuelle, the EU's enlargement commissioner, was the highest-ranking official to attend and many ambassadors from other countries were also present. Leaders of Croatia, Bosnia and Herzegovina, Slovenia and Macedonia boycotted the inauguration due to his denial of the genocide at Srebrenica and claims about Vukovar.[29][30][31]

During the 1990s and until 2008, Nikolić repeatedly called for the creation of a Greater Serbia.[32][33] Nikolić told a Zagreb paper in 2004 that the boundaries of Greater Serbia along the Virovitica-Karlovac-Karlobag line were not part of any imperialistic politics, but would always remain a "dream" for him and other Radical leaders.[34] He also said that he would not have diplomatic relations with Croatia because they are "occupying Serbian land".[35] In 2007, Nikolić stated that the basis of political action in the Serbian Radical Party was the unification of Republika Srpska, Montenegro, and the Republic of Serbian Krajina with Serbia in a single Balkan state.[36] But a few days before the 2012 elections, Nikolić told the Frankfurter Allgemeine Zeitung in an interview that the territorial integrity of neighbouring countries cannot be questioned and that his former opinions were no longer valid.[37] When asked about this change of position, he quoted a French philosopher that said "only a fool does not change his opinion."[38]

In a remark about Serbian Prime Minister Zoran Đinđić's injured leg, Nikolić said on 28 February 2003: "If anyone of you, in the following month or two, sees Zoran Đinđić somewhere, tell him that Tito also had a problem with a leg before his death".[39] Less than two weeks later Đinđić was assassinated in Belgrade. Nikolić later apologized for his statement by saying that he would have never said that had he known what would happen. In contrast to Đinđić, Nikolić repeatedly refused to apologize for stating "I don't regret that Slavko Curuvija was murdered”. (Journalist Slavko Ćuruvija was murdered on 11 April 1999 in front of the door of his building.)[40][41]

In 2012 Nikolić was accused of buying a master's degree from the Faculty of Management in Novi Sad without attending a single class or exam. The allegation was based on that his diploma had no stamp and that no other students recalled having seen him attend classes or exams.[42][43]

In a May 2012 interview, Nikolić was quoted by Frankfurter Allgemeine Zeitung to have said that ″Vukovar was a Serb city and Croats have nothing to go back to there″.[44] Croatian President Ivo Josipović criticized Nikolić for this statement and conditioned future cooperation on Nikolić's withdrawal of the statement.[45]

The following day Nikolić's office issued a statement saying that Nikolić never made any such statement and called it a ″treacherous lie″.[46] However, Michael Martens, a journalist at Frankfurter Allgemeine Zeitung subsequently published the audio recording showing that Nikolić had indeed made that statement.[47]

On 2 June 2012, Nikolić stated on Montenegrin television that "there was no genocide in Srebrenica. In Srebrenica, grave war crimes were committed by some Serbs who should be found, prosecuted and punished. [...] It is very difficult to indict someone and prove before a court that an event qualifies as genocide." Nikolić stated that he would not attend the annual commemoration of the Srebrenica massacre: "Don't always ask the Serbian president if he is going to Srebrenica, my predecessor was there and paid tribute. Why should every president do the same?"[48]

Bakir Izetbegović, a member of Bosnia and Herzegovina's presidency, said Nikolic's comments insulted the survivors. He elaborated "the denial of genocide in Srebrenica will not pave the way for co-operation and reconciliation in the region, but on the contrary may cause fresh misunderstandings and tensions. "[48] Catherine Ashton, foreign policy chief of the European Union, condemned his comments and stated that "the EU strongly rejects any intention to rewrite history."[49] The United States State Department deplored Nikolić's statement and considered them unfounded and counterproductive.[50]

On 25 April 2013, Nikolić apologised for crimes committed by any individual in the name of Serbia, and, in particular, for crimes committed in Srebrenica.[51][52][53] The apology came after Nikolić was criticised during the presidential election in 2012 for saying that 'there was no genocide in Srebrenica', although this had been acknowledged by his predecessor, Tadić.[51] However, the news was not fully accepted[clarification needed] in the media in Bosnia and Herzegovina and Nikolić was said to have not recognised the massacre of Srebrenica as genocide.[52]