From Infogalactic: the planetary knowledge core
Jump to: navigation, search
This article is about the financial instrument. For the digital pensions company, see Tontine Trust. For the racehorse, see Tontine (horse). For the Australian pillow manufacturer, see Tontine Group. 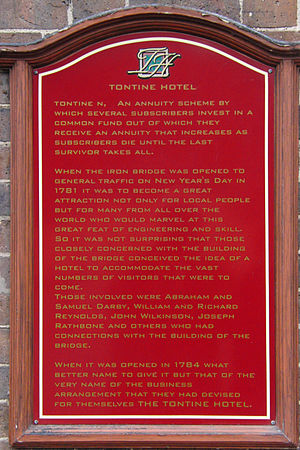 A tontine (/ˈtɒntaɪn, -iːn, ˌtɒnˈtiːn/) is an investment plan for raising capital, devised in the 17th century and relatively widespread in the 18th and 19th centuries.

It enables subscribers to share the risk of living a long life by combining features of a group annuity with a kind of mortality lottery. Each subscriber pays an agreed sum into the fund and thereafter receives a periodical payout. As members die, their payout entitlements devolve to the other participants, and so the value of each continuing payout increases. On the death of the last member, the scheme is wound up.[1]

Tontines are regulated in Europe under the Directive 2002/83/EC of the European Parliament[2] and are still common in France.[3]

The Pan-European Pension Regulation passed by the European Commission in 2019 also contains provisions that specifically permit next-generation pension products that abide by the "tontine principle" to be offered in the 27 EU member states.[4]

Questionable practices by U.S. life insurers in 1906 led to the Armstrong Investigation in the United States restricting some forms of tontines. Nevertheless, in March 2017, The New York Times reported that tontines were getting fresh consideration as a way for people to get steady retirement income.[5]

The investment plan is named after Neapolitan banker Lorenzo de Tonti, who is popularly credited with inventing it in France in 1653. He more probably merely modified existing Italian investment schemes;[6] while another precursor was a proposal put to the Senate of Lisbon by Nicolas Bourey in 1641.[7] Tonti put his proposal to the French royal government, but after consideration it was rejected by the Parlement de Paris.[8]

The first true tontine was therefore organised in the city of Kampen in the Netherlands in October 1670, and was soon followed by three other cities.[9] The French finally established a state tontine in 1689[8] (though it was not described by that name because Tonti had died in disgrace, about five years earlier). The English government organised a tontine in 1693.[10] Nine further government tontines were organised in France down to 1759; four more in Britain down to 1789; and others in the Netherlands and some of the German states. Those in Britain were not fully subscribed, and in general the British schemes tended to be less popular and successful than their continental counterparts.[11]

By the end of the 18th century, the tontine had fallen out of favour as a revenue-raising instrument with governments, but smaller-scale and less formal tontines continued to be arranged between individuals or to raise funds for specific projects throughout the 19th century, and, in modified form, to the present day.[5]

Each investor pays a sum into the tontine. Each investor then receives annual interest on the capital invested. As each investor dies, his or her share is reallocated among the surviving investors. This process continues until the death of the final investor, when the scheme is wound up. Each subscriber receives only interest; the capital is never paid back.[12]

In most 18th- and 19th-century schemes, parties 2 to 4 were the same individuals; but in a significant minority of schemes each initial subscriber-shareholder was permitted to invest in the name of another party (generally one of his or her own children), who would inherit that share on the subscriber's death.[12]

Because younger nominees clearly had a longer life expectancy, the 17th- and 18th-century tontines were normally divided into several "classes" by age (typically in bands of 5, 7 or 10 years): each class effectively formed a separate tontine, with the shares of deceased members devolving to fellow-nominees within the same class.[12]

In a later variation, the capital devolves upon the last survivor, thus dissolving the trust and potentially making the survivor very wealthy.[citation needed] This version has often provided the plot device for mysteries and detective stories.

Financial inventions were patentable under French law from January 1791 until September 1792. In June 1792 a patent was issued to inventor F. P. Dousset for a new type of tontine in combination with a lottery.[13]

Louis XIV first made use of tontines in 1689 to fund military operations when he could not otherwise raise the money. The initial subscribers each put in 300 livres and, unlike most later schemes, this one was run honestly; the last survivor, a widow named Charlotte Barbier, who died in 1726 at the age of 96, received 73,000 livres in her last payment.[14][15][16] The English government first issued tontines in 1693 to fund a war against France, part of the Nine Years' War.[10][16]

Tontines soon caused financial problems for their issuing governments, as the organisers tended to underestimate the longevity of the population. At first, tontine holders included men and women of all ages. However, by the mid-18th century, investors were beginning to understand how to game the system, and it became increasingly common to buy tontine shares for young children, especially for girls around the age of 5 (since girls lived longer than boys, and by which age they were less at risk of infant mortality). This created the possibility of significant returns for the shareholders, with significant losses for the organizers. As a result, tontine schemes were eventually abandoned, and by the mid-1850s tontines had been replaced by other investment vehicles, such as "penny policies", a predecessor of the 20th-century pension scheme.[citation needed]

A property development tontine, The Victoria Park Company, was at the heart of the notable case of Foss v Harbottle in mid-19th-century England.[citation needed] 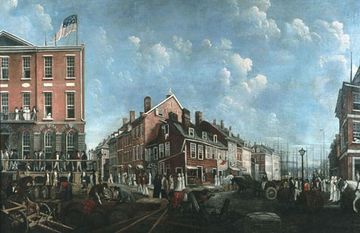 Tontines were often used to raise funds for private or public works projects.[17] These sometimes contained the word "tontine" in their name.

Tontines became associated with life insurance in the United States in 1868 when Henry Baldwin Hyde of the Equitable Life Assurance Society introduced them as a means of selling more life insurance and meeting the demands of competition. Over the next four decades, the Equitable and its imitators sold approximately 9 million policies – two-thirds of the nation's outstanding insurance contracts. During the Panic of 1873 many life insurance companies went out of business as deteriorating financial conditions created solvency problems: those that survived had all offered tontines.[23] However, the contracts included an obligation to maintain monthly payments, and as a result spawned large numbers of policy owners whose life savings were wiped out by a single missed payment. The profits produced by the tontines' deferred payout structures proved tempting for the issuers – especially the profligate James Hyde. As the funds in the investment account accumulated, they found their way into directors' and agents' pockets, and also into the hands of judges and legislators, who reciprocated with prejudicial judgments and laws.[24]

Finally, in 1905, the Armstrong Investigation was set up to enquire into the selling of tontines. It resulted in the banning of the continued sale of any tontines which contained toxic clauses for consumers.[25] In essence, these toxic versions of tontine pensions were effectively (though not literally) outlawed in response to corrupt insurance company management.[26]

When Equitable Life Assurance was establishing its business in Australia in the 1880s, an actuary of the Australian Mutual Provident Society criticised tontine insurance, calling it "an immoral contract" which "put a premium on murder".[27] In New Zealand at the time, another of the chief critics of tontines had been the government, which also issued its own insurance.[28]

Until recently, the First Life Directive of the European Union specified tontines as a class of insurance business however the new Pan-European Pension legislation coming into force in August 2020 specifically paves the way for other types of financial service providers to create new pension products that abide by the "tontine principle".[4]

In most places in the United States using tontines to raise capital or obtain lifetime income is consistently upheld as being legal; however, outdated legislation in two states has fostered the false perception that selling tontines in the broader U.S. is not legal.[29]

Tontine pensions in the 21st century

In 2015, John Barry Forman and Michael J. Sabin, using modern actuarial techniques to calculate fair transfer payments when participants are of different ages and have made different contributions, proposed a new structure of pension plan on the tontine model, through which large employers could provide retirement income for their employees. They argued that tontine pensions would have two major advantages over traditional pensions, as they would always be fully funded, and the plan sponsor would not be required to bear the investment and actuarial risks.[30] Similar arguments were put forward in the same year by Moshe Milevsky.[31] In March 2017, The New York Times reported that tontines were getting fresh consideration as a way for people to get steady retirement income.[5]

In 2017, Dean McClelland, Richard Fullmer and Jon Matonis and others published a whitepaper to deliver secure low cost Tontine Pensions based loosely upon the Forman, Sabin and Milevsky format under the brand Tontine Trust.[32] In 2018, Richard K. Fullmer and Michael J. Sabin expanded on the ideas presented in Forman and Sabin (2015) by showing that participants in an actuarially fair tontine need not be confined to a common investment portfolio or to a common payout method. Their paper introduced the concept of individual tontine accounts (ITAs), which they envisioned as complementary to individual retirement account (IRAs).[33]

In 2019, the CFA Institute Research Foundation published a research brief titled Tontines: A Practitioner's Guide to Mortality-Pooled Investments noting that "the study of fair tontine design is a specialty all its own—one that has emerged only recently."[34] Fullmer and Sabin showed that it is possible to engineer payouts within a tontine structure that are immune to interest rate and reinvestment risk.[35]

Several new pension architectures have been designed or deployed which partially or fully utilise the tontine risk-sharing structure including:

Variant uses of the term

In French-speaking cultures, particularly in developing countries, the meaning of the term "tontine" has broadened to encompass a wider range of semi-formal group savings and microcredit schemes. The crucial difference between these and tontines in the traditional sense is that benefits do not depend on the deaths of other members.

In the UK during the mid-20th century, the term was applied to communal Christmas saving schemes, with participants making regular payments of an agreed sum through the year, which would be withdrawn shortly before Christmas to fund gifts and festivities.[37]

As a type of rotating savings and credit association (ROSCA), tontines are well established as a savings instrument in central Africa, and in this case function as savings clubs in which each member makes regular payments and is lent the kitty in turn. They are wound up after each cycle of loans.[38] In West Africa, "tontines" – often consisting of mainly women – are an example of economic, social and cultural solidarity.[39]

Informal group savings and loan associations are also traditional in many east Asian societies, and under the name of tontines are found in Cambodia, and among emigrant Cambodian communities.[40]

In Singapore, the Chit Funds Act of 1971[41] defines the application of legislation to the operation of chit funds, which were also known colloquially as tontines but which operated on a different principle more commonly known as a ROSCA (Rotating Savings and Credit Association).

In Malaysia, chit funds are primarily known as "kootu funds", which again are ROSCAs and which are defined under the Kootu Funds (Prohibition) Act 1971 as "...a scheme or arrangement variously known as a kootu, cheetu, chit fund, hwei, tontine or otherwise whereby the participants subscribe periodically or otherwise to a common fund and such common fund is put up for sale or payment to the participants by auction, tender, bid, ballot or otherwise..." [42]

Tontines have been featured as plot devices in many stories, movies and television programs, including: