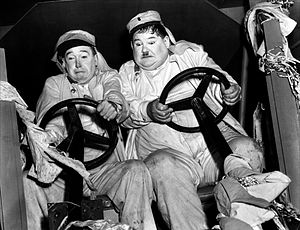 Oliver Hardy (right) sported a toothbrush moustache. Its heyday of popularity was from about 1900 to 1945.

The toothbrush moustache is a moustache style, shaved at the edges, except for three to five centimeters above the centre of the lip. The sides of the moustache are vertical rather than tapered. The style first became popular in the United States in the late 19th century, from where it spread to Germany and elsewhere, reaching a height of popularity in the inter-war years before becoming unfashionable after World War II due to its association with Adolf Hitler. Other names for the moustache include the Hitler, Charlie Chaplin, 1/3, philtrum, postage stamp, and soul stache. 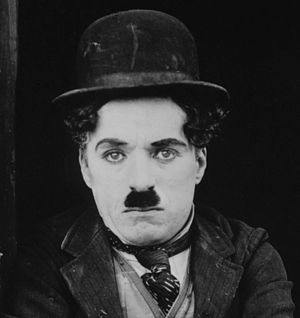 Charlie Chaplin thought the moustache gave him a comical appearance.

The style originally became popular in the late 19th century in the United States.[1] It was a neat, uniform, low-maintenance style that echoed the standardization and uniformity brought on by industrialization, in contrast to the more flamboyant moustaches typical of the 19th century such as the Imperial, Walrus, Handlebar, Horseshoe, and Pencil[1]

Charlie Chaplin was one of the most famous wearers of the toothbrush moustache, first adopting it sometime after 1914 for his Mack Sennett silent comedies.[1] In a 1933 interview, Chaplin said he added the moustache to his costume because it had a comical appearance and was small enough so as not to hide his expression.[2] Adolf Hitler was a fan of Chaplin, but "there is no evidence (though some speculation) that Hitler modeled his 'stache on [Charlie Chaplin]."[3] Chaplin took advantage of the noted similarity between his on-screen appearance and that of Hitler, such as in his 1940 film The Great Dictator, where he wore the moustache as part of two new characters that parodied Hitler.[1][4] 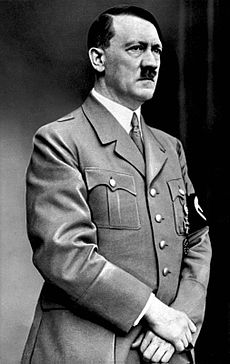 Adolf Hitler's appearance was so defined by the toothbrush moustache that the style became largely unfashionable after World War II.

The style was introduced in Germany in the late 19th century by visiting Americans.[1] Prior to the toothbrush, the most popular style was called the Kaiser moustache, perfumed and turned up at the ends, as worn by the Wilhelm II, German Emperor.[1][4] By 1907 enough Germans were wearing the new trimmed down and simple toothbrush moustache to elicit notice by The New York Times under the headline "'TOOTHBRUSH' MUSTACHE; German Women Resent Its Usurpation of the 'Kaiserbart'".[1][5] The toothbrush was taken up by German folk hero Hans Koeppen in the famous 1908 New York to Paris Race, cementing its popularity among young gentry.[1][6] Koeppen was described as "Six-feet in height, slim, and athletic, with a toothbrush mustache characteristic of his class, he looks the ideal type of the young Prussian guardsman."[6] By the end of World War I even some of the German royals were sporting the toothbrush; Crown Prince Wilhelm can be seen with a toothbrush moustache in a 1918 photograph that shows him about to be sent into exile.[1]

Hitler originally wore the Kaiser moustache, as evidenced by photographs of him as a soldier during World War I.[7] There is no agreement as to what year Hitler first adopted the toothbrush.[1] Alexander Moritz Frey, who served with Hitler during World War I, said Hitler wore the toothbrush in the trenches after he was ordered to trim his moustache to facilitate the wearing of a gas mask.[1][8] Cultural historian Ron Rosenbaum instead says Hitler didn't wear it until late 1919.[3] Despite the photographic evidence of his much larger moustache during the First World War, Hitler's sister-in-law, Bridget Hitler, said she was responsible for Hitler's toothbrush.[1] Bridget claimed that Adolf spent a "lost winter" at her home in Liverpool in 1912–13.[1] The two quarreled a lot, mostly, she said, because she could not stand his unruly Kaiser moustache. He cut it, as she says in her memoirs, but that in doing so, as in most things, he went "too far".[1][9] Bridget Hitler's story is considered by most scholars to be fiction designed to cash in on her brother-in-law's notoriety.[10] 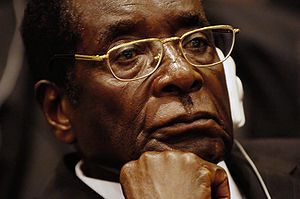 Robert Mugabe's extreme variant narrows it to the philtrum only.

After World War II, the style fell from favour in much of the world due to its strong association with Hitler earning it another name: the "Hitler moustache".[1]

Artist Steve Ditko's original design for fictional character J. Jonah Jameson, supporting character in the Spider-Man comics, sported a toothbrush mustache, and most appearances of Jameson since his creation have maintained the style or a variant thereof (though notably, actor J.K. Simmons' portrayal of Jameson in the Spider-Man films of the early 2000s featured a pencil moustache instead).

Ron Mael of the Los Angeles-based rock band Sparks maintained a toothbrush-mustache throughout most of the 1970s and 80s. Upon achieving mainstream success in the United Kingdom in 1974 with the song "This Town Ain't Big Enough for Both of Us", The Economist noted that "a whole generation switched on Top of the Pops, saw Ron Mael's moustache, and ran out of the room, crying, 'Mum! Dad! Hitler's playing the piano on 'Top of the Pops'!'"[11]

In 2009, British comedian Richard Herring, while sporting a toothbrush moustache, created a stand-up show titled Hitler Moustache, to see if he "could reclaim the toothbrush moustache for comedy—it was Chaplin's first, then Hitler ruined it."[12] The show also discusses broader issues, such as fascism and the British National Party.[4][13]

In May 2010, former basketball star Michael Jordan appeared in a Hanes commercial wearing a toothbrush moustache.[14] Reaction from the press and public was unfavorable.[15] Jordan's friend Charles Barkley said, "I have got to admit that I don't know what the hell he was thinking and I don't know what Hanes was thinking. I mean it is just stupid, it is just bad, plain and simple."[15] Jordan has not been seen with it since.

In China, a version of this moustache is viewed as a stereotype of Japanese people, especially of Japanese soldiers from the Second World War.[citation needed] This style is depicted in The Adventures of Tintin comic album The Blue Lotus. An extreme variant of the toothbrush moustache narrows it to the philtrum only; Robert Mugabe is noted for this style, as was Soviet politician Vasil Mzhavanadze.

Notable people with a toothbrush moustache