In topography, prominence[lower-alpha 1] characterizes the height of a mountain or hill's summit by the vertical distance between it and the lowest contour line encircling with no higher summit. It is a measure of the independence of a summit. A peak's key col is a unique point on this contour line and the parent peak is some higher mountain, selected according to various objective criteria.

File:Relative-height2.svg
Figure 1. Vertical arrows show the topographic prominence of three peaks on an island. The dotted horizontal lines show the lowest contours that do not encircle higher peaks. 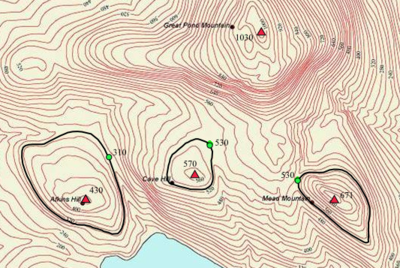 By convention, the prominence of Mount Everest, the Earth's highest mountain, is taken to equal the elevation of its summit above sea level. Apart from this special case, there are several equivalent definitions:

Prominence is interesting to some mountaineers because it is an objective measurement that is strongly correlated with the subjective significance of a summit. Peaks with low prominences are either subsidiary tops of some higher summit or relatively insignificant independent summits. Peaks with high prominences tend to be the highest points around and are likely to have extraordinary views.

Many lists of mountains take topographic prominence as a criterion for inclusion, or cutoff. John and Anne Nuttall's The Mountains of England and Wales uses a cutoff of 15 m (about 50 ft), and Alan Dawson's list of Marilyns uses 150 m (about 500 ft). (Dawson's list and the term "Marilyn" are limited to the British Isles.) In the contiguous United States, the famous list of "fourteeners" (14,000 foot / 4268 m peaks) uses a cutoff of 300 ft / 91 m (with some exceptions). Also in the U.S., 2000 feet (610 m) of prominence has become an informal threshold that signifies that a peak has major stature. Lists with a high topographic prominence cutoff tend to favour isolated peaks or those that are the highest point of their massif; a low value, such as the Nuttalls', results in a list with many summits that may be viewed by some as insignificant.

While the use of prominence as a cutoff to form a list of peaks ranked by elevation is standard, and is the most common use of the concept, it is also possible to use prominence as a mountain measure in itself. This generates lists of peaks ranked by prominence, which are qualitatively different from lists ranked by elevation. Such lists tend to emphasize isolated high peaks, such as range or island high points and stratovolcanoes. One advantage of a prominence-ranked list is that it needs no cutoff, since a peak with high prominence is automatically an independent peak.

It is common to define a peak's parent as a particular peak in the higher terrain connected to the peak by the key col. If there are many higher peaks there are various ways of defining which one is the parent, not necessarily based on geological or geomorphological factors. The "parent" relationship defines a hierarchy which defines some peaks as subpeaks of others. For example, in Figure 1, the middle peak is a subpeak of the right peak, which is in turn a subpeak of the left peak, which is the highest point on its landmass. In that example, there is no controversy over the hierarchy; in practice, there are different definitions of parent. These different definitions follow.

A special case occurs for the highest point on an oceanic island or continent. Some sources define no parent in this case; others treat Mount Everest as the parent of every such peak with the ocean as the "key col".

Also called prominence island parentage, this is the most mathematically natural definition, and is defined as follows. In figure 2 the key col of peak A is at the meeting place of two closed contours, one encircling A (and no higher peaks) and the other containing at least one higher peak. The encirclement parent of A is the highest peak that is inside this other contour. In terms of the rising-sea model, the two contours together bound an island, with two pieces connected by an isthmus at the key col. The encirclement parent is the highest point on this entire island.

For example, the encirclement parent of Mont Blanc, the highest peak in the Alps, is Mount Everest. Mont Blanc's key col is a piece of low ground near Lake Onega in northwestern Russia (at 113 m elevation), on the divide between lands draining into the Baltic and Caspian Seas. This is the meeting place of two 113 m contours, one of them encircling Mont Blanc; the other contour encircles Mount Everest. This example demonstrates that the encirclement parent can be very far away from the peak in question when the key col is low. 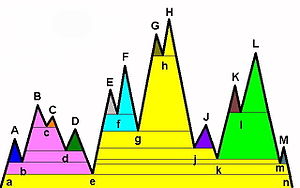 Figure 3. Diagram of a mountain range showing peaks and cols, from which mountain parentage and prominences can be determined.

This means that, while simple to define, the encirclement parent often does not satisfy the intuitive requirement that the parent peak should be close to the child peak. For example, one common use of the concept of parent is to make clear the location of a peak. If we say that Peak A has Mont Blanc for a parent, we would expect to find Peak A somewhere close to Mont Blanc. This is not always the case for the various concepts of parent, and is least likely to be the case for encirclement parentage.

The encirclement parent is the highest possible parent for a peak; all other definitions pick out a (possibly different) peak on the combined island, a "closer" peak than the encirclement parent (if there is one), which is still "better" than the peak in question. The differences lie in what criteria are used to define "closer" and "better."

The (prominence) parent peak of peak A can be found by dividing the island or region in question into territories, by tracing the runoff[clarification needed] from the key col of every peak that is more prominent than peak A. The parent is the peak whose territory peak A is in.

For hills with low prominence in Britain, a definition of 'parent Marilyn' is sometimes used to classify low hills. This is found by dividing the region of Britain in question into territories, one for each Marilyn ("Marilyn" being a British term for a hill with a prominence of at least 150 m). The parent Marilyn is the Marilyn whose territory the hill's summit is in. If the hill is on an island (in Britain) whose highest point is less than 150m, it has no parent Marilyn.

Prominence parentage is the only definition used in the British Isles because encirclement parentage breaks down when the key col approaches sea level. The encirclement parent of almost any small hill in a low-lying coastal area of Great Britain would be Ben Nevis. Meanwhile, 'height' parentage (see below) is not used because there is no obvious choice of cutoff.

This choice of method might at first seem arbitrary, but it provides every hill with a clear and unambiguous parent peak that is taller and more prominent than the hill itself, while also being connected to it (via ridge lines). The parent of a low hill will also usually be nearby; this becomes less likely as the hill's height and prominence increase. Using prominence parentage, one may produce a 'hierarchy' of peaks going back to the highest point on the island. One such chain in the British Isles would read:

At each stage in the chain, both height and prominence increase.

The disadvantage of this concept is that it goes against the intuition that a parent peak should always be more significant than its child. However it can be used to build an entire lineage for a peak which contains a great deal of information about the peak's position.

To choose among possible parents, instead of choosing the closest possible parent, it is possible to choose the one which requires the least descent along the ridge.

In general, the analysis of parents and lineages is intimately linked to studying the topology of watersheds. 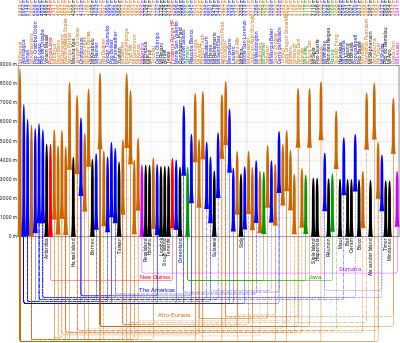 Chart showing relationships between the 100 peaks with highest prominence on Earth. (In the SVG version, hover over a peak to highlight its parent(s) and click it to view its article.)

The key col and parent peak are often close to the subpeak but this is not always the case, especially when the key col is relatively low. It is only with the advent of computer programs and geographical databases that thorough analysis has become possible.

While it is natural for Aconcagua to be the parent of Denali, since Denali is a major peak, consider the following situation: Peak A is a small hill on the coast of Alaska, with elevation 100 m and key col 50 m. Then the encirclement parent of Peak A is also Aconcagua, even though there will be many peaks closer to Peak A which are much higher and more prominent than Peak A (for example, Denali). This illustrates the disadvantage in using the encirclement parent.

A hill in a low-lying area like the Netherlands will often be a direct child of Mount Everest, with its prominence about the same as its height and its key col placed at or near the foot of the hill, well below, for instance, the 113-meter-high key col of Mont Blanc.

When the key col for a peak is close to the peak itself, prominence is easily computed by hand using a topographic map. However, when the key col is far away, or when one wants to calculate the prominence of many peaks at once, a computer is quite useful. Edward Earl has written a program called WinProm which can be used to make such calculations, based on a Digital Elevation Model. The underlying mathematical theory is called "Surface Network Modeling," and is closely related to Morse Theory.

A note about methodology: when using a topographic map to determine prominence, one often has to estimate the height of the key saddle (and sometimes, the height of the peak as well) based on the contour lines. Assume for simplicity that only the saddle elevation is uncertain. There are three simple choices: the pessimistic, or clean prominence, assumes that the saddle is as high as it can be, i.e., its elevation is that of the higher contour line nearest the saddle. This gives a lower bound on the possible prominence of the peak.[lower-alpha 3][2] Optimistic prominence assumes that the saddle is as low as possible, yielding an upper bound value for the prominence. Midrange or mean prominence uses the mean of these two values. Mean prominence is sometimes referred to as rise.[3]

Which methodology is used depends on the person doing the calculation and on the use to which the prominence is put. For example, if one is making a list of all peaks with at least 2,000 ft (610 m) of prominence, one would might use the optimistic prominence, to include all possible candidates (knowing that some of these could be dropped off the list by further, more accurate, measurements).

The following mental exercise may illustrate the meaning of topographic prominence. Imagine you are standing at the top of a mountain peak. Let an imaginary sea level slowly rise to the top of your peak. As the imaginary sea level rises, the mountain will shrink into an ever smaller island until the island disappears at your feet. Now let the imaginary sea level slowly drop. The island will reappear with your peak as its highest point. As the sea level continues to drop, the island will grow and merge with adjacent islands. At some point, unless you are atop Mount Everest, your island will touch another island with a higher summit.[lower-alpha 4] This point is called your peak’s key col, and the elevation rise from its key col to your summit is called its topographic prominence.