Topography of the Moon 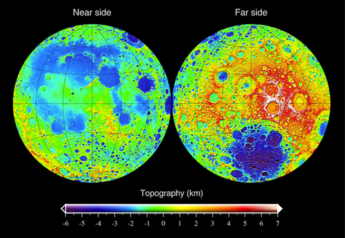 Topography of the Moon.

The topography of the Moon has been measured by the methods of laser altimetry and stereo image analysis, most recently from data obtained during the Clementine mission. The most visible topographic feature is the giant far side South Pole-Aitken basin, which possesses the lowest elevations of the Moon. The highest elevations are found just to the north-east of this basin, and it has been suggested that this area might represent thick ejecta deposits that were emplaced during an oblique South Pole-Aitken basin impact event. Other large impact basins, such as the maria Imbrium, Serenitatis, Crisium, Smythii, and Orientale, also possess regionally low elevations and elevated rims.

Another distinguishing feature of the Moon's shape is that the elevations are on average about 1.9 km higher on the far side than the near side. If it is assumed that the crust is in isostatic equilibrium, and that the density of the crust is everywhere the same, then the higher elevations would be associated with a thicker crust. Using gravity, topography and seismic data, the crust is thought to be on average about 50 ± 15 km thick, with the far-side crust being on average thicker than the near side by about 15 km.[1]