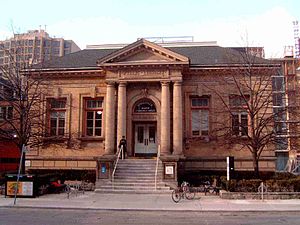 Yorkville Library, one of several Carnegie libraries in Toronto

In 1830, a library was established in the York Mechanics' Institute. In 1884, the collection became the Toronto Public Library. James Bain was the first chief librarian and he supplemented the collection with $15,000 worth of books purchased on a trip to England in late 1883.[10] Between 1907 and 1916, ten libraries were built with funds from the Andrew Carnegie Trust. Several of these Carnegie libraries continue to be used by the public library; one, the original Central Reference Library, is now the Koffler Student Centre at the University of Toronto.[11]

Henry Cummings Campbell was Chief Librarian of the Toronto Public Library from 1956 to 1978, and the first Chief Librarian to hold a professional library degree. He is credited for having contributed to the expansion of the library and its adaptation to an increasingly dynamic and multicultural city.[12]

Prior to the Amalgamation of Toronto in 1998, each of the former municipalities of Metropolitan Toronto operated their own public libraries.[13] They include: 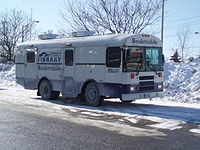 The TPL operates two Bookmobile buses (24' Blue Bird CS), targeting communities who lack easy access to a neighbourhood branch. There are 32 regular Bookmobile stops in Toronto, including one on Ward's Island.[24] The bookmobile concept was previously used in the library systems of the former municipalities of North York and Scarborough as well as in Toronto as far back as 1955.[citation needed]