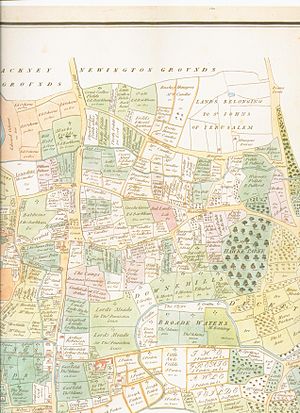 There has been a settlement at Tottenham for over a thousand years. It grew up along the old Roman road, Ermine Street (some of which is part of the present A10 road), and between High Cross and Tottenham Hale, the present Monument Way.

When the Domesday Book was compiled in 1086, about 70 families lived within the area of the manor, mostly labourers working for the Lord of the Manor. A humorous poem entitled the Tournament of Tottenham, written around 1400, describes a mock-battle between peasants vying for the reeve's daughter.

In 1894, Tottenham was made an urban district and on 27 September 1934 it became a municipal borough. As from 1 April 1965, the municipal borough formed part of the London Borough of Haringey.

From the Tudor period onwards, Tottenham became a popular recreation and leisure destination for wealthy Londoners. Henry VIII is known to have visited Bruce Castle and also hunted in Tottenham Wood. A rural Tottenham also featured in Izaak Walton's book The Compleat Angler, published in 1653.[6] The area became noted for its large Quaker population[7] and its schools (including Rowland Hill's at Bruce Castle.[8]) Tottenham remained a semi-rural and upper middle class area until the 1870s.

In late 1870, the Great Eastern Railway introduced special workman's trains and fares on its newly opened Enfield and Walthamstow branch lines. Tottenham's low-lying fields and market gardens were then rapidly transformed into cheap housing for the lower middle and working classes, who were able to commute cheaply to inner London. The workman's fare policy stimulated the relatively early development of the area into a London suburb.

An incident occurred on 23 January 1909, which was at the time known as the Tottenham Outrage.[9] Two armed robbers of Russian extraction held up the wages clerk of a rubber works in Chesnut Road. They made their getaway via Tottenham Marshes and fled across the Lea. On the opposite bank of the river they hijacked a Walthamstow Corporation tramcar, hotly pursued by the police on another tram. The hijacked tram was stopped but the robbers continued their flight on foot. After firing their weapons and killing two people, Ralph Joscelyne, aged 10, and PC William Tyler, they were eventually cornered by the police and shot themselves rather than be captured. Fourteen other people were wounded during the chase. The incident later became the subject of a silent film.[10]

During the Second World War Tottenham also became a target of the German air offensive against Britain. Bombs fell within the borough (Elmar Road) during the first air raid on London on 24 August 1940. The borough also received V-1 (four incidents) and V-2 hits, the last of which occurred on 15 March 1945. Wartime shortages led to the creation of Tottenham Pudding, a mixture of household waste food which was converted into feeding stuffs for pigs and poultry. The "pudding" was named by Queen Mary on a visit to Tottenham Refuse Works. Production continued into the post-war period, its demise coinciding with the merging of the borough into the new London Borough of Haringey. 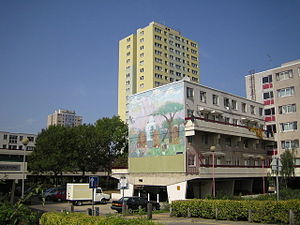 Broadwater Farm, the scene of rioting in 1985

In 1985, the Broadwater Farm housing estate in Tottenham was the scene of rioting between the police and local youths following the death of Cynthia Jarrett, a resident of Tottenham but who lived about a mile from the estate who died of heart failure after four policemen burst into her home. The response of the members of the black community in Tottenham and surrounding areas culminated in a riot beginning on Tottenham High Road and ending in the local Broadwater Farm Estate. One police officer, Keith Blakelock, was killed; 58 policemen and 24 other people were injured in the fighting. Two of the policemen were injured by gunshots during the riot, the first time that firearms had been used in that type of confrontation.

The Mecca Dance Hall was demolished in 2004 to make way for local housing. 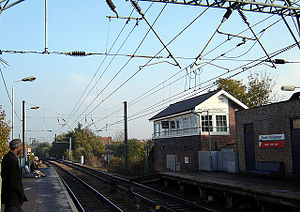 Tottenham is covered by the parliamentary constituency of Tottenham. The constituency was created in 1885 when the first MP was Joseph Howard of the Conservative Party, but was replaced by two constituencies: Tottenham North and Tottenham South in 1918. Since being reinstated in 1950 it has been predominantly represented by Labour Party candidates, with the exception of Alan Brown who defected to the Conservatives. The current MP is David Lammy who won a by-election in 2000 following the death of Bernie Grant.

Tottenham developed from a parish in Middlesex into an Urban sanitary district in 1875, after a local board of health had been established in 1850, then divided in 1888 so that Wood Green became a separate authority.[15] In 1894 Tottenham was reconstituted first as an urban district then as a municipal borough in 1934, before being subsumed into the larger London Borough of Haringey under the Local Government Act 1963.

Tottenham is a large area incorporating the N15 and N17 postcode areas.

To the west of the area are Broadwater Farm, the Tower Gardens Estate and Lordship Recreation Ground.

The eastern limit of Tottenham is the River Lea, and across the river the neighbouring district is Walthamstow in the London Borough of Waltham Forest

Tottenham has a multicultural population, with many ethnic groups inhabiting the area. It contains one of the largest and most significant populations of African-Caribbean people. These were among the earliest immigrant groups to settle in the area, starting the UK's Windrush era. Soon afterwards West African communities – notably the many Ghanaians – began to migrate into the area. Between 1980 and the present day there has been a slow immigration of Colombians, Congolese, Albanian, Kurdish, Turkish-Cypriot, Turkish, Somali, Irish, Portuguese, Polish and Zimbabweans populations.[citation needed] South Tottenham is reported to be the most ethnically-diverse area in Europe, with up to 300 languages being spoken by its residents.[16]

According to David Lammy MP, Tottenham has the highest unemployment rate in London and the 8th highest in the United Kingdom, and it has some of the highest poverty rates within the country.[17] There have also been major tensions between the African-Caribbean community and the police since (and before) the 1985 Broadwater Farm riot.

Tottenham has been one of the main hotspots for gangs and gun crime in the United Kingdom during the past three decades. This followed the rise of gangs and drug wars throughout the area, notably those involving the Tottenham Mandem gang and various gangs from Hackney and all of the areas surrounding Tottenham, and the emergence of an organised crime ring known as the Turkish mafia was said to have controlled more than 90% of the UK's heroin market.[18][19] 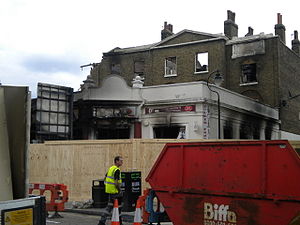 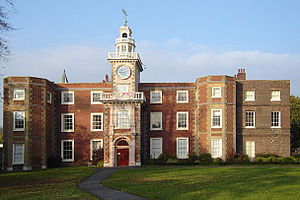 Two London Underground lines serve the Tottenham area.[25] The Piccadilly line, which opened in 1932, has one station Turnpike Lane, which was the first Underground station within the then Tottenham Borough boundaries.[25] The Victoria line, which opened in 1968, has its operating depot in Tottenham at Northumberland Park, as well as two stations, Seven Sisters and Tottenham Hale, in the area.[25] Stations Seven Sisters, Tottenham Hale, Bruce Grove, White Hart Lane and Northumberland Park also serve the area with train services provided by London Overground. London Overground trains serve South Tottenham station on a separate line.[25][26] 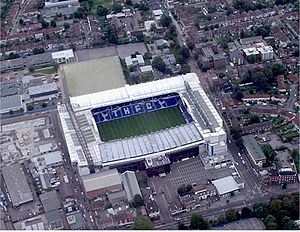 Tottenham is the home of Premier League football club Tottenham Hotspur. Tottenham have won the Football League twice, the FA Cup eight times, the UEFA Cup twice, the UEFA Cup Winners' Cup once and the Football League Cup, four times. In 2010, they qualified for the UEFA Champions League, Europe's elite competition for the first time.[27] The club's home ground is White Hart Lane, located on Park Lane, rather than the road of the same name. The ground is named after the White Hart Inn that it was built behind, and the nearest station to the ground.[citation needed] 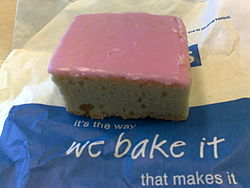 Tottenham cake is a sponge cake baked in large metal trays, covered either in pink icing or jam (and occasionally decorated with shredded desiccated coconut). Tottenham Cake "was originally sold by the baker Henry Chalkley, who was a Friend (or Quaker), at the price of one old penny, with smaller mis-shaped pieces sold for half an old penny." The pink colouring was derived from mulberries found growing at the Tottenham Friends burial ground.[28] Originally "a peculiar local invention"[29] of north London, the cake is now mass-produced by the Greggs chain of bakers.