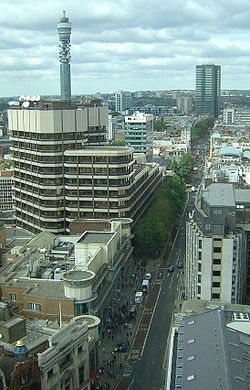 Tottenham Court Road looking north with BT Tower on the left. The building in the left foreground is Amoco House, an office block built in 1980. 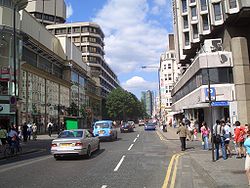 Tottenham Court Road is a major road in central London, running from St Giles Circus (the junction of Oxford Street and Charing Cross Road) north to Euston Road, in the London Borough of Camden near its boundary with the City of Westminster, a distance of about three-quarters of a mile (1.2 km). It has for many years been a one-way street: all three lanes are northbound only; the corresponding southbound traffic uses Gower Street which runs parallel to it to the east. It is generally regarded as marking the boundary between Bloomsbury to the east and Fitzrovia to the west, linking Somers Town to the north with Soho to the south.

The road is served by three stations on the London Underground—from south to north these are Tottenham Court Road, Goodge Street and Warren Street—and by numerous bus routes.

On 3 June 2014 Camden Council announced plans to reserve the road for buses and bicycles only, during daylight hours from Monday to Saturday. They claimed it will make the street safer and boost business ahead of the opening of a new Crossrail station in 2018. The current one-way system will be replaced with two-way traffic flows. Wider pavements, cycle lanes and safer pedestrian crossings will also be installed as part of the £26m plan.[1]

The manor house of Toten Hall, circa 1813

The area through which the road is built is mentioned in the Domesday Book as belonging to the Dean and Chapter of St Paul's Cathedral. In the time of Henry III (1216–1272), a manor house slightly north-west of what is now the corner of Tottenham Court Road and Euston Road belonged to one William de Tottenhall. In about the 15th century, the area was known variously as Totten, Totham, or Totting Hall. After changing hands several times, the manor was leased for 99 years to Queen Elizabeth, and it came to be popularly called Tottenham Court. In the following century, it appears to have become the property of the Fitzroys, who built Fitzroy Square on a part of the manor estate towards the end of the 18th century.[2] 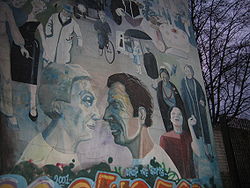 Tottenham Court Road is a significant shopping street, best known for its high concentration of consumer electronics shops, which range from shops specialising in cables and computer components to those dealing in package computers[clarification needed] and audio-video systems. Further north there are several furniture shops, including Habitat and Heals.

In the 1950s and 1960s, Tottenham Court Road and a few of the adjoining streets became well-known for stores selling World War II surplus radio and electronics equipment and all kinds of electro-mechanical and radio parts. Shops such as Proops Brothers and Z & I Aero Services lined both sides of the road at that time. By the 1960s they were also selling Japanese transistor radios, audio mixers and other electronic gadgets. Many British-made valve stereos were offered too. Lisle Street, on the north side of Leicester Square, was another place where a large variety of electronic surplus was available.

In recent years, the growth of e-commerce has reduced the importance of electronics retailing in the area.[3] Since 2008-09 a number of electronics stores have closed.

Opposite Habitat and Heals is a small public open space called Whitfield Gardens. On the side of a house is a painting, the "Fitzrovia Mural", which is about 20 metres (over 60 feet) high and shows many people at work and at leisure. It was painted in 1980 in a style resembling that of Diego Rivera. The mural has suffered from neglect and has been daubed with graffiti. There is a proposal to restore the mural after the current[when?] works to renovate the gardens are completed.[4][5] In 2005, 12 so-called "Our Glass" panels were erected in the gardens. Each is about five feet (1.5 m) high, with two sides showing a collage of people associated with the area, from satirical cartoonist Hogarth to the popular singer Boy George. There is a 13th panel showing an index of the people depicted. 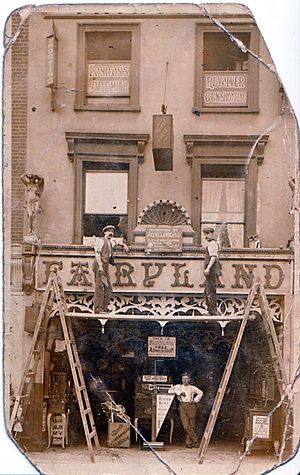 During the period leading up to and during the First World War, 92 Tottenham Court Road was the location of a shooting range called Fairyland. In 1909, Madan Lal Dhingra practised shooting here prior to his assassination of Sir William Hutt Curzon Wyllie.[6] Other residents of India House and members of Abhinav Bharat practised shooting at the range and rehearsed assassinations they planned to carry out. Also in 1909 it was reported in a police investigation that the range was being used by two Suffragettes in a possible conspiracy to assassinate Prime Minister Herbert Asquith.[7]

It was also where Donald Lesbini shot Alice Eliza Storey. R v Lesbini (1914) was a case that established in British, Canadian and Australian law that, with regard to voluntary manslaughter, a reasonable man always has reasonable powers of self-control and is never intoxicated.[8]

Pink Floyd played many early concerts at the UFO Club at 31 Tottenham Court Road where they were the house band.[9] The road is referred to in the lyrics of Underworld's Born Slippy .NUXX and Andrew Lloyd Webber's song Grizabella the Glamour Cat, from his musical Cats. The Kinks reference the road in their song Denmark Street.

From a 5 pound bet in William Hills,
To a Soho sex-shop dream,
From a fried egg in Valtaro's,
To a Tottenham Court Road ice cream,
We'll spew and lurch, get nicked and fixed,
On the way we'll kill and maim,
When you haven't got a penny, boys,
It's all the bloody same!

The road is featured briefly in Harry Potter and the Deathly Hallows when Harry and his friends were escaping from Death Eaters, by J.K. Rowling; The Woman in White by Wilkie Collins; Mrs. Dalloway by Virginia Woolf; Postern of Fate by Agatha Christie; Pygmalion by George Bernard Shaw and its musical adaptation, My Fair Lady; Saturday and Atonement by Ian McEwan; several Sherlock Holmes stories by Sir Arthur Conan Doyle; the Saki story Reginald on Christmas Presents; several stories by John Collier; A Room with a View by E.M. Forster; The London Eye Mystery by Siobhan Dowd, The Late Mr Elvesham by Herbert G. Wells; The Wish House by Celia Rees; a The Matrix-based story, Goliath by Neil Gaiman. It features often in novels by Mark Billingham and in The Lonely Londoners by Sam Selvon. Sherlock Holmes once said that he purchased his Stradivarius from "a Jew broker in the Tottenham Court Road."

It is mentioned briefly as the location where 'I' was allegedly arrested for 'toilet trading' in the 1986 Bruce Robinson cult-classic movie Withnail and I. Mrs. Eysnford-Hill, Freddy's mother, lives in Tottenham Court Road, according to Professor Henry Higgins (My Fair Lady). Also it is where one person becomes victim to the werewolf's rampage in An American Werewolf In London.

In the Lerner/Lowe musical My Fair Lady, Tottenham Court Road is mentioned as the place where Eliza Doolittle sells her flowers.

Tottenham Court Road station was replicated as part of the set for the Queen musical We Will Rock You, which until recently played at the Dominion Theatre, directly above the actual Underground station.