In September 2008 Rann said Lance Armstrong would make his comeback at the 2009 race.[2] Armstrong's participation saw visitor numbers doubled, the economic impact more than doubled (from $17.3 million in 2008 to $39 million in 2009) and media coverage increased five-fold.[3] The 2010 Tour Down Under was named Australia's Best Major Event for the second year in a row in the Qantas Tourism Awards. Armstrong participated in three successive Tour Down Under events, retiring after 2011. The 2011 Tour Down Under had an economic impact of $43 million and crowds of more than 782,000.[4] In 2013, it attracted more than 760,400 people to Adelaide and regional South Australia across eight days, including 40,000 interstate and international visitors who travelled there for the event.

The Tour generally features stages surrounding Adelaide, from flat to undulating. There are no high mountains, giving pure climbers few opportunities. The penultimate stage involves two laps of Willunga Hill, a 3 km climb at an average of 7.6%.[5] However most tour stages finish as a bunch sprint.

Leaders of competitions within the race wear a distinctive jersey.[6] 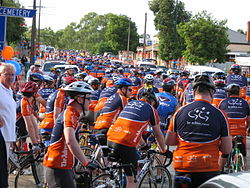 Participants in the 2005 Be Active Tour at Angaston

The Tour Down Under has a companion event, the Be Active Tour, a recreational events held over the route. The inaugural event in 2003 was known as the Breakaway Tour and attracted more than 600 riders. In 2004 riders increased to 1,400 and the event was known as the Be Active Tour. The 2005 tour saw more than 1,900 riders leave Salisbury, Williamstown and Angaston in 30 °C (86 °F) to tackle the hills and roads of stage 2. In 2006, riders rode 154 km from Strathalbyn to Yankalilla in temperatures in excess of 40 °C (104 °F). The heat took its toll on riders and a heat policy now exists.

In 2007 the name changed to Mutual Community Challenge Tour and it was joined by the Mutual Community Fun Tour and Powerade mini-tour for children. The new events are to increase the popularity of the event and attract people who do not ride regularly.[7] In 2010 there were over 8,000 participants.

There used to be a women's criterium series of three street circuits. This was sponsored by UniSA and held at the same place as the men's race, or at the end of the men's race.[8] For 2011 there was a two-race series called the Rendition Homes Santos Women’s Cup.[9]

A tradition of the Tour Down Under is that fans treat an unknown rider as a star, mobbing him at hotels and painting his name on the road. The rider must be a non-English speaking domestique who will simply act as a bottle carrier.[10] For 2010 that rider was Arthur Vichot of Française des Jeux. For 2011, the rider was Angel Madrazo of Movistar Team.[11] For 2012, the rider was Wouter Mol of Vacansoleil–DCM.[12]