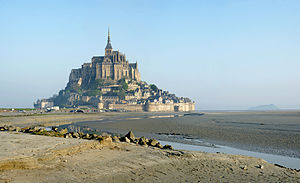 The Mont Saint-Michel in Normandy.

France was visited by 84.7 million foreign tourists in 2013, making it the most popular tourist destination in the world.[1] It is third in income from tourism due to briefer visits. 20% more tourists spent less than half as much as they did in the United States.[2]

France has 37 sites inscribed in UNESCO's World Heritage List and features cities of high cultural interest (Paris being the foremost, but also Toulouse, Strasbourg, Bordeaux, Lyon, and others), beaches and seaside resorts, ski resorts, and rural regions that many enjoy for their beauty and tranquillity (green tourism). Small and picturesque French villages of quality heritage (such as Collonges-la-Rouge or Locronan) are promoted through the association Les Plus Beaux Villages de France (litt. "The Most Beautiful Villages of France"). The "Remarkable Gardens" label is a list of the over two hundred gardens classified by the French Ministry of Culture. This label is intended to protect and promote remarkable gardens and parks.

In 2012, travel and tourism directly contributed EUR77.7 billion to French GDP, 30% of which comes from international visitors and 70% from domestic tourism spending. The total contribution of travel and tourism represents 9.7% of GDP and supports 2.9 million jobs (10.9% of employment) in the country.[3] Tourism contributes significantly to the balance of payments.

Most tourists arriving to France in 2014 came from the following countries:[4]

Most nights spent in France in 2014 by tourists from following countries:[5] 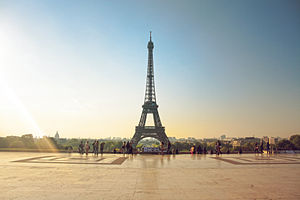 The Eiffel Tower from the Place du Trocadéro
See also: List of museums in Paris and List of tourist attractions in Paris

Paris, the capital city, is the third most visited city in the world.[6] Paris has some of the world's largest and renowned museums, including the Louvre, which is the most visited art museum in the world, but also the Musée d'Orsay, mostly devoted to impressionism, and Beaubourg, dedicated to Contemporary art. Paris hosts some of the world's most recognizable landmarks such as the Eiffel Tower, which is the most-visited paid monument in the world,[7] the Arc de Triomphe, the cathedral of Notre-Dame or the Sacré-Cœur. The Cité des Sciences et de l'Industrie is the biggest science museum in Europe.[8] Located in Parc de la Villette in Paris, France, it is at the heart of the Cultural Center of Science, Technology and Industry (CCSTI), a center promoting science and science culture. Near Paris is the Palace of Versailles, the former palace of the kings of France, now a museum. 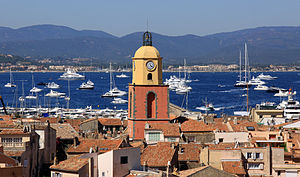 Saint-Tropez on the Côte d'Azur.

With more than 10 million tourists a year, the French Riviera (or Côte d'Azur), in south-eastern France, is the second leading tourist destination in the country, after the Parisian region.[9] According to the Côte d'Azur Economic Development Agency, it benefits from 300 days of sunshine per year, 115 kilometres (71 mi) of coastline and beaches, 18 golf courses, 14 ski resorts and 3,000 restaurants.[10] Each year the Côte d'Azur hosts 50% of the world's superyacht fleet, with 90% of all superyachts visiting the region's coast at least once in their lifetime.[11]

A large part of Provence is designed as the 2013 European Capital of Culture. Numerous of famous natural sites can be found in the region, as the Gorges du Verdon, the regional natural park of Camargue, the national park of calanques and the typical landscape of Luberon. Provence hosts dozens of renowned historical sites like the Pont du Gard, the Arles' Roman Monuments or the Palais des Papes in Avignon. Several cities also attracts a lot of tourists, like Aix-en-Provence, Marseille or Cassis, on the Mediterranean Sea coastline. 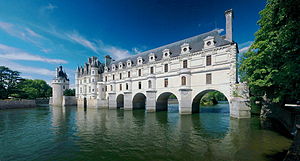 An other major destination are the Châteaux of the Loire Valley, this World Heritage Site is noteworthy for the quality of its architectural heritage, in its historic towns such as Amboise, Angers, Blois, Chinon, Nantes, Orléans, Saumur, and Tours, but in particular for its castles (châteaux), such as the Châteaux d'Amboise, de Chambord, d'Ussé, de Villandry and Chenonceau, which illustrate to an exceptional degree the ideals of the French Renaissance. 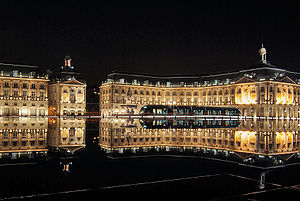 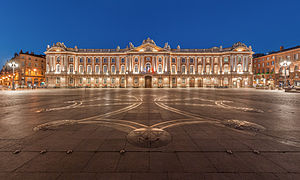 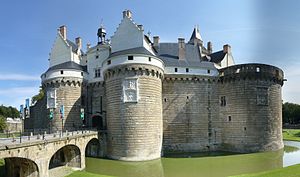 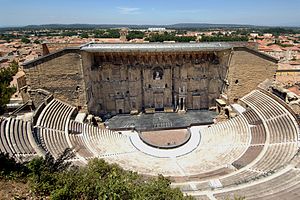 France has many cities of cultural interest, some of them are classified as "Town of Art and History" by the French Ministry of Culture. 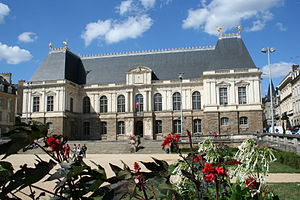 Parlement of Brittany in Rennes

The most beautiful villages of France

Locronan in Finistère, one of "The most beautiful villages of France".
Main article: Les Plus Beaux Villages de France

There are a few criteria before entering the association: the population of the village must not exceed 2,000 inhabitants, there must be at least 2 protected areas (picturesque or legendary sites, or sites of scientific, artistic or historic interest), and the decision to apply must be taken by the town council.

Other parts of France 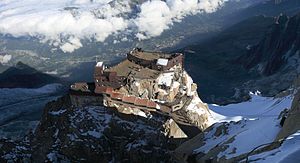 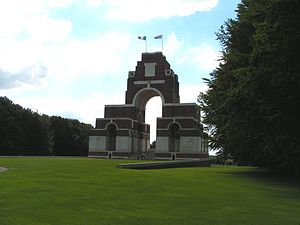 Memorial to the Missing of the Somme

In the eastern parts of France there are skiing resorts in the Alps.

France's Mediterranean beaches on the French Riviera, in Languedoc-Roussillon, or in Corsica, are famous. Away from the mainland tourists are French Polynesia (especially Tahiti), the Caribbean islands Martinique, Guadeloupe, Saint Martin and Saint Barthélemy.

The Route Napoléon, the route taken by Napoléon in 1815 upon his return from exile, leads from Golfe-Juan to Grenoble in south-eastern France. It is a scenic byway and a popular destination.[18]

Also popular are the memorials to the battles of the First and Second World Wars. Memorials to the former include the Memorial to the Missing of the Somme, while commemorations to the latter include a D-Day museum at Arromanches, one of the landing sites.

There are too a lot of great naturals sites, with important flora collections. For example, the federal Arboretum de Pézanin gather one of the richest forest collection in France, or the Regionals natural Park, which are dispersed in all the territories.

France attracts many religious pilgrims on their way to St. James, or to Lourdes, a town in the Hautes-Pyrénées that hosts a few million visitors a year. The Taizé Community has become one of the world's most important sites of Christian pilgrimage. Over 100,000 young people from around the world make pilgrimages to Taizé each year for prayer, Bible study, sharing, and communal work.

Disneyland Paris is France's and indeed Europe's most popular theme park, with 15,405,000 combined visitors to the resort's Disneyland Park and Walt Disney Studios Park in 2009.[19] The historical theme park Puy du Fou in Vendée is the second most visited park of France.[20] Other popular theme parks are the Futuroscope of Poitiers and the Parc Astérix.

Most popular sites by number of visitors 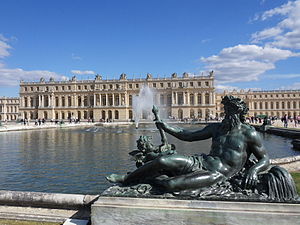 The most popular tourist sites include (visitors per year):[17][21]