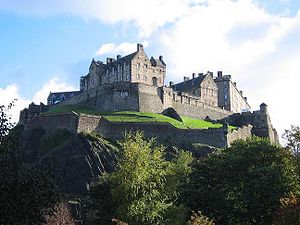 Edinburgh Castle, one of Scotland's most visited attractions 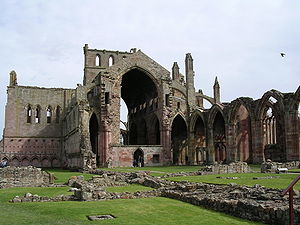 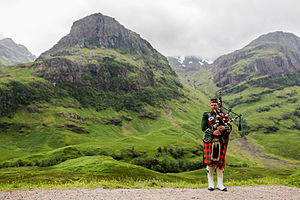 A Scottish Great Highland Bagpipe player, a symbol of Scotland's heritage, playing in front of Bidean nam Bian on the southern side of Glen Coe.

Scotland is generally seen as a clean, unspoilt destination with beautiful scenery which has a long and complex history, combined with thousands of historic sites and attractions[citation needed]. These include prehistoric stone circles, standing stones and burial chambers, and various Bronze Age, Iron Age and Stone Age remains. There are also many historic castles, houses, and battlegrounds, ruins and museums. Many people are drawn by the culture of Scotland.

The cities of Edinburgh and Glasgow are increasingly being seen as a cosmopolitan alternative to Scotland's countryside, with visitors year round, but the main tourist season is generally from April to October inclusive. In addition to these factors, the national tourist agency, VisitScotland, have deployed a strategy of niche marketing, aimed at exploiting, amongst other things, Scotland's strengths in golf, fishing and food and drink tourism. Another significant, and increasingly popular reason for tourism to Scotland - especially by those from North America - is genealogy, with many visitors coming to Scotland to explore their family and ancestral roots.

Most visitors (for any purpose) to Scotland in 2014 came from the following countries:[3]

Scotland is connected to England by a road, rail and air network. The airports Glasgow-International, Glasgow-Prestwick, Edinburgh and Aberdeen serve as the main international gateways to Scotland, with an expanding route network. In terms of international air links with Europe, the country is generally well connected, with daily flights from a variety of European cities, There are also direct flights operated from the main Scottish airports to destinations in North America such as New York, Philadelphia, Toronto, Vancouver and Calgary. The expanding budget airline network from Scotland's airports is making a significant contribution to bringing more visitors to the country.

The country is also connected to mainland Europe by a car ferry service operating daily from Rosyth in Fife to the Belgian port of Zeebrugge. Ferry services also connect Scotland with Northern Ireland, operating between Stranraer and Belfast and Cairnryan and Larne.

The ferry to Gothenburg, Sweden, from "Newcastle" (actually North Shields) in northern England (currently run by the Danish company DFDS Seaways), ceased at the end of October 2006 "DFDS scraps Newcastle-Gothenburg line", The Local, 7 September 2006: "Danish shipping company DFDS Seaways is to scrap the only passenger ferry route between Sweden and Britain, with the axing of the Gothenburg-Newcastle route at thekey route for Scottish tourist traffic from Sweden and Norway. The company cited high fuel prices and new competition from low-cost air services, especially Ryanair (which now flies to Stansted from Gothenburg City Airport), as being the cause. DFDS Seaways' sister company, DFDS Tor Line, will continue to run scheduled freight ships between Gothenburg and several English ports, including Newcastle, and these have limited capacity for passengers, but not private vehicles. It is unclear if the Newcastle-Kristiansand, Norway, route. 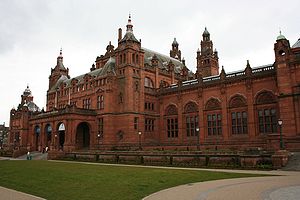 Kelvingrove Art Gallery and Museum, the most visited museum in Scotland 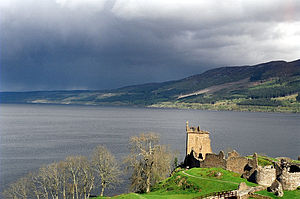 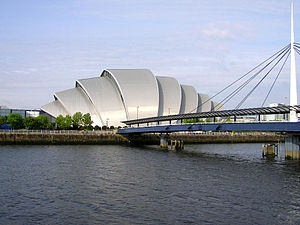 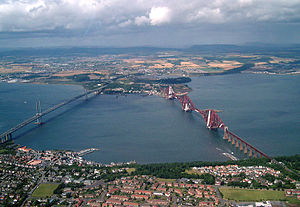 The Forth Road and Railway Bridges

Other areas which are popular for tourists include the Highlands and the Hebrides, such as the Isle of Skye. Perthshire, the Scottish Borders and Orkney and Shetland are also popular tourism destinations.

Ben Nevis is the highest mountain in the United Kingdom, but there are many other significant mountains in Scotland, though by international standards all the mountains are relatively small. The Cuillin on the Isle of Skye offer some challenging climbs, such as the Inaccessible Pinnacle.

Scotland also has some amusement parks. One such park is M&D's in the town of Motherwell, North Lanarkshire.

Scotland also has many lochs, including Loch Lomond, and Loch Ness, which is considered by some to be the home of the Loch Ness monster. There are also many rivers, which are good for salmon and fly fishing. These include the Tay, Tweed, Don, and Dee.

Scotland's best known export is Scotch Whisky and over a million visitors a year enjoy a tour around its Whisky distilleries.[4]

Scotland is a popular destination for hunting, especially deer and grouse.

Scotland is also the home of golf, with many historic and famous courses including, St Andrews, Gleneagles, Royal Troon, Carnoustie, and Muirfield. There are hundreds of other courses in the country. 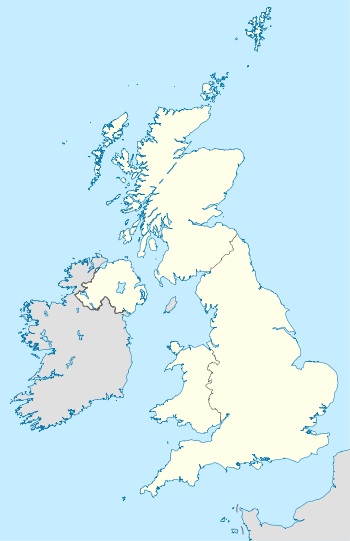