Tourism in Turkey is focused largely on a variety of historical sites, and on seaside resorts along its Aegean and Mediterranean Sea coasts. In recent years, Turkey has also become a popular destination for culture, spa, and health care tourism. In 2011, Turkey attracted more than 31.5 million foreign tourists,[1] ranking as the 6th most popular tourist destination in the world.[2]

In 2015, tourism in Turkey has declined due to the Russian economic crisis[3] and political tension resulting from a Turkish shootdown of a Russian jet. Escalating attacks from ISIS and a resurgence of government attacks on the PKK have also strained tourism.[citation needed] Experts believe Turkey will see five billion dollars in losses for 2015. Due to heightened security risks, there was 2.25% decline in tourism in the first half of 2015 alone.[4] Although, Turkey expects more than 42 million tourists and $30 billion currency inflow in 2015 despite these negative developments.[5] 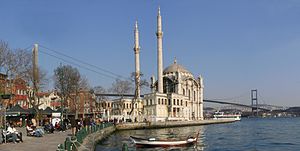 Ortaköy Mosque and the Bosphorus Bridge

Istanbul is one of the most important tourism spots not only in Turkey but also in the world. There are thousands of hotels and other tourist-oriented industries in the city, catering to both vacationers and visiting professionals. Turkey's largest city, Istanbul, has a number of major attractions derived from its historical status as capital of the Byzantine and Ottoman Empires. These include the Sultan Ahmed Mosque (the "Blue Mosque"), the Hagia Sophia, the Topkapı Palace, the Basilica Cistern, the Dolmabahçe Palace, the Galata Tower, the Grand Bazaar, the Spice Bazaar, and the Pera Palace Hotel. Istanbul has also recently become one of the biggest shopping centers of the European region by hosting malls and shopping centers, such as Metrocity, Akmerkez and Cevahir Mall, which is the biggest mall in Europe and seventh largest shopping center in the world. Other attractions include sporting events, museums, and cultural events.

In January 2013, the Turkish government announced that it will build the world's largest airport in Istanbul. The operation has an invested 7 billion euros and will have its first part of a four part plan completed by 2017.[6]

Other destinations in Turkey 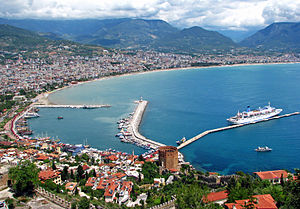 Alanya on the Turquoise Coast 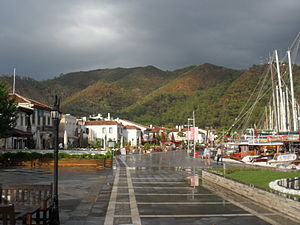 Beach vacations and Blue Cruises, particularly for Turkish delights and visitors from Western Europe, are also central to the Turkish tourism industry. Most beach resorts are located along the southwestern and southern coast, called the Turkish Riviera, especially along the Mediterranean coast near Antalya. Antalya is also accepted as the tourism capital of Turkey.[7] Major resort towns include Bodrum, Fethiye, Marmaris, Kuşadası, Çeşme, Didim and Alanya.

Lots of cultural attractions elsewhere in the country include the sites of Ephesus, Troy, Pergamon, House of the Virgin Mary, Pamukkale, Hierapolis, Trabzon (where one of the oldest monasteries is the Sümela Monastery), Konya (where the poet Rumi had spent most of his life), Didyma, Church of Antioch, ancient pontic capital and king rock tombs with its acropolis in Amasya, religious places in Mardin (such as Deyrülzafarân Monastery), and the ruined cities and landscapes of Cappadocia.

Diyarbakır is also an important historic city, although tourism is on a relatively small level due to waning armed conflicts.

Ankara has an historic old town, and although it is not exactly a tourist city, is usually a stop for travelers who go to Cappadocia. The city enjoys an excellent cultural life too, and has several museums. The Anıtkabir is also in Ankara. It is the mausoleum of Atatürk, the founder of the Republic of Turkey.

Gallipoli and Anzac Cove - a small cove on the Gallipoli peninsula, which became famous as the site of World War I landing of the ANZAC (Australian and New Zealand Army Corps) on 25 April 1915. Following the landing at Anzac Cove, the beach became the main base for the Australian and New Zealand troops for the eight months of the Gallipoli campaign. Ministry of Culture and Tourism (Turkey) understands an importance of cultural and historical heritage, that's why strongly supports local tour operators [8] who offer Gallipoli region visit for commemoration services to Australians, New Zealanders and British. 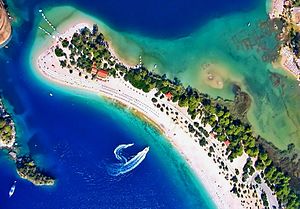 During the 1990s, the PKK tried to damage the Turkish tourism industry by bombing hotels.[9][10] Kidnappings of foreign tourists were also reported in this period.[9][10] An academic article published in UK-based peer-reviewed economics journal called Applied Economics by Mete Feridun of University of Greenwich in 2011 presents strong econometric evidence that Turkish tourism sector is severely damaged by PKK terrorism.[11]

Due to the recent flare in violence, nine countries have issued travel advisories. Seven of these countries, which include New Zealand, Australia, Italy, Britain, Poland, Ireland and Canada, discouraged their citizens to visit the eastern part of Turkey. Some countries have also issued advisories concerning public transportation within metropolitan cities throughout Turkey. Germany and Russia have discouraged their citizens to visit places near the border.[12] Following the 2015 Suruç bombing, the British Foreign Office highlighted a heightened threat of attacks but did not advise against travel to Turkey, as the vast majority of Turkey remained "perfectly safe" to visit.[13]

On 3 September 2015, due to the recent violence concerning the Turkey-Islamic State conflict, the United States State Department released an advisory about the ongoing violence in Turkey. In the advisory, the State Department notes that militants have conducted attacks on U.S. interests in the country and that there's a potential for recurring violence.[14] On 9 April 2016, due to additional "credible threats" of violence, the United States released a warning for its citizens to refrain from visiting popular tourist areas such as Antalya and Istanbul.[15][16]

Foreign tourist arrivals increased substantially in Turkey between 2002 and 2005, from 12.8 million to 21.2 million, which made Turkey a top-10 destination in the world for foreign visitors. 2005 revenues were US$17.5 billion which also made Turkey one of the top-10 biggest revenue owners in the world. In 2011, Turkey ranked as the 6th most popular tourist destination in the world and 4th in Europe, according to UNWTO World Tourism barometer.[2] See World Tourism rankings. Also Turkey has been chosen second in the world in 2015 with its 436 blue-flagged beaches, according to the Chamber of Shipping.[17]