Trabzonspor is a professional Turkish football club located in the city of Trabzon, Turkey. Formed in 1967 through a merger of several local clubs, Trabzonspor have won six Süper Lig championship titles. The Club won their first Championship title in 1975 which is also the Club's inaugural year in the Süper Lig. Trabzonspor won the championship title again during their second year in the league in 1976, finished runners-up in 1977 and won 3 Championship titles in a row during the following years 1978, 1979, 1980. The club colours are claret and blue, and they play their home matches at Hüseyin Avni Aker Stadium.[1] The club has donned maroon and blue kits since the merger, and have played at their present ground since 1967.

Domestically, Trabzonspor is known as one of the top Turkish teams based on the number of cups won. They have won the Süper Lig (top-flight) six times, and were the first non Istanbul-based club to win the league. They have also won the Federation Cup (Turkish Cup) eight times. From 1976 to 1984, Trabzonspor have won a total of 30 trophies: Süper Lig (6), Federation (Turkish) Cup (8), Süper Kupa (Super Cup) (8), the Başbakanlık Kupası (Chancellor Cup) (5), Red Group Championship Second Division (İkinci Lig Kırmızı Grup Şampiyonası) (1) and Cyprus Peace Cup (Kıbrıs Barış Kupası) (1).[2]

In the 1973–74 season finally the club achieved promotion to the Turkish First League with a playoff victory over Zonguldakspor.[citation needed] 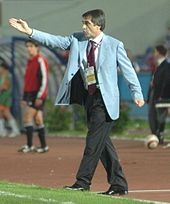 In Trabzonspor and Turkey, he, Şenol Güneş, served as both player and manager.

Between those years, the club tries to change the culture in itself. They were always finishing the league between 3rd and 7th place. 1992–93 season’s first 10 week was their worst season opening, they were down by 10 points from the leader. However, Ünal Karaman, one of the best players in Trabzonspor history, gained by the club. He was later captain of the Turkey. There was also Tolunay Kafkas. The club won 2 Turkish Cups (1992, 1995), won a Presidential Cup (1995), and won 2 Chancellor Cups (1985, 1994). In 1994–95 and 1995–96 seasons, they finished the league in the second place.

In 2001–02 season they finished the league in 14th place.[citation needed]

In 2008, Sadri Şener became the president of the club.[citation needed]

At the end of the 2010–11 season Trabzonspor points were tied with Fenerbahce SK. However Fenerbahce became the champions by goal difference.[6] Two months has passed after the end of the season and 2011 Turkish sports corruption scandal broke out. Turkish Football Federation has banned Fenerbahce from joining any UEFA competition for a year. Trabzonspor's board of directors has applied to Turkish Football Federation about this season's champions being them but their application was denied on the grounds that this season's decision already being made.[7] 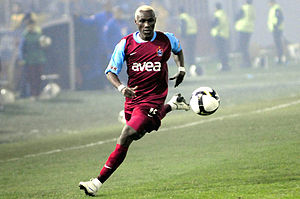 The claret and blue shirt

The most important issue in the establishment of Trabzonspor was the colors of the club. Although a number of elaborate theories have been put forward as to why claret and blue was adopted, it transpires the club chose the colors in simple tribute to the famous and historic English club Aston Villa F.C.[8] and also to the claret and blue of an Irish club Drogheda United F.C. Trabzonspor short name is "TS" and in its emblem those characters are written. There is written 1967 where those two characters intersects. There is also a ball over those letters in order to show all sport activities and also a yellow star in order to show 6 championships. The emblem was registered to club at 2003, May 16.[citation needed]

Their home ground is the Hüseyin Avni Aker Stadium, which has a capacity of 24,169.[9] 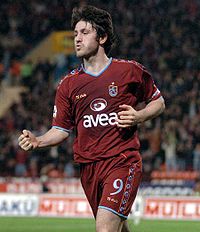 Trabzonspor A2 is a youth team of Trabzonspor. The club competes in the A2 league, alongside other A2 clubs around Turkey. The A2 team is made up of players between the ages of 18 and 20, and it is the last level of amateur play before a footballer reaches professional status in Turkey. Notable former players include Hami Mandıralı (highest capped Trabzonspor player (558 times)),[11] Gökdeniz Karadeniz (most caps for the Turkish national team by a Trabzonspor player (50)), Fatih Tekke (2004–05 Süper Lig top scorer (31 goals)),[12] Hüseyin Çimşir, Mehmet Yılmaz, Tolga Zengin, and Metin Aktaş.

Trabzonspor Kulübü Bayan Futbol Takımı are a Turkish women's association football club affiliated with Trabzonspor. The club was founded in 2007, and won its first league title in 2009.[13]

In 2008, Trabzonspor bought Trabzon Karadenizspor (now 1461 Trabzon) to act as a feeder club, having first option on players, as well as being able to loan out youngsters to gain first-team experience.[14]

The club also agreed to an affiliation deal with Dutch club MVV the same year, allowing them first option on their players. The first step in the affiliation deal came when Trabzonspor transferred Christian Brüls and Faty Papy and loaned them back to MVV.[15]