Trade route from the Varangians to the Greeks

The trade route from the Varangians to the Greeks (Russian: Путь «из варяг в греки», Put iz varyag v greki, Swedish: Vägen från varjagerna till grekerna, Greek: Εμπορική Οδός Βαράγγων - Ελλήνων) was a trade route that connected Scandinavia, Kievan Rus' and the Byzantine Empire. The route allowed traders along the route to establish a direct prosperous trade with Byzantium, and prompted some of them to settle in the territories of present-day Belarus, Russia and Ukraine. There was a long-distance waterway including the Baltic Sea, several rivers flowing into the Baltic Sea, and rivers of the Dnieper river system with portages on the drainage divides.

The route began in Scandinavian trading centers such as Birka, Hedeby, and Gotland, crossed the Baltic Sea, entered the Gulf of Finland, followed the Neva River into the Lake Ladoga. Then it followed the Volkhov River, upstream past the towns of Staraya Ladoga and Velikiy Novgorod, crossed Lake Ilmen, and up the Lovat River, the Kunya River and possibly the Seryozha River. From there, a portage led to the Toropa River and downstream to the Western Dvina River. From the Western Dvina, the ships went upstream the Kasplya River and were portaged again to the Katyn River, a tributary of the Dnieper. Along the Dnieper, the route crossed several major rapids and passed through Kiev, and after entering the Black Sea followed its west coast to Constantinople.[1] 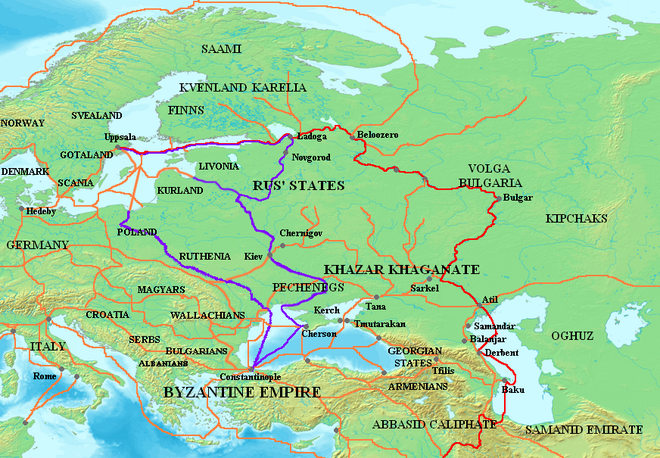 Map showing the major Varangian trade routes: the Volga trade route (in red) and the trade route from the Varangians to the Greeks (in purple). Other trade routes of the 8th to the 11th centuries shown in orange. 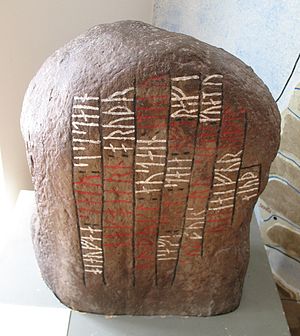 A coloured copy of runestone G 280 which talks of death in the Dnieper rapids.

The route from the Varangians to the Greeks was first mentioned in the Primary Chronicle, but its effects were reported much earlier, in the early ninth century when the Byzantines noted newcomers in their regions, the Varangians. Though this has come to mean “Vikings” to many, the term for the Byzantines meant all Scandinavians and their kindred living in what is now Russia.

The route was probably established in the late eighth and early ninth centuries, when Varangian explorers searched for plunder but also for slaves and lucrative goods. The route gained significant importance from the tenth until the first third of the eleventh century, concurrently with the Volga trade route and the trade route from the Khazars to the Germans.

According to Constantine VII, the Krivichs and other tribes dependent on Kiev transported hollowed-out sailboats, or monoxyla, which could accommodate thirty to forty people, to places along the rivers. These sailboats were then transported along the Dnieper to Kiev. There they were sold to the Varangians who re-equipped them and loaded them with merchandise.[2]

Places named include Smolensk (Μιλινισκα), Liubech (Τελιουτζα), Chernihiv (Τζερνιγωγα), Vyshhorod (Βουσεγραδε), Vytachiv (Vitichev, Βιτετζεβη), and Kiev (Κια[ο]βα). Some of these cities had alternate names in Old Norse, and Constantine quotes some of them: So Novgorod (Νεμογαρδα) is the same as Hólmgarðr (‘Island Enclosure’) and Nýgarðr (‘New Enclosure’); Kiev is equally called Kœnugarðr (‘Boatyard’) or Σαμβατας, which might derive from Norse Sandbakki-áss (‘Sandbank Ridge’). Though Constantine Zuckerman suggests a more obvious etymology, from the Turkic (Khazar) roots sam and bat (literally, ‘upper fortress’).[3] The runestone N 62 preserves the name Vitaholmr (‘demarcation islet’) for Vytachiv.

On the Dnieper, the Varangians had to portage their ships round seven rapids, where they had to be on guard for Pecheneg nomads. The rapids began below Dnipropetrovsk where the river turns south and fell 50 meters in 66 kilometers. They don't exist anymore, as a chain of basins was established starting from the 1950s to the 1970s.

Below the rapids, they had to pass a narrow rocky spot called the Ford of Vrar (Russian: Krariyskaya crossing), where the Varangians were often attacked by the Pechenegs. The Varangians stopped at St. George Island. Then they equipped their ships with sails in the Dnieper estuary and continued to navigate along the western shore of the Black Sea all the way to Constantinople (Slavic: Tsargrad, Old Norse: Miklagarðr).

The Trade Route from the Varangians to the Greeks was connected to other waterways of Eastern Europe, such as the Pripyat-Bug waterway leading to Western Europe, and the Volga trade route, which went down the Volga waterway to the Caspian Sea. Another offshoot was along the Dnieper and the Usyazh-Buk River towards Lukoml and Polotsk.

The Trade Route from the Varangians to the Greeks was used to transport different kinds of merchandise. Wine, spices, jewelry, glass, expensive fabrics, icons, and books came from the Byzantine Empire. Volhyn traded spinning wheels and other items. Certain kinds of weapons and handicrafts came from Scandinavia. Northern Rus' offered timber, fur, honey, and wax, while the Baltic tribes traded amber.

In the second half of the eleventh century, the Crusades opened more lucrative routes from Europe to the Orient through the Crusader states of the Middle East. By that time, Rus' had strengthened its commercial ties with Western Europe, and the route from the Varangians to the Greeks gradually lost its significance. For a related military route, see Muravsky Trail.