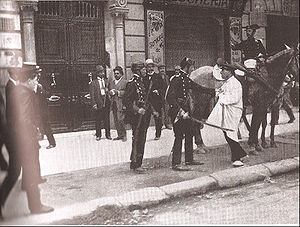 Suspects rounded up by the Civil Guard.

Tragic Week (in Catalan la Setmana Tràgica, in Spanish la Semana Trágica) (25 July – 2 August 1909) is the name used for a series of bloody confrontations between the Spanish army and the working classes of Barcelona and other cities of Catalonia (Spain), backed by anarchists, socialists and republicans, during the last week of July 1909. It was caused by the calling-up of reserve troops by Prime Minister Antonio Maura to be sent as reinforcements when Spain renewed military-colonial activity in Morocco on 9 July, in what is known as the Second Rif War.

Minister of War Arsenio Linares y Pombo called up the Third Mixed Brigade of Chasseurs, which was composed of both active and reserve units in Catalonia. Among these were 520 men who had completed active duty six years earlier, and who had not anticipated further service. One could hire a substitute if one did not wish to fight, but this cost 6,000 reales which was beyond the means of most laborers. (Workers did not receive more than 20 reales or 5 pesetas a day.) The flashpoint occurred when "a party of conscripts boarded ships owned by the marques de Comillas, a noted Catholic industrialist, en route for Morocco. The soldiers were accompanied by patriotic addresses, the Royal March, and religious medals distributed by pious well dressed ladies. Spain's narrow social construction was thus on display for all to see, an affluent Catholic oligarchy impervious to the rise of secular mass politics. As the crowd jeered and whistled, emblems of the Sacred Heart were thrown into the sea." [1]

These actions, coupled with anarchist, anti-militarist, and anti-colonial philosophies shared by many in the city (Barcelona later became a stronghold for the anarchists during the Spanish Civil War), led to the union Solidaridad Obrera - led by a committee of anarchists and socialists - calling a general strike against Maura's call-up of the reservists on Monday 26 July 1909. Although the civil governor Ángel Ossorio y Gallardo had received ample warning of the growing discontent, acts of vandalism were provoked by elements called the jóvenes bárbaros (Young Barbarians), who were associated with the Radical Republican Party (Partido Republicano Radical) of Alejandro Lerroux. By Tuesday workers had taken over Barcelona, halting troop trains and overturning trams. By Thursday, there was street fighting, with a general eruption of riots, strikes, and the burnings of convents.

Many of the rioters were antimilitarist, anticolonial and anticlerical. The rioters considered the Roman Catholic Church to form part of the corrupt bourgeois structure whose sons did not have to go to war, and much of public opinion had been turned against the Church by anarchist elements within the city. Thus not only were convents burned, but sepulchers were profaned and graves were emptied.[2]

After disturbances in downtown Barcelona, security forces shot at demonstrators in Las Ramblas, resulting in the construction of barricades in the streets and the proclamation of martial law. The government, declaring a state of war, sent the army to crush the revolt. Barcelonan troops stationed in the city, many of whom had working class roots, refused to shoot workers and so troops were brought in from Valencia, Zaragoza, Pamplona and Burgos; these finally crushed the revolt, causing dozens of deaths.

Police and army casualties were eight dead and 124 wounded. Of the civilians, 104–150 were reportedly killed. Over 1,700 individuals were indicted in military courts for "armed rebellion". Five were sentenced to death and executed (including Francesc Ferrer, founder of the Escuela Moderna); 59 received sentences of life imprisonment. Alejandro Lerroux fled into exile.

General European condemnation in the press was immediate. King Alfonso XIII, alarmed by the reaction at home and abroad, removed Prime Minister Antonio Maura from power in its wake, replacing him with fellow conservative Segismundo Moret.